At 4.30am I get out of bed in Scotland, by 6am we're driving across Rannock Moor. By 2pm we are home. Just enough time to de-hair the car, Doggo has left it in quite a state, before we retrace our steps back down the A50 to Stoke. Tonight we are at Keele University Students’ Union to see the much-hyped Hoosiers.

On the way in Daughter gets her hand stamped with a big red cross as if she's diseased, carrying the plague, but no it just means she can’t partake at the bar. Naturally this doesn't stop her wanting to get us thrown out for buying her a WKD. We don't of course. She's probably not the only one because it’s a very young audience tonight which doesn’t bode well musically. It’s a wonder anyone is getting the over 18 stamp like L and I.

The band have encouraged their fans to come in fancy dress and quite a few have. There’s a motley array of fairies, nuns, even a Star Wars stormtrooper, along with the predictable 'Cops and Robbers'. Daughter catches a dummy that I assume someone has thrown out of their pram. L and I have come as ‘old people’, Daughter says she’s come as someone ‘who isn’t with us’.

The second of two support acts, we miss the first one, are a very polished trio from Dublin called ‘The Script’. Rather too polished if you ask me. I’ve not seen many bands dim the lights and do a triumphant entrance to their own backing track when you’re only playing six songs as the warm up act. In fact I haven't seen any. The reason for their polish becomes clearer when I look them up later and find out that all three band members are established producers who have spent many years producing for other artists in Los Angeles. They have all the gimmicks:- text us for a free download etc etc, they have an iTunes only release out now but their debut single ‘We Cry’ isn't out until March. I think they’re terribly dull. I’m sure they’ll be huge. 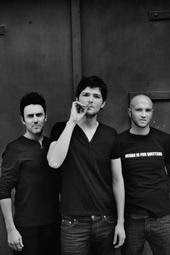 From the moment the Hoosiers arrive on the bedecked stage waving huge letters spelling out their name, you know that this gig isn't just going to be about the music. The three band members are accompanied by two skeletons, who turn out to be their backing band and the whole lot arrive on stage straight of the closet or is it a giant wardrobe. There's a superhero straight out of 'Mr A' on keyboards.

The band are fronted by the not so shy and aptly named, Irwin Sparkes. Whom I've heard described as Ben Stiller meets Frodo Baggins, which is spot on. He certainly seems to appeal to the folks down the front who appear to be mainly young girls whipping themselves into a frenzy.

Irwin doesn't have a monopoly on great names, the drummer is called Alfonso Sharland and the bobble hated Swedish bassist is called Martin Skarendahl.

Having opened with a lively 'Worst Case Scenario', things tail off a little as Irwin turns into Mika on ‘Run Rabbit Run’. With only the one album, ‘The Trick of Life’, to pull tracks from, the band treat us to all of it but when they play the slower songs the young crowd soon seem to get bored and our man Irwin is drowned out by the chatter of the crowd. He has a strong almost falsetto voice and he likes to show it off but it starts to grate after a while. They do play one new song which hints at their inner indie fighting to get out. 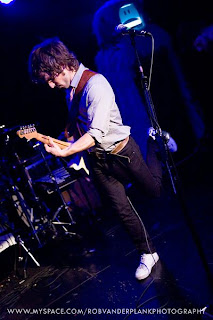 The band rely on their enthusiasm, of which they have plenty and a few gimmicks, cowbells and other odd musical asides, to make up for their lack of material. The band, and in particularly Irwin, are clearly having a ball, and this carries the gig but it has to because only occasionally when things start to flag can they lift the crowd with their music. Such as when they throw in their infectious ode to ELO and Supertramp 'Goodbye Mr A'.

Other times they rely on props, such as when three large balloons are thrown into the crowd. The highlight of the night is when one wipes out a crowdsurfer and fetches down a security guard at the same time. The balls play havoc with the equipment, regularly knocking down the microphone stands.

After only 50 minutes the band leave the stage after closing with the forthcoming single, the aforementioned, 'Cops and Robbers'. They return with Skarendahl dressed as if auditioning for a part in ‘Finding Nemo’ although Daughter assures me it's something to do with Torchwood.

After a solo number from Irwin the band play a highly ambitious cover of one of Billy Joel’s finer moments 'We Didn’t Start the Fire' because, they tell us, they have run out of their own songs. Err, well apart from a certain debut single, the name of which escapes me right now... Oh yes that’s the one. They break the golden rule of playing live and save their biggest song ‘Worried About Ray’ till last.

For a band with a lot of hype to live up to, they turn out to be rather ordinary. Energetic, jaunty and fun but ordinary. I can’t help thinking Fratellis syndrome. Where do they go from here? With not so jolly lyrics buried within their happy sound there might be hidden depths. They need to discover them.

Still in costume, L and I, do what 'old people' do and share a flask of coffee on the way home.
Posted by FitForNothing at Saturday, February 16, 2008