I'm on the bike today despite the fact I have squash tonight, I'm sure I'll regret this later. The plan is to give myself a couple of day off before we do the Doncaster Nine Mile Race on Sunday. This is just a training run you understand. The biggy is Clumber next week.

It's a glorious morning although a bit cold. L has the cheek to text me to point out just how glorious it is, because she assumes I won't have noticed. She'll be accusing me of not looking at the view next.

I have a bit of trouble on the bike. An old chap, he must have been about eighty, cuts me up on his shopper bike coming out of a side street in Wollaton. Then he's off down the road pedalling like the clappers, pushing a very big gear. It takes all my effort to stay with him. How embarrassing. It's not as if he even looks like a cyclist, no gear, no helmet, just a tweed jacket and a flat cap. I've no idea how he keeps the cap on his head, he must have it glued on.

Luckily the hill up to Balloon Wood slows him down and I go past him. The problem now is that I have to stay in front. Luckily he goes straight on at the lights when I turn left, which allows me to relax, free wheel and drink my Camp.

In the news today is a year old Government review, which reveals that of the 2.7 million people claiming incapacity benefit, only 700,000 need it (no surprise to most of us) and a dog doing silly tricks. Any connection? 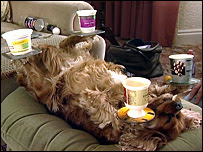 After cycling home I have quick snack as I kick the blessed dog's ball again. We have no bread, so I have naan bread topped with cheese instead. Rather nice actually. Then I run a taxi service for Daughter and a couple of friends who are going to see Derek, sorry I mean Deryck, Whibley. That's Sum 41. Wonder why he misspelt his Christian name, you'd have thought he'd have wanted to disguise his surname. He's also know as Avril Lavigne's husband and judging by the ticket price he's saving up to buy her something nice. Perhaps a joint name change by deed poll? 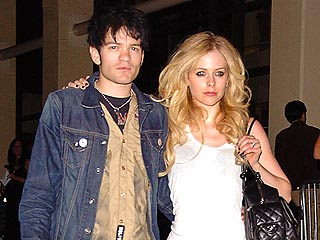 L is stuck at work and is planning her alcohol units already. So hopefully it's early to bed with a whisky again. She says she's having a Leffe chaser first. So I offer to taxi the girl's home as well, I just hope she stays sober enough to thank me, in any case I might want to nip in and get a t-shirt.

L puts the mockers on that, not that I'm serious, by saying she'd never shag anyone in a Sum 41 t-shirt. I think this could put the purchase of other tour t-shirts in doubt. I don't know, some chaps hide their mucky magazine collection under the bed; I'd be hiding my Wombats t-shirt there.

Somehow, between dropping off and picking them up, I fit in my game of squash. As expected, I now have conclusive proof that cycling and squash don't mix. My legs are very heavy, not that it probably makes any difference. I don't do any worse than last week. I lose 4-0 but should have won the fourth game that in the end went to 19-17. We're in the middle of a close 5th when we get chucked off.

After a post match pint and a half from the latest in the Whippet range, the phone rings. It's Daughter, it's only ten o'clock, and they've finished already. I think she is carrying a few bruises after going down the front for the first time and moshing to Mr Whibley.

Back home, taxiing complete, I chill with an Isle of Skye Stout and L's Salmon curry. Then we both take a large whisky to bed and I valiantly save L from the Dark Kitkat, 67% cocoa not bad but not great, that she's bought. She says its the buying and not the eating that's therapeutic. Hmmm. We'll see what happens to the other one...
Posted by FitForNothing at Thursday, February 28, 2008