What Else Goes With Pickled Walnuts?

It's hard work getting out of bed this morning, although we all seem to be having the same problem, L and Doggo too and particularly Daughter. I'm well knackered but I bike anyway and guess what? Just to make things worse it's windy too.

Nothing much to report during the day. L's email is down again but she does make contact by text over lunch, to tell me that's she in town looking for Torchwood and picked walnuts. How quaint.

I do spend a joyful afternoon working to the dulcet sounds of Scott Walker and his epic 'Clara', on which he used a slab of meat as a percussion instrument. The song is about Mussolini's mistress Clara Petacci, who was twenty-nine years younger than him. They both end up shot and then hanged upside down. Their bodies were heavily beaten by the people, hence his use of the meat. She was 33; he was 62. 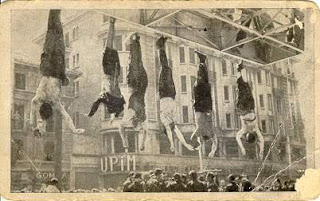 It's possibly even windier on the way home but a least it's blowing my way. At the traffic lights in Bramcote, I pull up alongside a car and a young blonde girl smiles and waves at me. Being a polite sort of a chap I smile and wave back. She was probably only about two years old and in a child seat but you have to take all the smiles you can get.

The ride takes just over 50 minutes, which is good, not far off a PB but I don't get excited for anything over 50. At least not this week.

L's at home waiting for me, armed with pickled walnuts in port. I'm not sure if that sounds wonderful or disgusting.

We 'chill' in the bedroom for a bit and then head up to the Plough for the usual mix of Legends and too many Supremes. Then back home for Jools and a naughty glass of port but what else goes with pickled walnuts?
Posted by FitForNothing at Friday, February 22, 2008