It's The Body That Grows Old, Not The Man

A morning spent taking on board the NHS's advice on how to get fit and look younger. We stay in bed. We do our exercises twice, just to be on the safe side.

The kids are out on their paper rounds, keeping the neighbourhood up to date on what's happening in the world or rather who's dumping who in the world of showbiz. Daughter pops home between her two rounds to let us know how it's going. I gather the verdict was 'not well'.

Then I drag my freshly re-energized bones and muscles on to the park with Doggo and his ball. No one remarks on my younger look.

We encounter a one-eared lion guarding the entrance to the hall. We wander over to have a look. It looks like a model of one of the lions in the Market Square. Doggo isn't fazed by it and would even have marked it as his territory had there not been a barrier around it.

After a quick trip into town with L, I settle down to listen to the lads up at Wigan, which proves to be a total waste of an afternoon. Even Paul Jewell seems to be losing his cool at the manner of the latest defeat.

I cook a curry which Daughter seems to suspect could be hot. She could be right, when I cook one for L and I it usually ends up mild but when I do one for all four of us it ends up evilly hot. She enquires whether we have any natural yoghurt to extinguish the fire with. We do but it's gone a bit mouldy, but I'm not cruel enough to serve her that. Luckily we have a fresh carton in the fridge. What I don't tell her is that the better bits of the mouldy one end up in the curry sauce. What do they call it? Friendly bacteria?

After tea we head down to the Social. Another gig and although tonight's was originally my suggestion, I was a bit lukewarm about but L seems very keen, so we give it a go. She's really into her gigs at the moment. This is the girl who used to prefer putting the CD on. Now she seems heavily into the whole live music experience. I’m not complaining.

We go nice and early because it’s supposed to have a 10pm curfew but this turns out to be incorrect information. So we’re in plenty of time to catch all three bands. They are a three piece called The Sugars. To me, they look and sound like a harder version of the Raveonettes. They also have quite an American sound, although they are actually from Leeds. As their set runs out of time they enquire as to whether they’ve got time for one more. In the end they cheekily slot in two back to back. Not bad. 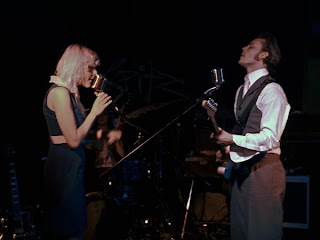 Before the second band come on we grab a drink from the bar. I have a Newcastle Brown but L risks an Asahi, which doesn’t taste of much at all but what it does taste of, isn’t pleasant. We then reserve ourselves a good spot quite close to the front. I was a bit concerned that in such a small venue things could get a bit manic down the front but on the front row is an old chap with beard, a woolly hat, and walking stick. Perhaps it’s not going to get that manic after all.

Next up are Fight Like Apes from Dublin. They take so long setting up their kit that they only get to play twenty minutes. They’re a bit like another band I like, the SemiFinalists, that is if you crossed them with the Goodies. This is because the keyboard player reminds me of a young Bill Oddie. Oddie or ‘Pockets’ as he wishes to be known rushes around the stage in true Goodies style. He also had a head torch strapped to his forehead, performing a one-man light show. 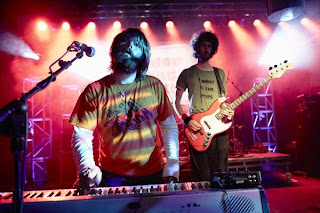 The singer is girl known as McKay, who for reasons unknown brings a thermos flask on stage with her. She’s a bit of a screamer, rather frightening but also rather good at it. There’s also a drummer and a bass player, who shares a pair of rather un-fetching novelty sunglasses, equipped with flashing lights, with McKay. 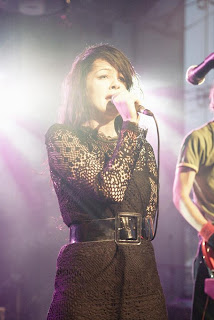 Musically they’re actually rather good but the appreciative crowd doesn’t really know when to applaud because they don’t appear to be taking any breaks between songs. Either that or it’s all one long song. Eventually they do take a breather, cue applause. Our friend with the beard is totally loving it and getting on rather well with the lead singer. Can't see her inviting him back stage though.

Whatever happened to Detroit’s Von Bondies? They seemed about to hit it big but then they just disappeared into obscurity. Tonight, after a three-year break they’re most certainly back, or at least some of them are. Of the original four-piece only front man Jason Stollsteimer and drummer Don Blum remain. Both female members have departed to be replaced like for like. There's a new girlie on guitar and occasional keyboards, although she needn’t have bothered with that because it’s barely audible over the constant fuzz of the guitars. There's also a new female bass player, the fourth in an ever-changing stream of girls to have picked up the bass guitar. How does Jason get through so many female bassists? Both show they can play. There’s also the addition of a third guitarist. Quite why they need three is anyone’s guess.

They take the stage and promise to play some good old-fashioned rock n roll and they don’t disappoint. With little conversation but plenty of head shaking, by band and crowd alike, they get on with their set of no frills guitar rock. Our bearded friend is well into it, showing that it's the body that grows old, not the man.

Overall it’s quite an old crowd tonight. I’m obviously not the only one still harking after that unfashionable Ramones sound. The bands songs are almost all high powered two-minute guitar romps, simple but effective. Musically, it’s hardly ground breaking but I’m suitable impressed. Stollsteimer snarls at us, the guitars whine and the thundering bass and clockwork drumming pound at your skull. Excellent. They’re a lot rawer than on record. After about a dozen songs in I glance at my watch and see they’ve only been on stage for 25 minutes. 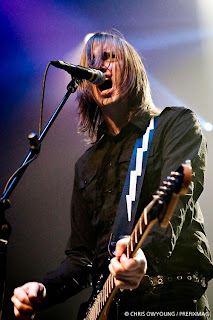 They give us a mix of tracks from the two albums they’re produced in seven years. Yep not exactly prolific. They tell us a third is finally on the way. It will be called 'Love, Hate and Then There's You' which is a great title.

The favourites are all played, although predictably ‘C'mon C'mon’ goes down the best. The girls take the vocals on ‘Not That Social’, a song about the anti-social non-drinking habits of the bass player but not this bass player, one of Jason's ex's. Perhaps Stollsteimer should use bass player Leann Banks’s vocals more often, she does an excellent duet with him on the bluesy ‘No Sugar Mama’. 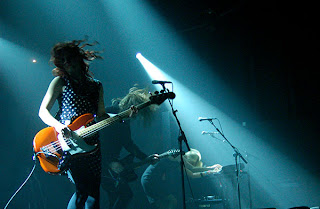 They don’t say much but they do introduce a softer track ‘21st Birthday’ from their new ‘We Are Kamikazes’ EP and drummer Don Blum’s gets to sing for us on 'Rock n Roll Nurse'.

They close with a storming ‘Broken Man’ and go off stage after about 55 minutes. A short set just like the Hoosiers but in that time playing probably three times as many tracks. They’re close to curfew time but would have had time to come back for one more but nothing can pull them back to the stage. No encore tonight.

The old man is putting his hat and coat back on, picking up his walking stick and winding his scarf around his neck. With the set list in one hand and a poster in the other he wanders off into the night. I wonder if he’s off home to the wife or perhaps he’s off up to catch alternative night at Rock City. Youngsters eh?

We retire to the Ropewalk for several nightcaps. A couple of Robinsons and a couple of Leffe’s. L tries something very nice called Innis and Gunn but it’s also terribly expensive. We forget the time, that is until they start throwing people out at 1am. Oops, we’ve never been there that late before. A very good night out.
Posted by FitForNothing at Saturday, February 23, 2008