It Was The Butler Who Did It

Back dodging the potholes on the bike today. It seems particularly hard work after a day off.

It's in the news today about a 19-year-old lass from Darlington who paid £80 to have her boyfriend's nickname 'Roo' tattooed on her stomach as a sign of her undying love for him. Now casting aside the obvious question of why she would want to go out with someone who calls themselves 'Roo' in the first place, there are still two problems with this. Firstly teenage love isn't 'undying' and naturally they split up soon afterwards but also her local Chinese takeaway told her it actually spelled out 'supermarket'. Priceless, wonder what nicknames they call her now. I can think of a few...

I bike home and there's no welcoming party. So L must have been able to persuade the reluctant one to come out from under the kitchen table and go for a run with her.

It's been quite a week and there's no let up tonight. L and I head into town to the Social, sorry the Bodega Social as it's now known, to catch Brakes front man Eamon Hamilton play am acoustic solo set. We're not expecting a large crowd, for a start our tickets are number 1 and 2. We grab a drink and mingle with the dozen or so others.

First up is a chap called Rob from Stourbridge, who calls himself The Voluntary Butler Scheme and is very much a one-man band. Apparently he's used to be the drummer in a band called 'The School', who I haven't heard of, and also 'The Boy Least Likely To', who I fleetingly have. The main man, Eamon, is in the 'crowd' too.

First thing L says when he comes on stage is that he's a ringer for Son, same hair, same downward gaze, same mumbling articulations. Main difference is that he's a brilliant singer and talented multi-instrumentalist. Of course Son could be too and we just don't know it.

Rob plays some very catchy pop songs using a variety of instruments and all accompanied with some great lyrics. He's not so eloquent between songs, at one stage he appears to start to explain why he's called himself the Voluntary Butler Scheme but then appears to give up mid-sentence. 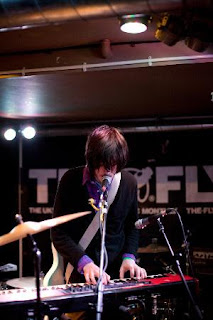 So impressed are we that afterwards we try and find the man himself to buy his CD but he's already legged it. We find out later that he does have an EP available for free, it's called 'The Vol-Au-Vent EP' and you can download it from his myspace page. It's very short, in total all four tracks last a little over three minutes. He describes it as a lunch break worth of ideas.

So to Eamon and the crowd has swelled to about 25 people, if you count the bar staff. Eamon doesn't look bothered about the small crowd; he just seems to love playing. Complete with his set list jotted down on back of his guitar he works his way through some of the Brakes lighter moments, along with a smattering of new tracks. He also plays a few of the quicker numbers such as ‘Porcupine or Pineapple’ and ‘Ring A Ding Ding’, which still come over well. It's a very friendly affair in front of us hardcore fans. 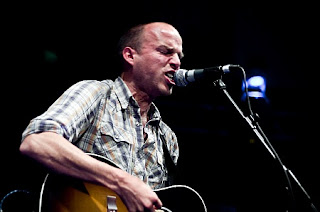 Near the end he announces he's going to do two more songs but then starts to take requests from the crowd, playing 'No Return' and 'Heard About Your Band' before returning to his set list. He closes the set with another request 'Comma Comma Comma Full Stop' and asks the requester to count him in.

He comes back to encore with 'Jackson' and a very brief new number before we all headed home to our collies.
Posted by FitForNothing at Thursday, February 07, 2008