It All Started With Half An Hour Of Adverts

A shorter lie-in this morning followed by a timed 5k along the route used for the Nottingham Grand Prix race. In the 'heat' of the race I hadn't noticed how hilly it was. It's also windy today so this hopefully, combined with the lack of anyone to race against, explains a time of 22.19. After this I join L and Doggo and we run a few more miles. Doggo is appalled when we leave the park and don’t head home but to the pond instead. Still it’s not over and after the pond we finish off with another sojourn through the park.

In the afternoon I drop my skis off in town. I've finally found somewhere that service skis, although I'm not hopeful of seeing them again before our Austria trip but they do need doing, so it's worth the risk. In town there's nowhere to park unless you want to part with a lot of cash, so I look for a parking meter, 60p for 30 minutes will do me and no ever uses them so there should be loads free. That is, except for on a Sunday when they’re free to use, so everyone parks there. Takes me ages to find a free one and I still get a long walk.

L does Lasagne for tea. Excellent, almost as good as mine! We wash it down with pino colada, it's out of carton and without the rum but it's not bad for an AF night.

In the evening we're at the cinema. We're risking the Showcase because they’re not showing this one at Broadway and my last experience of the Savoy was not memorable. We arrive for the 7.10 showing but by 7.40 we are still waiting for the film to start. They subject us to advert after advert, even either side of five film previews. Someone even walks out during the adverts and I don’t see them return. So apologies to the Savoy, we’ll be back next time.

Juno MacGuff tells us ‘it all started with a chair’. This the chair that the sixteen year-old manoeuvred her best friend Paulie Bleeker (Michael Cera) on to. The chair where she had sex with him and ended up pregnant. To her credit she then refuses to become a victim of her circumstances and explores her options, although without seeking anyone else's advice. In the end, she bottles out of an abortion and instead finds adoptive parents in the local freebie ‘Penny Saver’ newspaper, which is a bit like ‘Loot’ I suppose. 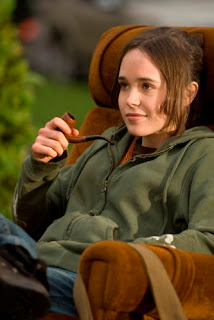 I'm afraid this really isn’t my sort of film at all and I don't really want to criticise it but it's been 'nominated' so I feel I ought to. I find the first half a real drag and what makes it worse is that everyone talks in a pretentious American teenage slang which is extremely annoying and that’s just the adults. The jokes aren't very funny and the ticking off of an ultrasound engineer is just embarrassing.

Juno herself is portrayed as a cocky, clued up individual. A pretty smart one at that, which makes it a bit unbelievable that she was stupid enough to get herself knocked up in the first place, particularly as it was her who planned the seduction. A broken condom excuse would have been more believable and a better message to send out.

From this point onwards everything actually goes swimmingly for Juno. Her parents are supportive, she doesn't get kicked out of school, it's hinted that her classmates shun her but they don't really seem to, and her boyfriend doesn't disappear over the horizon. That's despite the fact that she treats him like dirt, which he doesn’t deserve because he clearly adores her. She's a selfish girl who really needs a good hard slap to knock some sense into her.

Luckily the film does settle down and the second half is better. The film even manages to deliver some more natural humour and emotion. This is mainly due to the focus switching to the couple who decide to adopt her baby. The wife, Vanessa is the desperate for a baby type. The husband, Mark is clearly not, he's a typical bloke, and he'd rather be a rock star. Juno and Mark find common ground in music and splatter movies. Although for no explained reason she's into 70's punk while his era is more the 80's. All the same they have more in common that Mark and his wife do. It seems at one point that they were destined to get it on together, despite the twenty odd years between them, but the film ducked that potential issue, which was a shame. He does eventually leave his wife and I almost stand up and cheer, because Vanessa is awful. 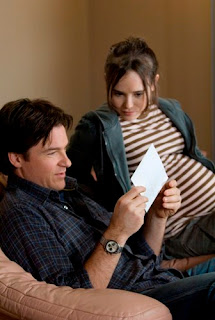 L says it was a nice romance but there wasn’t really any romance in it until the last ten minutes. Juno’s Dad, who is excellently played throughout, gives a good description of whom you should love and Juno decides that she does love her poor on-off boyfriend, who she's pretty much ignored throughout, after all. Her father should have told her this earlier, preferably right after he'd administered the previously mentioned 'good hard slap'. Had he done both early enough it might have saved her a lot of bother. 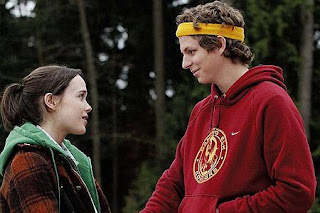 Now I think oh God she’s going to ruin it all and keep the blessed baby but thankfully she doesn’t. Juno and Paulie get all romantic while Vanessa goes it alone as a mother. So in the end, we end up more or less where we started with another single parent on the block.

It's an ok movie but nothing special and pretty lightweight. It's an ideal Sunday night sort of film. You just know everyone is going to live happily ever after and they do. Which for a film which raises a lot of ‘issues’ is odd but it just can't seem to be bothered to deal with them.

It's certainly not worthy of any awards. Please. Ellen Page is good in the role without being totally convincingly. The script is ok but is full of holes. Hardly in the same league as the Coen Brothers.
Posted by FitForNothing at Sunday, February 24, 2008