Dallas With Russians, Snow And Napoleon

I'm up early for a dog show this morning, we have a millimetre of snow on the drive but there isn't any anywhere else.

It doesn’t go terribly well, firstly we have a pole down in the absurd 'Time Gamblers' event where you have to guess your own finish time. Now what is the point of that? We miss the weaves in the agility and although Doggo is reassuringly quick in the 'Helter Skelter', he is too quick coming up my blind side and I send him in the wrong tunnel entrance.

Our best event is on the mega difficult jumping course. Having negotiated the tricky first part we are caught out by a horrendously difficult weave entry. Even so we finish 12th even with five faults and only just over a second behind the winner. Which basically means that had ‘we’ got the weaves right first time I reckon we would have won.

I hope I'm not being premature but Derby seem to be improving a touch. We've signed a new goalkeeper and a youngster called Alan Stubbs. Yes he is still alive; our club doctor says anyone with a slight pulse is a shoe-in for our defence, so he's in for his debut today. Consequently our defending is slightly less Maginot Line like, although we still let one goal in. This time though, the team come from behind to snatch a draw with our new Argentine striker’s first goal.

In the evening, and you don't get any more cultural that this, we do a bit of Tolstoy and go see War And Peace at the Playhouse. I say only a bit because the story is so long that it's in two parts. Part two is on Wednesday that is if I can survive part one.

L has been summarising the plot for me as she's been reading the book. Unfortunately her summaries make it sound a bit like an episode of Dallas but with Russians, snow and Napoleon.

First though we are a bit confused because when we sit down a chap with his knitting sits down on the stage, this is before the house lights even go down. Then a chap with a cycling jacket walks on stage, you expect to see a collie jump on stage and chase him to his bike. I feel that there's a possibility we’re in the wrong place but no, this is a modern start to the story. Soon other actors appear dressed in British Sea Power type trousers, we go back in time (oh no it's backwards) and then we're off... 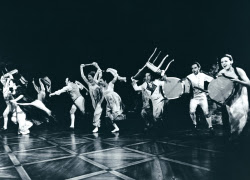 My simplistic view of the plot goes something like this. Although there is an American Football team sized cast, Pierre appears to be the main character. He is the illegitimate son of the wealthy Count Kiril who soon dies of a stroke. During the death scene, Pierre pays his last respects to a piano, although they may have just been reusing props and unexpectedly finds out that he gets all the inheritance. Which presumably pisses the rest of the family off.

Pierre is, I suppose, the early equivalent of a drongo student who has won the lottery; he certainly doesn't blend in very well with the rest of the upper class St Petersburg society. His claim to fame is that he once tied a bear cub back-to-back to a policeman and pushed them both into the river. It was one of my favourites bits of L's summary and I'm glad they left it in the play.

Pierre is then tricked into marriage by the shagaholic Helene and her family. Clearly after his money, she seduces him by sprawling Kylie like atop a piano and flashing her rather fetching 'over the knee' socks at him. How could a man resist and obviously he doesn't. L points out that it didn't quite happen like that in the book.

Helene is very free with it, that is with everyone but Pierre and he naturally gets a bit miffed about this. When one of her lovers, a chap called Dolokhov, raises a toast to 'pretty women and their lovers', Pierre challenges him to a duel and surprisingly wins, leaving him seriously wounded. So depressing is all this to Pierre that he joins the Freemasons.

Then there's the Rostovas and their vivacious young daughter, Natasha. She's kind of in love with a young soldier called Boris but as her husband baiting tactics appear to consist of spending the majority of the play in what looks like a nightdress, she could have anyone she wants. They also have a son, Nikolai who his mother wants to marry a rich girl but he wants to marry his cousin Sonya. She too is saving herself for him. Bless.

Then there's Andrei, who's bored of life with his pregnant wife Lise, so he leaves her with his miserable father and devoutly religious sister and buggers off to fight in the war. However at the Battle of Austerlitz Andrei nearly dies but is rescued by his hero, Napoleon but even this disillusions him. When he eventually returns home he finds his wife dying in childbirth, at which point he realises that she wasn't quite so bad after all. Total depressed by it all he disappears from life until Pierre talks him around. Then when he gets persuaded to dance with the young Natasha at her first ball, he's up and running again. Life, it is true, has more meaning when there's a youngster to get your leg over or so you would think until he announces his father doesn't approve and he going to disappear off for a year before marrying her.

To be continued, as they say. Oh and so far it's better than Dallas.

I'm almost on the wagon tonight with only a half of Burton Ale. I’m being good you see, race tomorrow. L has a whopping great glass of red wine. Although we both hit the coffees at interval.
Posted by FitForNothing at Saturday, February 02, 2008