The Oscars don't really show up any surprises. I can't argue with 'No Country For Old Men' for taking all the big prizes. Not that we've seen all the films nominated, some of them are still to come here. Also good to see 'The Counterfeiters' get best foreign language film. I suppose the surprise (to me) was Juno getting best original screenplay, which puts me off seeing some of the films it beat such as 'Michael Clayton' and 'The Savages'. Also that blessed rat got best animated feature film. 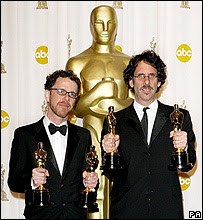 L's back on email today although she's not got any explanation for why this is suddenly the case. Computers do like to toy with us. She tells me she's been into town because she's read an article which recommended Sushi, yoghurt and fruit as brain food. She doesn't say whether that's all one dish or whether you eat them separately. She suggests the teenage habit of smothering them in tomato sauce as well. I think she's joking. I can barely eat tomato sauce these days, it's so sweet, it's like putting sugar on your food. When I was a teen, it was salad cream that did it for me, on almost everything. Understandably I can't stand the stuff now.

L doesn't say whether she feels any smarter after her brain food but assures me that there are no keyboard imprints on her forehead which means she's stayed awake all afternoon, which is something but I'm not sure that's the effect she was after.

I too venture into town at lunch as I have the car today, to try and get a haircut but I don't manage it because I couldn’t be bothered to queue. I don't do queues. It's bizarre because the reason I go where I go is because there's there’s never anyone in there. I will have to go back another day. So at the moment I still have long flowing locks just like Son.

Back home after work, I collect Doggo, then as usual drive back over to Derby for dog class, which goes well.

Once home again L tells me that she hasn't been accepted into Crufts for the Cani-cross, as we suspected she wouldn't. So back to trying to do it the hard way via agility. The people running the event are now refusing to refund the fully refundable entry fee. That's what they think...

Daughter is out with friends tonight and that's all I'm allowed to say about it. I’m not allowed to say what she’s been up to in case people think she's sad for going to see a film twice, so I won't mention it.
Posted by FitForNothing at Monday, February 25, 2008