At Last A Bit Of Training

In the car yet again today because I'm on puppy visiting duty this lunchtime. So my training has been absolutely stuffed this week but that's dogs for you, disrupting your routine; I didn't get my swim last night either because of taking Mini Doggo to the vets. So he already owes me a few good agility results.

I deal with the dogs in the morning as well because L has a 7am Cardio Tennis session. Unfortunately, it's raining so Doggo won't go out into the garden and Mini Doggo won't go anywhere that his hero won't.

Things are not much better when I go back to see the boys at lunchtime. Doggo is a bit grumpy towards the little one and still wouldn’t play ball, even though it had stopped raining. I kick his ball anyway but there's no interest from Doggo, Mini Doggo ran after it instead and kind of rolls over the top of it before falling on to his back. It's a good job that he seems to be quite a hardy little chap.

Some would say that it's bad news but it's really good news that a third cyclist has tested positive for the banned blood booster erythropoietin (EPO) in the Tour de France. It may look bad for the Tour but I'd be more worried if they weren't catching people because the problem cannot be eradicated overnight. It is also a vindication of the organiser's decision to use French drug testers rather than the Cycling authority's ones, who have been ineffective for years.

What's more worrying is that unlike the first two to fail, who were older riders, this time is was the Italian Riccardo Ricco who failed. He is only 24 and not just any rider; he's a top rider. He has already won two mountain stages of this year's race, was runner-up in the Giro d'Italia earlier this year and was sitting ninth in the overall standings. As a consequence, his entire Saunier Duval team decided to withdrawn from the race. All credit to them.

On the plus side, today's stage to Narbonne produced another win for Mark Cavendish, who made history by becoming the first Briton to win three stages of the same Tour de France. Cavendish is now looking well knackered though and also bruised from a fall the other day. He is likely to quit soon, probably after Friday's stage to concentrate on his preparations for the Olympics. 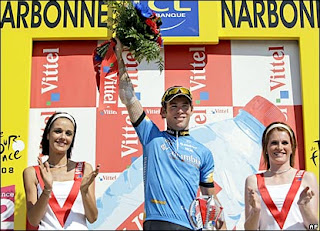 I think L's having a bad day, she's drinking coffee with caffeine and appears to be considering bludgeoning her boss to death with a pile of medical files.

I manage to fit in a run with Doggo on the park, so at last a bit of training. I had considered tucking Mini Doggo under my arm and taking him but he weighs a ton. Too much puppy food. L suggests I stick him in a rucksack and leave his head poking out the top. He'd love that but dog number one would be dead jealous.

Then I collect L from work and we go off to visit my Father, who is hopeful of getting out tomorrow.