Watching some chap getting his cleats adjusted whilst still travelling along at around 30kpm on last night's Tour de France highlights reminds me that I have some new ones of my own. I spend ten minutes this morning putting them on. They make all the difference, I can now release my feet without wrenching an ankle.

Biking is just so the right option this morning, some clever soul has overturned a car at the Wyvern Way junction and the A52 is horrendous and so are the side roads. I have to do a lot of weaving in and out of stationary traffic but it's better than being stuck in it in a metal box, although obviously I was missing my book. Asda Island is totally static, I've never seen it like that before. It's such a sense of power as I overtake them all. So a good trip, if I don’t mention my knees.

L's power-hobbled to work again, she says her legs are still awful. Which means they must be really bad if she's admitting to it. I think L's injury must be contagious because I’m having trouble sitting this morning; the ache in my knee appears to have moved up to my thigh. According to L it's not the sport that does it, more the sleeping curled around a collie. Hmmm, we best not get another one then or we'll end up sleeping on the floor, where the dogs are supposed to be.

I bike home; cut the lawn, which exercises Doggo at the same time, and then I cook some pasta. Quite a busy night and by 8pm, after L gets back from Pilates we're heading off to Rock City.

The first thing to note was that I was expecting a quiet intimate gig. I mean how popular can the ageing American's The Goo Goo Dolls be? Very, it seems. All the best vantage points are gone, the crowd preferring to go for these spots rather than try to get up close, as tends to happen with the younger crowd. They're all avoiding the moshpit I guess, like L. We stand at the back of the floor, where I fear L can't see very much.

We catch the end of London's Slaves to Gravity, who formed in 2006 from the ashes of The GaGas. They offer a reasonably decent grunge rock sound from what I can gather from the brief view of them we got.

I can't confess to being much of a Goo Goo Dolls fan, this is very much L's choice of gig. In fact, it's the most unprepared for a gig that I've been in a long time. They have produced eight albums since their inception in 1986 and I've only listened to one of them, 1998's 'Dizzy Up The Girl'. Which is a pretty good album in a pleasant, totally inoffensive sort of way. Thankfully they play at least six tracks from it tonight.

Actually it all starts rather well because I know three of the first four tracks. 'Slide' and 'Black Balloon', which is accompanied by a couple of... yes black balloons being released into the crowd, are both from 'Dizzy Up The Girl' while a track called 'Feel The Silence', from their most recent album 2006's 'Let Love In', I listened to on their website this morning.

Lead singer John Rzeznik reminds me a little of Brian Adams with his floppy haircut and worn in face whereas his slightly disconcerting sidekick, bass player Robby Takac reminds me of... and I don't wish to be unkind but... he looks a little like a cross between Meatloaf and Twisted Sister's little brother.

Takac takes vocals on four tracks, in two batches of two, including the excellent 'January Friend', yep that's also from 'Dizzy Up The Girl', and a nice little ditty called 'Slave Girl'. His deep gruff almost lost my voice style would have been good had it been a little louder and clearer or perhaps he was actually losing his voice. 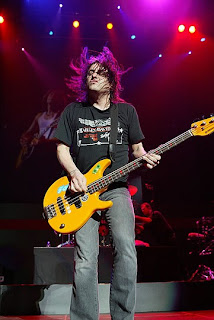 We have no problem hearing Rzeznik as he belts out song after song that everyone seems to know, except me of course, unless it's off 'Dizzy Up The Girl'.

The third member of the Goo's is Mike Malinin on drums but they haven't raised his drum kit off the ground and we can barely see him at the back of the stage. Perhaps that's how he likes it. I'm sure L can't see him at all.

The line up is completed by a second guitarist and a fifth musician who alternates between keyboards, guitar and later the saxophone.

Rzeznik banters well with the crowd and quips about Los Angeles being a dangerous gun-toting city. You get the feeling that he doesn't know how notorious Nottingham is. He seems to be genuinely pleased to be over here playing to appreciative UK audiences, as most US bands tend to be. I get the impression American audiences just pull up an armchair and read the paper while they watch their bands. 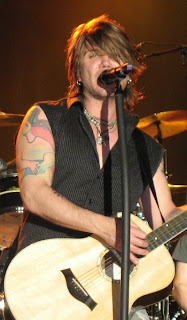 They wind things up with 'Let Love In', to which the chap in front of me in the 'Let Love In Tour 2006' t-shirt goes mental to, 'Better Days' and finally a big cheer goes up for 'Iris', which ends up being mostly sung by the audience.

They get shouted back for an encore and Rzeznik returns to the start to ask 'did you guys say fish and chips?'. These Americans struggle with our accents you know.

They treat us to their new single, 'Real', which has just been released ahead of a new album. A lot of the audience knew this one too. They finish with 'Broadway', that's Broadway, Buffalo, not Broadway, Los Angeles by the way.

I wouldn't say I'm a convert but it was still an excellent gig.