I run in this morning, assisted by Feeder and it goes really well, so perhaps my knee is recovering.

Carla Bruni's new album is dissected by the press and lines from her songs are quoted, because, they assume, they are all directed at her husband, the French President. Such as 'I give you my body, my soul and my chrysanthemum' which is an interesting way of putting things. Somehow, I can't see Gordon Brown's missus coming out with that sort of talk.

Another one in the news is James Cracknell because he is about to undertake a new challenge. This is to be the South Pole Race where teams compete against each other to be the first to complete the journey to the South Pole. He says he's picked this challenge because he wants to do something which doesn't involve sitting down. Ah, I see, the poor chap. I assume he must be suffering from the same injury as L. So she's in illustrious company.

In the evening, I walk into Derby and to the Derby Beer Festival. It's not bad but there's not a great selection of the dark stuff. I have three halves before L arrives on the bus, so I already feel a bit legless. She's not a big fan of beer festivals and as I feel I've almost covered it anyway we head to the Flowerpot instead, unfortunately there's nothing much on the dark side there either.

The only reason to stay at the Festival would perhaps have been to see all girl Yorkshire rock band the Almaboobies. Whom Derby Camra, oddly out of character, have booked for the Darwin Suite. 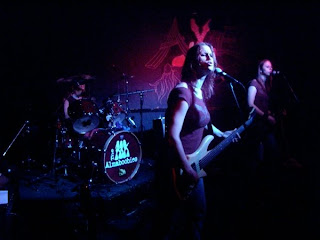 Later we head back to the Beer Festival for a nightcap because I thought the Fullers London Porter was worth a second taste but it's not as good second time around. We head off for the bus, which is naturally early, so we miss it.

We retreat to the Royal Standard to wait the half an hour until the next one and there it is, the beer I've needed all night, Jennings' Snecklifter. Better late than never.
Posted by FitForNothing at Friday, July 11, 2008