Dog show at Rugby today. It's a pretty big show and we only have two individual runs and one team run. My individual runs look like they're going to be very late on, so it could be a long day.

At least this lets me concentrate on the team event, which is qualifier for a place at Crufts 2009. There is talk of moving Doggo and I up to the A-team from our current berth in the B-team. Everybody, it seems, wants a piece of good old reliable Doggo and the expected clear round he will turn in. No pressure then.

In the end, we stay in the B-team, who are down to be the first of our two teams to run. The team event is a relay, which involves a baton change, from handler to handler not from dog to dog, which really would make it interesting. The team courses are usually relatively straightforward and it amazes me that so few teams can get four dogs round clear because clear, but slow rounds, have never been a problem for Doggo and I. A team qualifier usually only produces two or three teams that go clear.

We are down to run third in our team. I watch our first dog go clear, handled by one of my trainers. I don't see what our second dog does, handled by another of my trainers because I'm too busy setting Doggo up on the start line. We hand over the baton and off we go, I'm a bit worried about the weaves because if there's anything we might cock-up it's likely to be them but we don't. It's a good round, clear and actually quite fast. I hand over to dog four and I presume that from the deathly silence and collective held breath from the assembled crowd that number two dog was also clear.

Doggo and I watch the fourth dog go round, breath bated and then yes, they're clear too. Cue wild celebrations on the sidelines. We are the second team to have gone clear but we are a massive 14 seconds behind the leaders but it's still a terrific effort. Regrettably, only the winners get to go to Crufts.

When we find out who's leading, someone points out that they've already qualified from a previous heat. Therefore, this would mean that we get to go through instead. Cool. Only problem is there's about another 30 teams to run, including our A-team. So just a couple of hours anxious ring watching then. Most of the team can't bear to watch but I love the tension, this is what sport is all about.

It also gives me time to reflect on the fact that the Kennel Club is running a health awareness campaign to get more people to recognise the health and fitness benefits of taking part in agility. They want anyone who can tell them about any dramatic improvements they have noticed to their health as a result of agility to get in touch.

I fear they are barking up the wrong lamppost because generally agility people are not a very fit bunch, although the ones that do the best are. The fuel of choice for most agility competitors is supplied by the burger vans. In fact, as I watch the team ring, I see one competitor consume enough food to sustain a brown bear through its winter hibernation period.

It's an odd sensation watching the A-team, half hoping they cock it up but they duly oblige, 3 out of the 4 have faults. Glad they didn't move me up. I watch team after team get faults, finding it harder and harder not to cheer each time a pole goes down or a contact point is missed. Then finally, the waiting is over.

The talk before the event was about who was going to go up to the next qualifiers which involve long trips up to North Yorkshire and Teesside. Now neither trip will be necessary because we've done it, apparently, Doggo and I will be at Crufts next March. I hope that's right because I've told everyone now.

The rest of the day is a bit of an anticlimax and we don't get an individual run until 3.15, by which time Doggo has had enough. We go clear in jumping but we're well slow. The agility course, which we run at 5.00, is our sort of course but I really can't see Doggo managing the weaves where they've been placed if his concentration isn't totally spot on and right now, it certainly isn't. We do mess up the weaves, which is a shame because there aren't many clears and perhaps we could have got something.

I get home to find that L and Daughter have sneaked out to Mamma Mia without me; they just don't want me to assassinate it in my blog. Perhaps it's for the best; I wouldn't want to wake up in a cold sweat after singing Abba in my sleep.

In the Tour de France, amidst foul weather, Mark Cavendish becomes only the second British rider to win two stages in the same year, as he sprints to victory in stage eight to Toulouse. 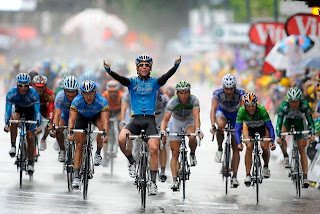 We have an AF night in; well I do, as I have my triathlon tomorrow. L casually mentions that she has printed off a list of puppies from the Derby Evening Telegraph. We go through the list and I, in a very rash moment, let L ring up about some 10-week-old tri-colour collie pups. Unfortunately, they still have one left. We're going up to see him tomorrow afternoon.
Posted by FitForNothing at Saturday, July 12, 2008