Today was going to be a chance to finally get back on my bike and get some miles in before Sunday but no, I'm in the car again because I've volunteered to collect my father from hospital over lunchtime. What with a new puppy and my father in hospital, it's not been a good week to have a triathlon coming up.

At least I started on a new book this morning, aurally of course, a John Grisham which is much better than chick lit and unlike the start of the last John Grisham I 'read', I’m actually following it.

At lunchtime, as planned, I drive the getaway car over to meet my father as he attempts to escape from hospital but on this occasion, he is thwarted by red tape. I seem to remember it took me all day to break out when I was in Queens Medical a few years ago. I tell him to start digging a tunnel and I vow to return later.

Worse thing was whilst I was waiting; I ended up getting moved into the main car park. Its ok they say, you get 15 minutes for free. 18 minutes later, I'm not happy and my pocket is £1.60 lighter.

I'd just about given up hope of him getting out in the afternoon either when suddenly at ten to five, I get a phone call. The great escape is back on. This time they do finally let him out.

After dropping him off at his place, I head off to the pool. I'm hoping to convince myself that I can still swim after my farcical efforts at last weeks Triathlon before this Sunday's encounter with the water.

After my swim, I head home to take over the dog-sitting duties from L, who goes off to the gym.

At the Tour de France, Mark Cavendish does it again; victory number four comes on stage thirteen in Nimes. 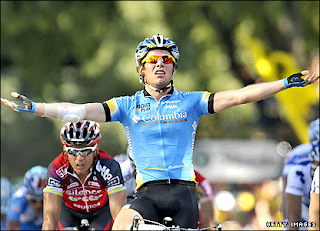 It's amazing what I pull out of Mini Doggo's basket. He seems to be very adept at making his own bed with place mats, tea towels and perhaps the odd pair of jeans or t-shirt. Very resourceful.

I leave Mini Doggo with his clothing collection and head off to meet L. Doggo probably needs his usual Friday pub night session more than we do, what with having to share his life with a family pet. We can’t take Mini Doggo with us until he’s fully jabbed, so that’s not an option. The pub is very pleasant apart from the usual scrap between Doggo and the pub dog.
Posted by FitForNothing at Friday, July 18, 2008