More About The Little Ankle Biter

I have to be up at 5am this morning to travel down to Maidstone with a colleague for work, so considering that I set the alarm for 5pm by mistake it's amazing that I made it.

Mini Doggo is already up and lively. He goes straight outside to do his business. We're very impressed; he seems to be amazingly toilet trained; no puddles at all yet.

He is also absolutely thrilled to see Doggo but the feeling doesn't appear to be reciprocated. Doggo is still not sure what to think of the new arrival and I still don't think he's realised yet that he's here to stay but surely Doggo will grow to like the hero worship.

Is nothing sacred? The famous Dunlop Bridge at Donington Park is to be demolished as part of improvements to bring the circuit up to F1 standards. The planned realignment of Coppice Corner would leave the iconic bridge in the middle of the track, so despite the fact it's been a feature of the track since it reopened in 1977, it supposedly has to go. Scandalous. 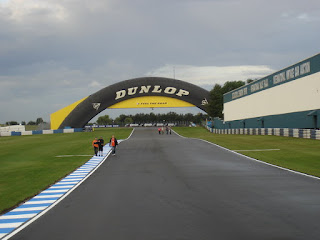 We hurtle back up the motorway and I get home just in time to visit my Dad who is recovering well after his operation.

Then its back home to L and her 'boys'. The little ankle biter still seems lively but L says she's even caught Son bonding with him, albeit briefly. Ha. I bet when we’re out, he sneaks down and to play with him. He’s a softie after all.

We finally wear Mini Doggo down, he keels over, I dump unceremoniously in his box and we slope off to bed.
Posted by FitForNothing at Tuesday, July 15, 2008