Its Saturday morning, 8am to be precise, and we are enjoying the idyllic surrounding of Pontefract Racecourse. The sound of the continuous rainfall on the car roof is punctuated by the chorus of dozens of dogs barking. Dressed in full waterproofs, I head out on to the wet grass. Doggo looks horrified that I might ask him to join me, for now he's safe and I don't. He gets his head back down in the boot of the car, presumably trying to dream himself somewhere else. I join the other hardy souls and assess the first courses of the day.

The rain eases enough for us to put in a 'skin of the teeth' performance on our first course and record 8th place. Not bad considering we made a few mistakes.

Next up is the team event. I am told that good old reliable Doggo has been upgraded from the B team to the A team, good news I suppose. Just as we're stood on the start line, it starts to rain again, heavily, great. We are third to run in our team of four but by then the scorer has already filled half his sheet with penalty points so we certainly aren't going to be among the prizes. Never mind, the reliable one puts in a clear round anyway and, as the fourth dog cocks up it too, we are the only ones to do so. Done our bit at least.

Next up, a jumping course for grades 4 and 5, to which we will no longer be invited to partake in come August when we officially go grade 6. The rain has again ceased or rather it had until I take off all my wet weather gear and stand on the start line, when the heavens open again, heavier than ever. To his immense credit, Doggo is coping well with the foul weather and on a tricky course we record our third clear round of the day so far. Then as we stand congratulating each other, the judge runs over to us. Perhaps he's going to praise us for the best round he's seen all day? I'm afraid not. He tells us our time was just over 10 seconds. Blimey Doggo you were fast, what's L been feeding you? Unfortunately, the reason for our storming time is that the rain has gotten into the timing and the clock had stopped half way around. We will have to re-run, although this will be for time only. This means that, as we've already been clear once, if we have any poles down second time they won't count them. We head off to dry off and will return later when hopefully the rain will have eased.

Half an hour later, we return. It’s not raining and despite the fact we don’t have to be clear, we still are. Professional to the last. The time, this time, is a more believable 28 seconds. The unbelievable bit is that it's only two tenths off first place but it's good enough for second. The dog's done good again.

The afternoon is an anticlimax. Doggo looks knackered, his night out catching up on him, and in any case our next run is spoilt by thunder, which puts him off. Our final run is spoilt by the weaves, of which I can see no other option than to do them on my right, which Doggo hates. Before we start, I discuss it at length with him but he still aborts the 12 poles at number 10, as is often his way. I'll forgive him today. One trophy is good enough.

We head home back down the motorway, just Doggo, me... and Sophie. Don't tell L but we have a woman in the car. It’s not actually Sophie but a woman pretending to be Sophie Kinsella and reading my new chick lit talking book to me. It’s not exactly fiction for oldies like me but it's much easier to concentrate on than John Le Carre.

We take our victory spoils home to L, who has something bubbling on the stove ready for us and we even manage a clandestine operation under cover of Doctor Who before we head into town.

L's been promising herself a cocktail, so we head to Cast for an eye wateringly expensive Vodka Martini, the real McCoy. I stick to trusty Leffe. Then we head up to towards the Ropewalk but first we call in the newly reopened Hand And Heart. A delightful pub that is built into sandstone caves but closed three years after falling into a very run down state. 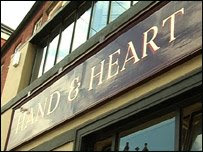 They've done a great job of renovating it and have five real ales on sale. The only downside to this is that they've gone out of their way to find the most common and dullest ones they can: - Directors, London Pride, Theakston's XB, Bombardier or was it Bass? but you get the idea. Not beers you'd cross the road for which is a shame because you'd definitely cross the road for the pub.

They do have Castle Rock Harvest Pale on as a guest, which is where I start but there's only so much of that brew that you can have. So I end up on Chimay's and Leffe's but we stay the night, forgoing the Ropewalk, to offer our support to their venture but the beers will have to improve or else it won't become a regular haunt of ours. Posted by FitForNothing at Saturday, July 05, 2008