On the bike again and I finally seem to be loosening up. There's also less traffic around, so the A52 must be open today.

L's been keeping me up to date of the soaps, namely her talking book 'South Riding'. The lay preacher who got some teenager up the duff has just got it on with his wife for the first time in 15 years, just because he promised her a maid and sang some hymns with her. He ripped her hairnet off and threw it in the fire. That's some seduction technique; I'm taking notes.

L promises Moroccan vegetable tajine and couscous tonight, which sounds wonderful. She's not clear whether this is before or after the hymn singing.

What's gone wrong with society? I refer, of course, to the state of cheese and onion rolls in this country. You can't get a decent one for lunch anywhere. The cheese is grated not chunked, mild and not mature and that goes for the onion too, too mild and too soft. No wonder society is in a mess.

It rains most of the afternoon, although it eases just before I start cycling home but then chucks it down when I get half way. It's still better than being in the car as the M1 motorway is shut, causing major tailbacks on all the surrounding roads. I swim through the rain to the pool, do my lengths and swim home.

I've decided to rest Doggo from class tonight, he's done a lot recently but then they cancel the class anyway due to the road chaos caused by the M1 closure. Instead, I take him on the park, while L power walks. She had planned a tennis game with Daughter but the council cancelled it for Health and Safety reasons, basically because it was raining. I manage to kick the ball without collapsing in pain, so my knee must be improving.

In Le Tour, Mark Cavendish claims his first stage victory and the first by a Briton for five years. Another Briton, David Millar is currently third overall, 12 seconds off the lead. 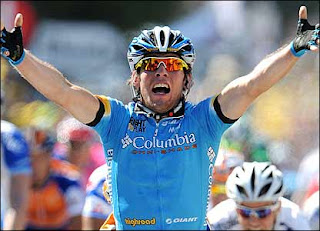 L can't get the veg for the tajine and she forgets the hairnet too, damn.
Posted by FitForNothing at Wednesday, July 09, 2008