I'm a bit hyped up by Cholera last night but unable to do anything about it because today is race day.

We drive to Lincoln for the 10k. As we get ready we walk Doggo around with us and he's naturally a pain. They have kindly given everyone a baggage label to put on anything that you would like to be taken to the finish. I'm tempted to put mine on Doggo.

When it comes to start time, I feel it might be of benefit to off load some weight but the queues are just too long so I reluctantly decide to carry it round with me. We go to line up at the start; I try and get in near the front. L moves further back.

They have issued yellow numbers to 300 'elite' runners who theoretically will do the distance in under 40 minutes if they're men or 45 if they're women. These people get a head start, it's only a few metres but it all counts. This I think is grossly unfair, mainly because I put my time down as 41. If I'd known that 40 was the cut off, I would have lied.

The start is delayed due to cars parked on the course, so I did have time to queue after all. My mind wanders, last nights 'Cholera' springs to mind again probably because something is wrong. There are women with chests lining up at front of the race and fast women don't have chests. You can also tell these women are not going to be fast runners because they're all stood there in circles chatting, not exactly focussing on the real job in hand and they all have slogans such as 'no overtaking' on their backs. Next time I'm having one saying 'no talking'.

These people are standing here, in the way of us 'almost' elite runners, because the start is badly positioned, such that the late arrivals, who are almost always the slower runners, have to push through the whole field to get to their start positions near the back. The alternative is for them not to bother and to stay down the front and start with the 'elite' and many have clearly chosen to do so.

When the gun finally goes for the start, they just stand there waiting for the back to come to them and everyone has to weave around them.

I get a good start and I'm soon clocking up four-minute kilometres which is 40 minutes race pace. I dare to dream but the truth is the pace is terrifying. I consider backing off but then spy a seriously 'overdressed' girl with an Ipod, who I had down as one who shouldn't have been at the front. She is actually in beating me, no chest though, should have known. She doesn't stay in front for long. Nor does an Ipod wearing chap in a woolly hat; I quickly make sure he's behind me too.

The fast pace lasts until the water stop at half way, where I'm 20 seconds down on the required pace. The drinks are in bottles so I grab one and have a drink. It makes me feel ill, so I throw the rest away. Surely any hope of a sub-40 has now gone but oddly I'm back on pace at 6km. No idea how that happened.

But by the 7km marker I'm 20 seconds down again, so they must have the markers in the wrong place! It's all gone pear shaped and I'm in so much pain I don't even see the 8km marker. By the time the 9km one totters in to sight, it's clearly all over bar the trip in the ambulance wearing an oxygen mask.

The last 2km appears to be all up hill and then just to put the boot in when you're feeling down, the last 500 metres is over cobbles. Great.

I stagger across the line; both my watch and their clock say 41.14. Terrible. We'll it's a PB actually but you know what I mean.

The PA system is telling everyone to keep moving through the finish but there's a conveniently placed patch of grass just past the finish line which is quickly filling up with bodies. I decide to join them while there's still room. I lay on the grass trying my best to have a civilised death along with the other idiots who have ran too fast, while a flock of St John Ambulance folk circle like a vultures around us.

Eventually the world stops spinning and as I don't fancy receiving mouth to mouth from any of the St Johns crowd I decide to get up and stagger back to the finish to wait for L.

I get there just in time to see an elephant, or was it a hippo, or it might have been a rhino, it was hard to tell, run behind the commentary caravan to die. As he was in sight of the finish line, it's an odd choice but perhaps he didn't fancy his chances with the St Johns either. A few minutes later they are bringing him in bit-by-bit, first the head then some furry feet. I never did get to see who or what was inside the suit.

L comes in a little quicker than her time on Monday but I know she's just not going to be happy. She's almost as bad as me! I leave her to join the massive queue for t-shirts while I stagger back to the car to release Doggo. Due to the finish being in a different place to the start, it's a very long walk back to the car.

The official results actually give me a slightly slower time, which is criminal, but my personal 'chip' time is about ten seconds faster which ain't bad I suppose, although I don't believe it took me ten seconds to cross the line. I finish well inside the top 200 out of 3307. Ok so that's quite good. So where's my yellow number then? However I must do some training before the next one in Derby in three weeks.

As always I offer to take L out post-race and she promises to not go all morose on me, as long as we don't go out for a curry. L says she needs Yorkshire Pudding and gravy, so we go for a late Sunday Lunch instead and several 5.0% Bishops Fingers before returning home on aching legs for a rather painful but necessary warm down.

In the cycling there are no golds today, I suppose nine is enough really. Victoria Pendleton goes all the way to the final of the Keirin but comes up short this time and only gets the silver. Mind you the girl still done good. I had my doubts about her motivation this year because she's been spending a lot of time going 'all the way' for the camera's, by getting her kit off, and posing naked. I'm not sure that is a very professional thing to do.

Would it be unprofessional of me to print that photo? Oh go on then... 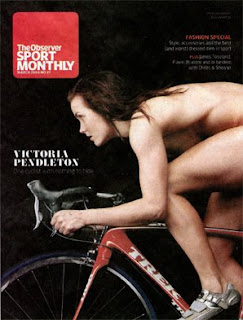 Hopefully people will aspire to get astride a Trek bike like hers, rather than just be jealous of the bike.

The BBC have to their credit covered the championships quite extensively and put the cycling on their main channels every day. Their coverage has been decent, so I hesitate to criticise but... do we really have to have so much talking? It's just boring. Also why do they have to record everything rather than screen it live. I tuned in early yesterday to catch their interactive service because the naked one's Sprint Semi was at 12.30 but the service wasn't running. Instead BBC1 went live at 13.00. After one of those annoying recaps, we finally got to the track where the presenter, Jill Douglas, is talking to GB team member Jamie Staff discussing Victoria Pendleton's 'imminent' Sprint Semi-final when you can see behind them on the track is our Victoria doing a lap of honour. Jamie appears to be looking past Jill trying to watch what's happening on the track. So then when they eventually show us the races we already know that VP wins! You can't have everything I suppose.