Too Weird For Words

I get up a 6am because Doggo and I are off to an Easter agility show at Scunthorpe. Only we aren’t because when I look on the internet, I find that it's has been called off due to a mix of high winds and snow. Shame. Sounds quite exciting to me. We might have stood a chance in such 'challenging' conditions. 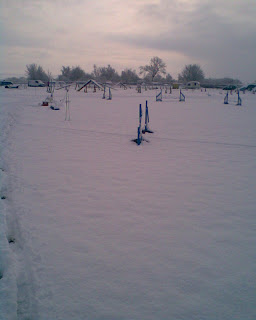 The advantage of our event being off is that we can now go and support L who has booked a 10k race on Wollaton Park today. I'm not sure how to break the news to her because I think the reason she entered it is because we had our own an event and therefore wouldn’t be able to go watch her. Although another reason may be that she says the finishers get an Easter egg and she was planning to keep it all to herself.

Slipping back into bed, I know that I’ll have to behave myself because pre-race frivolity is not allowed when I’m competing and certainly not when she is. To my surprise though this isn’t the case today and it's a pleasure to be coerced.

Before the race starts I take Doggo for a 'session', just to take the edges off his ‘supporting’. It appears that I’m not the only one just supporting; the girl with the unnecessary ponytail stands next to me in the crowd. She doesn’t spit at me or me at her. We're very civilised, although I think this is because she doesn't recognise me. She doesn't have me on her hit list, like I do her. Most of my other adversaries seem to be absent, although I do spot a chap from Mansfield Tri in the race who I’ve had the odd tussle with.

They all get a mug at the end and L's expecting the Easter egg to be inside it but the earlier finishers do not appear to be munching on anything and when she finishes, L confirms there is no egg. How deflating.

Meanwhile Doggo has developed a limp. I'm not sure if this is because he doesn't realise that the agility show is off and he's limping to try and get out of it or whether it's a result of him spending two and a half hours on the park.

When we get him home he's clearly totally creased, so we don't feel guilty about going to the cinema. We were going to see 'Love In The Time Of Cholera' but L hasn't finished the book yet, so we kind of randomly select 'Lars And The Real Girl' instead. Daughter wasn't going to come, then she was, then she wasn't, then she Googles it, finds out it's about a sex doll and suddenly she is.

We have a very nice Irish beer 4.6% in the bar, which is naughty on a Monday then we watch the film.

The film is set in a small snowy, presumably Canadian, town and stars a chap called Lars who is a bit of an introvert. Despite having a job in an office, he lives mainly the life of a recluse in the modified garage of his deceased parents' home where his brother Gus and his pregnant wife, Karin live. They both want Lars to be more sociable and keep trying to get him to come to dinner with them.

Lars though, struggles with social interaction and is troubled by his past, in particular the loss of his parents. Lars doesn't want to be involved with people and is even too frightened to act upon the advances of a female work colleague.

Then suddenly to the surprise of Gus and Karin he announces that he has a girlfriend. She's an orphaned registered nurse come missionary from Brazil or something like that. She's called Bianca and she's confined to a wheelchair. They are delighted until they found out that Bianca is a plastic sex doll, an anatomically correct one at that.

From this point onwards it would have been very easy to travel down the tired old slapstick comedy path but the film doesn't. In fact to our surprise the film is not a comedy at all, there is subtle humour in it but the film doesn't try to be funny. In fact at times it becomes inappropriate to even think of laughing.

Sex with the doll isn't on the cards either, in fact Lars asks his brother if Bianca can sleep in their spare room until they get to know each other better. 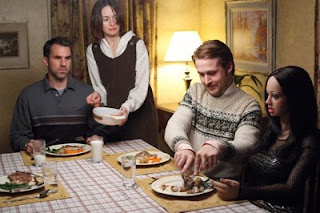 Instead of being funny the film becomes thought-provoking and moving. Gus and Karin take Lars to the local psychologist who suggests that they go along with his delusion until Lars himself deals with whatever is causing it. Then the film gets even more surreal as the whole town play along and Lars's new girlfriend gets taken to parties, to church, gets a job, and even gets elected to the school board. Through all this Lars grows in confidence as if this was his way of developing social skills. As his self-belief grows Bianca loses her appeal to him. Through all this, the girl at work, still despite the fact that Lars has been going out with a sex toy in preference to her, is still interested in him. So when Bianca goes on a girl's night, Lars is a little put out and accepts a date with her.

After their night out bowling with some other friends, Lars comes home to discover that Bianca is dying. Bizarrely an ambulance arrives to transport her to hospital. It gets even freakier after she dies because a funeral is held for her.

Bianca dies because her job is done, the local community have helped Lars's heal his psychological problems, and through Bianca he has discovered how to deal with human situations. 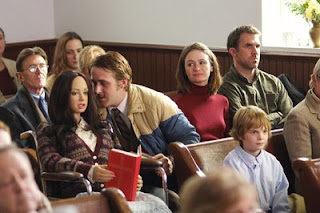 It's a highly original film that at times is too weird for words. Despite that, or perhaps because of that, it's excellent with outstanding acting performances all round. It did plod a bit in the middle and Bianca took an age to 'die' but it was still a great film.

If L was reviewing it she would dwell more on the psychological side of it, but I feel it's more of a film about someone failing to develop their social skills. There is even a dig about one of the office workers being unable to afford his own doll because he spent the money on an Xbox. Sure the film is far fetched but a lot of people have imaginary friends and 'friendships' with dolls and teddy bears when they are younger. This film just takes this all to the extremes. Lars just took a little longer growing up but he got there in the end.
Posted by FitForNothing at Monday, March 24, 2008