As the Piccadilly Circus, that is everyone getting up for their paper rounds, subsides we enjoy our lie-in. Then L heads to Sainsbury's and I run Doggo across the University campus and down the canal to meet up with her. So at last I get a training run in. Yes I know it's a bit late, the race is tomorrow. I take it steady and bizarrely Doggo has to wait for me occasionally.

In the papers, the press seem to be slowly waking up to the fact that something rather special is going on in Manchester. The cycling makes the back page and inside there are two pages including a full-page photo of Rebecca Romero. 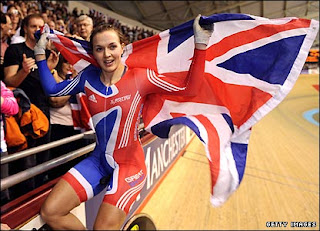 Chris Hoy wins the Keirin and then amazingly Bradley Wiggins and Mark Cavendish come from 5th place late in the madness of the Madison, steal a lap on the field, and win the thing. So that's nine gold medals now. 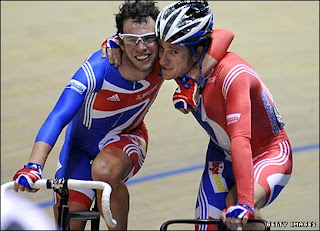 I'm at Pride Park in the afternoon where Derby will be relegated today if results go against them. We're playing Fulham, so it's the bottom two slugging it out, someone wake me up when it's all over. Funnily enough it turns out to be one of the few good games we've seen this season. Two battling 'Championship' teams going at each other. Derby take the lead but I have the feeling they've left the great escape too late. Err yes. A 2-2 draw ensues, which means with Birmingham winning, the coffin lid can finally be nailed down.

L does pasta to carbo load us up for tomorrow and then we head off to Broadway for a spot of romantic Cholera. 'Love in the Time Of Cholera' that is. After a fierce moral dilemma about whether it's better to be AF pre-race or not, I take a Nottingham Dreadnaught into the film.

Set in Colombia, the film opens with a man falling to his death after trying to retrieve a parrot from a tree. In the next scene, an old man is laying in bed with a girl over fifty years his junior (nice work if you can get it). The ringing of the church bells, signifying a funeral, alerts him and strangely he casts aside the young girl, impressive chest and all. The first of many chests up for comparison tonight.

The old man is Florentino Ariza and straight after the funeral, he approaches the widow Fermina Daza, ignoring her distress at her husband's death and declares his everlasting love for her. Enraged by the gall of the man, she understandably tells him where to get off. Apparently, he made the same vow many years before and so the film takes us back fifty years in time and tells us his story.

When they were young, Florentino was a mere telegraph boy, who was besotted with Fermina from the first time he saw her. He is persistent, constantly pursuing her, writing her letters and they have a short romance. Her father tries to keep them apart and one day she rejects him totally. Then when she goes down with suspected Cholera a doctor is called. The doctor is Juvenal Urbino, the man who falls out of the tree. He immediately gets one up on Florentino when he cunningly persuades her to get her chest out in the interests of a very thorough examination. Ha, writing letters doesn't get you that far does it! He deduces it isn’t Cholera and so she lives. Her father is so gratified that he asks the doctor what he can do to repay him. I expected Dr Urbino, obviously impressed with what she’d shown him, to demand his Daughter there and then but he is more subtle, with the help of her father he gradually wins her over, and marries her.

Florentino (now played by Javier Bardem and looking like No Country For Old Men meets Bleak House) is distraught but remains obsessed with her. He vows he will stay a virgin until they are together again. 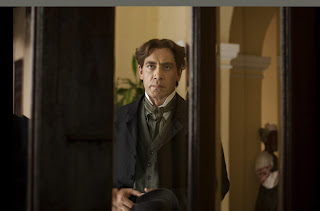 His boss takes him to the whorehouse to take his mind off things but he's not interested. His chastity though, only lasts until he bizarrely gets jumped by a mystery woman on a boat trip. Some you win, some you lose, I guess.

With his vow in tatters perhaps it's time to move on, eh Florentino? They say the best way to get over heartache is to channel your energies into something new and he certainly does that. He drowns his sorrows in the arms and amongst other limbs of many women, which adds a whole new dimension to being ‘on the rebound’.

He proceeds to have his way with anything that moves, if it's female, it doesn't matter if she's available or not. In fact after seducing one particular married woman, he scrawled a declaration of his ownership on her body and when she forgot to wash if off before she cuddled up with her husband that night, her enraged husband killed her. Slight over reaction perhaps but I imagine he was a tad pissed off.

He also keeps notes and records each of his conquests in detail, probably giving marks out of ten for each one. Just think what he could have done had they had Excel in them days. He could have done graphs and all sorts of fancy things.

If all this is meant to help him get over the pain of losing Fermina, it doesn't work. Apparently absence really does seem to make the heart grow fonder in his case, even if other parts of him have long since got over it and moved on to pastures new, and then moved on again... and again... By the time her husband dies and she is up for grabs again, 51 years, 9 months and 4 days have passed and Florentino is in the arms of his 622nd conquest when the funeral bells ring. Although it's a bit unbelievable that an old man can still pull so many much young women but I suppose it happens, just not to most of us. 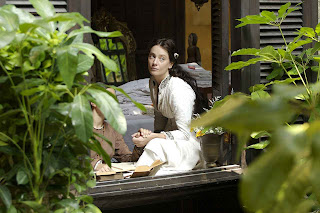 In the end they do get together and he finally gets to bed the woman he was saving himself for. He assures her that he's 'remained a virgin' for her. He’s a card. Not that she believes him.

The film was a brave attempt to turn what I imagine is a complex book into a film and it's far from perfect but I enjoyed it. Although you didn't really get any emotional attachment with the main characters but perhaps that was the idea.

The biggest let down was by the make up department. The characters had to age by 50 years and it's done badly. Fermina at 70 just looked like a 30 year old who'd had too many vodka's, that is until she unveiled her chest for him, which is by now around her knees. It wasn't there when she showed it Dr Urbino all those years ago. I hate to think how they achieved that effect, perhaps they got a stunt double in. Oddly, only one actress is chosen to play Fermina throughout her life while two actors share the role of Florentino. Perhaps they went over budget.

The film ends with them on a river cruise and the Captain of the ship raising the flag of cholera, so that they won't have to call at any ports.

Suppose it's not a bad gig, working your way through 622 women and still getting the girl of your dreams.

Home for a carbo top up courtesy of a pudding that L has knocked up, served with not only custard but ice cream too. Just don’t tell Daughter about the ice cream but then again she's not running a 10k tomorrow.
Posted by FitForNothing at Saturday, March 29, 2008