The ‘Gentle’ Pace Of Things

Back to normal today with a restful day; a lie-in followed by a reintroduction to the park for Doggo. This being back home business is all a bit too much for him, he seems to be struggling with the ‘gentle’ pace of things and the last thing he needed was to be taunted by the self-exercising whippet. He spends the rest of the day sleeping it off.

L does an excellent Sunday lunch, after which I catch up one of last years films ’This Is England’ on DVD, directed by Nottingham’s Shane Meadows. It was shot partially in St Anns although the film is based in a fictional seaside resort. Again Meadows chooses a cast of relative unknowns and the whole film is similar in feel to his previous 'Room for Romeo Brass'.

Meadows says it is partly autobiographical of him growing up. The story is based in 1983 and backed by news footage of the period. The film tells the tale of 12-year-old Shaun, a boy who is constantly picked on at school. He lives with just his mum because his dad was killed in the Falklands War.

One day he makes friends with an older chap called Woody and his group of skinhead friends, who turn out to be a friendly bunch. They take him under their wing; he shaves his hair, gets a pair of Doc Martins and starts to dress like them. He finds himself accepted for the first time in his life. He gets to go to parties with them and even gets a girlfriend of sorts.

Then the mood changes when a militant racist called Combo is released from prison. In contrast Woody's group were not political or racist even one of them was black. Suddenly Shaun is face to face with violence and racism. It all turns rather nasty.

An excellent film. Quite a complicated tale, bleak but also occasionally funny and British made of course. 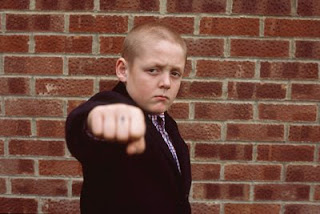