I'm on the bus, tapering again. I've got so many events coming up I seem to be permanently tapering at the moment, don’t know when I’m going to fit any training in. I've not managed to do any run training for the 10k on Sunday at all.

I pick up the newspaper, naturally not expecting to see a headline about the cycling 'gold rush' adorning the back page and I'm right. Instead the top sporting story is that John Terry may or may not get another chance to be England captain. Yawn, a non-story if ever there was one. There is a couple of lines about Rebecca Romero at the very top, referring you to page 91 of 104, so only 14 pages from the back. Things are looking up. I thumb past two pages of Beckham (remember him?), one of Rooney (the England match was two whole days ago!), several others of football gossip (yawn), a page about Shane Warne's retirement, quite a bit about diving (interesting but Tom Daley's medal was last week), a whole page about the former Wimbledon football club who are in the Johnson's Paint Trophy final..., two pages including a full page photo of Maria Sharapova and then we're there. Half a page and one photo. Cool. Britain's a country where were so proud of our non-achievements but we hide our successes on page 91.

It's very quiet on the bus today and I'm totally out gossiped by L. She says tells me about a glamorous Hispanic looking girl who started at the gym this morning and promptly disappeared under a pile of eager males. Then she told me about being pulled by some an Astrologer on Ilkeston Road. He was a talented chap who's was also a budding chef, looking for a partner to set up a restaurant with, and who also builds computers in his spare time. He wanted her to accompany him to the High School (we know his game). He asked L what her star sign was because there's only four star signs that he's missing among the women he's 'devoured'. Nice turn of phrase! I've always described Ilkeston Road as a cultural experience.

The emails from L get even more bizarre, at one stage she is comparing Doggo's deafness with my Father's. Then when I explain I've been having a strained conversation with that very person she asks me if it was about homework? We're getting our wires crossed here because L is under the heavy artillery fire from Daughter@ourhome.co.uk. Then it stops because she's on her way to escort L to lunch, although L has refused her permission to borrow some of her clothes. Oh Dear. Her wardrobe is L's wardrobe, I fear it could cause a stir when she turns up naked.

Cycling Weekly are in Manchester covering the Worlds via regular updates via their website. They have been moaning about a third day in a row surviving on supermarket sandwiches. Ah that be Asda then.

Results today, Victoria Pendleton qualifies fastest for the women's sprint and eases through to the semi-finals. Cycling Weekly describes her first round victory as so comprehensive it made her Russia opponent look like she was riding a heavy shopping bike with the basket loaded down with groceries. Hang on a sec, I think I've seen her in Risley; she's not that slow as I recall...

In the first ever World Championship team pursuit for women, Great Britain have to go first because they've never raced before, choosing not to take part in the World Cups and practice in secret instead. They promptly set a new world's best time on the way to the final and subsequently the gold medal. Gold number five. 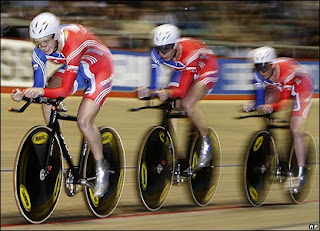 Then Chris Hoy follows up his victory over Theo Bos by going all the way and winning the men's sprint, our first in this event since Reg Harris in 1954. Gold number six. 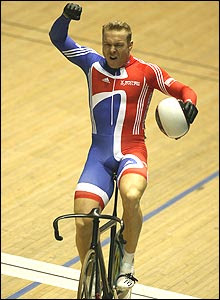 Free travel on the Red Arrow again tonight for no obvious reason. This is becoming a habit and I'm not even over 65, well not officially.

We are at Nottingham Playhouse tonight to see an adaptation of Malorie Blackman’s best selling novel 'Noughts & Crosses' by the Royal Shakespeare Company.

They say it was inspired by 'Romeo and Juliet' and I can see that, although L isn't convinced. Like 'Romeo and Juliet', it is the tale of two young people kept apart because they are from different backgrounds and like R&J it also ends in death. There's also a heady mix of other stuff in there, a touch of South African apartheid, a touch of Northern Ireland, a touch too of 'To Kill a Mockingbird'. 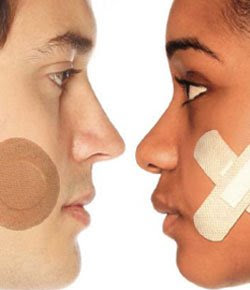 The story is set in a place where the people with black skin, known as the Crosses, are very much in the ascendancy over the white people, known as the Noughts.

Persephone (Sephy) is the deputy Prime Minister's daughter and a Cross. Her friend Callum is a Nought and is from the other side of the tracks and the other side of the racial divide, consequently their relationship is frowned upon by all sides. Racism and prejudice is destined to keep them apart.

In a half-hearted attempt at equality, Sephy's exclusive Crosses' school is opened up to three privileged Noughts, one of which is Callum. Sephy is delighted but the rest of the school are not and are very hostile to the three Noughts. None of them last long at the school but Callum lasts the longest until he is expelled, a situation caused by a string of events.

First Callum's sister, traumatised by previous bigotry, commits suicide causing Callum's elder brother, Jude, and his father to join the Liberation Militia, fighting against the Government. They are then implicated in the bombing of a shopping centre and Callum's father is sentenced to hang. He is saved by the secretive aid of a lawyer Sephy's alcohol soaked mother hired, Callum's mother used to work for her and there is guilt here to be eased. He is spared hanging but is killed when he tries to escape jail.

On the verge of being sent away to boarding school, Sephy writes a letter to Callum asking him to come rescue her, so that they can run away together but he doesn't get it in time.

A few years later she returns from boarding school and Callum asks to meet her but it's a trap, Callum is now working for the Liberation Militia and they kidnap her. At first Callum is harsh with her but they end up making love, although it's a kind of cyber-sex, performed verbally. Then Callum lets her escape.

Sephy falls pregnant and Callum is accused of raping her. Sephy denies it but nobody listens and Callum is to be hanged. Sephy's father tells her that if she has an abortion he will spare Callum's life. On a point of principle, Sephy refuses and Callum swings from the gallows to the sound of them exchanging vows of love.

A very fast moving exciting play, with never a dull moment. There's an awful lot of death in it and no happy ending, so it's right up my street. Totally excellent. I could demean the powerful message by some flippant boy-girl observations but I won't.

We find out on the way in that the girl who has been getting critical acclaim for her role as Sephy is ill and will not appear. This makes the excellent performance by her stand-in all the more remarkable.

We are back quite early from the play and as L's been a bit worried that her alcohol consumption is going to be low at this weekend, so we walk Doggo down the local for a few beers to put that right.
Posted by FitForNothing at Friday, March 28, 2008