Looking For... A New Life

After exercising L, exercising Doggo and replenishing our meat stocks with a trip to the farm shop, I travel over to Derby for the match. We are treated to the dullest of the dull, a match even Billy Davies may not have been proud of. Two teams seemingly playing for 0-0 right from the start. It ends... err... 0-0. Paul Jewell dares Match Of The Day to show the highlights.

The evening is a lot more exciting and we go see the play of 'Looking For JJ' at the Lakeside Arts. This is adapted from Anne Cassidy's novel, a book which was basically aimed at teenagers.

The play opens in a very modern style. The walls of the clever set being used to project the Myspace site of Alice Tully. Alice lives with a foster parent, works in a coffee shop and is preparing to start university. She is also thrilled to get 'pulled' by a chap called Frankie. All pretty normal stuff, except there is a lot more to Alice than this.

Alice hasn't always been Alice and through flashback (oh no its backwards), she talks directly to the audience and tells us her story. She tells us of her turbulent childhood with her generally absent mother, when she was JJ, Jennifer Jones. She takes us back to the pivotal moment of her life, when she was 10 years old. Her mother's is a fading fashion model, her career floundering with her age and desperately she takes on any available work that she can. This, through the odious photographer, Mr Cottis, leads her into a downwards spiral towards pornography and beyond. JJ feels neglected and is desperate for affection from her mother but her mother has less and less time for her. Instead she finds solace with two neighbouring children. 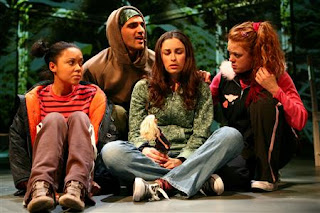 The photographer wants JJ to put on her school uniform and pose for him too but on the day her mother arranges this, JJ goes out to play with her friends and after an argument, in a moment of madness she kills one of them.

Now after spending six years locked up, she is trying to start a new life with a new identity as Alice. Unfortunately, as is the case these days, news of her release gets out and the press demand further justice, wanting her to continue to pay for her crime. She is pursued by a journalist who exposes her and her new life is destroyed. So she has to tell her boyfriend the truth and leave him, disappointing because he was one of those rare chaps who didn't jump her on a first date. She also has to move on from her foster parent and start again at another university, with another identity. It seems she'll always be on the run. The play ends with a chance meeting with the friend she didn't kill. Something I'm assured didn't happen in the book.

The play is certainly thoroughly provoking, as well as engaging and gripping. It's also brief at 90 minutes with no interval. This is good because we can’t afford to pay the interval drink prices at Lakeside. The play though could have been longer; I think they could have developed her later life more and explained how she managed to escape the press. Also there was possibly too much dwelling on the murder, you knew it was going to happen but it took an age to arrive, loosing the play some momentum. Overall though this was an excellent production, which is shown by the fact that I wanted more length to it.

The play raises lots of questions about whether a child, who has clearly been well rehabilitated and has now grown into an intelligent woman, should be allowed to put behind her the huge mistake she made earlier in her life or should she continue to be punished forever for something she did when she was only ten. Alice/JJ is a glowing example of what rehabilitation can do. After all what is the point of having prison, if it's not for people to learn from their mistakes or should society keep her locked up and, as the play puts it, destroy two lives instead of one. Throughout the play, I imagine most if not all of the audience were rooting for her, wanting things to work out for her. I was. 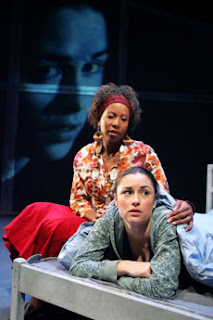 I have heard it suggested that the play was too harrowing for children, despite being a children's book but I don't think that is the case at all. This view was touted by the Daily Mail, which funnily enough is the paper chosen to carry the fictional press coverage of this case. What an uncanny coincidence. 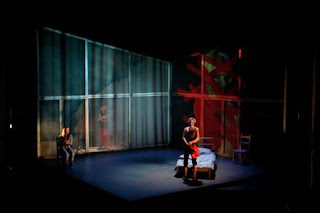 The set design is excellent, consisting of two sliding screens joined at right angles. The screens are used for projecting visuals but because they are also transparent, they allow the characters to speak to JJ through them, as if they are voices in her mind, a tactic which works well.

Christina Baily is excellent as JJ but credit should also go to the supporting cast, many who play multiple roles. L says she likes Christina’s outfit, a simple top, and jeans. Yep, there’s no doubt she looks good and she's got a great rear too.