Off To The Dog's Home?

L goes out early for a walk with Doggo. Warning him that if he pulls, it's off to the dog's home for him and the ultimate humiliation of replacement by a highland terrier. He obviously thinks she's bluffing because he appears to take no notice.

Things can't have gone that badly thought because when L texts from the gym to wish me good morning and check I'm alive. Something strikes me as very odd, there's no 'not' after her 'good morning' greeting.

On the way in on my bike, I notice that they are altering the steps on the pedestrian bridge over the A52. They seem to have covered them in those aluminium tiles covered in grit, you know, the kind they use for cheap roofing. The only difference is these have been painted yellow. I assume this because someone must have tripped over one and is suing them. They look really crap. You would have thought a better idea would be to take the steps out completely and make it into a ramp. That would make sense, what with the disability act and also the fact that about half the people who use that bridge are cyclists who have to dismount. Silly me, just realised what I said, 'sense', ha.

The World Track Cycling Championships start in Manchester today and the papers are going into a media frenzy because Great Britain are defending nine gold medals, which must be a very unique situation in UK sport. Naturally I'm joking about the media frenzy.

I risk going home the Ilkeston route again but keep a very wide eye open for boy racers. No problems tonight. I cycle to the pool and do a short 15-minute session before rushing home to catch the cycling which incredibly it actually on BBC2. Although it's notoriously difficult to get permission to watch my own TV in our house and so it proves.

It's a good call because he's brilliant and fast. So the technique is, give him a fortnight off and abandon him completely for a week of that and he'll be raring to go. Not sure he'd let me dump him again though.

In the cycling, Bradley Wiggins defends his crown and wins gold in the 4,000m individual pursuit and the men's team sprint win silver for the second year in a row behind reigning champions France. Tomorrow L and I will be in Manchester to see it all first hand for ourselves. 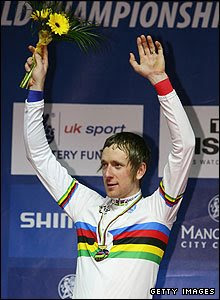 Posted by FitForNothing at Wednesday, March 26, 2008