The Weather Bites Back

We arrive back from Austria today, after an 'interesting' holiday. Interesting because it started snowing on the Sunday and barely stopped all week. In all the years I've been skiing; I've possibly never had quite so much snow. Especially in 'usually' sunny March.

The first day sets the tone. We knew St. Anton would be full of weekend skiers, so we tried to drive over to Lech where we reckoned it would be quieter but the snow covered roads beat us back. We ended up a Rendl where the conditions were too much for Son and eventually for Daughter who both go hide in the car. Not a promising start. I fear they have been spoilt by too much late season skiing, when the weather is at its best, like err... over Easter. This year the weather has really bitten back. The sun does come out mid afternoon and Daughter briefly emerges, does a bit of skiing and makes a few 'angels' (don't ask) but not Son.

Monday brings more snow and poor visibility, so we buy Son some goggles to help him tough out the conditions. Basically investing more money to try and get value out of the £140 we've already spent on his lift pass. He fares better and lasts until about 2.30. L and I ski all day and wind down in one of the bars with a Jagertee. By Tuesday we're sharing three between us and by Wednesday we're on two each... Thursday could be interesting.

Wednesday was actually the best day and not really a double Jagertee day. The sun was out but then so were the queues. Despite that we manage to ski the full length of the ski area to Stuben and back. The only day it was possible. The antiquated lifts over at Stuben were a shock after the modern system in St Anton, which is much improved since I last visited in 1995. Daughter almost treats me to an extra ride on the last chairlift of the day by discarding a ski, accidentally I think. I feared I would have to ski down and retrieve it but thankfully someone brings it up for us.

Generally a few hours before the end of each day the seemingly grossly unfit Son ends up in the car but not before decking a few other skiers which seems to have become his speciality this year. At which point, L and sometimes Daughter cruise the blues down to St. Anton while I go up and dabble on the black. This usually involves sharing the cable car with a fellow single skier, exchanging a nodded greeting with him as we get on then sharing a brief knowing smile as we both get off and head towards the black run. It’s just so like being a cyclist.

We finally make Lech on Thursday, despite more fresh snow, and ski the full ‘white ring’ circuit. L performs a routine that will surely be the winner of the 'fall of the holiday' award by bouncing off a snow bank. I've had some pretty interesting 'moments' myself on my late runs down the black to St. Anton but they haven't been witnessed so regrettably don't count.

As we take lunch in a posh restaurant above Lech, the only kind there is in Lech, the sun comes out but by the time lunch is over the mountain is once more shrouded by thick cloud. Problem today is we daren’t hit the daily Jagertee's because we have a treacherous drive back home to the apartment.

It was also the plan to avoid the queues by going there on Good Friday but we wake up to find the car buried under yet more overnight snow. Son gets up, takes one look at the weather, and asks ‘We’re not going skiing in that are we?’ In what? Snow? What else would you go skiing in? We leave him at home. 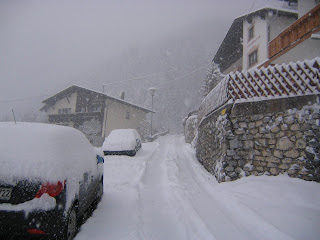 Even if we'd uncovered the car, the prospect of driving down the steep road from our apartment is frankly too terrifying to contemplate so we take the ski bus. Unfortunately the road is also too treacherous to walk down as I quickly find out. Disappointingly I don't think this is going to count as a contender for 'fall of the holiday' either as I didn't have my skis on. In the end we do put our skis on and ski down the road.

After a day dealing with the almost impossibly deep snow, we come to get the bus back and end up waiting for ages. Then we discover why none of them are turning up, the road to our village has been closed due to avalanche risk. When one does eventually show up, it takes us to a motorway service station supposedly somewhere near our village but we don’t know how near, so we stay on the bus. This is a big mistake as we end up in a neighbouring village two kilometres away. Just as we’re contemplating some cross-country skiing to get us home, we find another bus driver willing to take us home via a back route. Safely back in our own village we struggle up the road and arrive home at around 7pm in the dark. It's unsurprising but also disappointing that Son hasn't been pacing the floor with worry and constantly calling mountain rescue. In fact I'm not sure he'd noticed we'd even gone out. The car is by now under about four foot of snow. We dig one of the doors out so that we can rescue the chocolate bar that's been left in the glove compartment and break open the Jagertee. 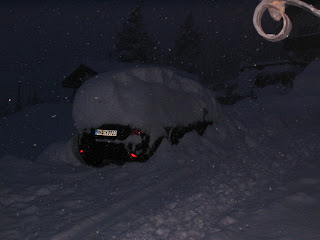 By the morning it's thankfully stopped snowing and rather annoyingly, as we leave for home today, the sun has also come out, typical. With the assistance of a tractor we dig the rest of the car out and the tractor also clears the road for us. We slither and slide down the hill and head off for our flight, only for BA to text us to say that it has been cancelled. Great. Eventually we manage to get through to them by phone and they impressively rebook us on an earlier flight. Problem is we really have to tank down the motorway to try and make it in time. We make it, just, only to find that our new flight has been delayed, back to approximately the time of our original flight. We get a BA meal token to compensate which just about makes up for our wine being confiscated because we forgot about the 'no liquids' rule and forgot to put it in out hold luggage.

Back in England we collect Doggo and head home.

All in all a very challenging and satisfying holiday. A week of snow and more snow punctuated by some skiing, plenty of 'romance' with L and not nearly enough Jagertee.
Posted by FitForNothing at Saturday, March 22, 2008