It’s all a bit stressed in the house this morning. The reason is, and I'm sure it's not been officially sanctioned to say this, partly because Daughter now has contact lenses. As anyone who has them knows they can take a bit of getting used to, especially the technique for putting them in, it requires patience. Daughter and patience have, as far as I'm aware, never met.

The other reason for the stress is as usual Doggo. As I depart on my bike, I'm a little concerned that L might return later without one or both of them but my fears turn out to be unfounded.

Note that I'm on my bike yet the whole nation is supposedly gripped by the worst storms in living memory. It's a good job I don't believe the weather forecast. Wind? What wind? Just because it's a bit rough down south they put the whole country on red alert.

The ride goes pretty well now that I have a fully functioning set of wheels again. That is apart from having a bit of a battle with a couple of 'pavement people' who curse me for being in 'their' way. Hello? This IS a cycle path you know. As stupid as that may be, IT IS. Don't blame me; blame the council. Personally I'd rather be on the road anyway.

At this point I shall make my apologies to Angela Carter for posting a cheque to her because she is of course no longer with us and hasn't been for 16 years. She died young at only 51, just when she seemed to be really hitting her stride. ‘Wise Children’ turned out to be her last book.

Perhaps I was a bit quick to mock the weather forecast because at about ten to five a massive storm hits. I hang on for five minutes and luckily the worst of it blows over.

In the evening we're out being cultural again. Last summer, when we were holidaying in Durham, I stumbled across an article about the comedian Richard Herring and his 2007 Edinburgh Fringe show that he called ‘Oh F*ck, I’m 40’. I blogged about it here.

Well he’s currently touring with that routine and tonight he’s in Nottingham at The Approach, so I talk L into going to see him with me. As a comedy venue, The Approach is ideal and we get a good table with an excellent view. Then fortified by two pints, a Legend and an EPA while L has a rather large red wine, we settle down to be entertained.

Self confessed 'kidult', Richard Herring comes on stage and is immediately into his stride, aided by a few props:- a skateboard he can’t ride and a collect of t-shirts which he makes gags about. He explores the consequences of interpreting the slogans on them such as ‘Give Me Head Until I’m Dead’ or ‘Free hot dog. Bring your own buns’, as binding contracts.

This sets him off for about ten minutes on the subject of ‘bumming’, which isn't a common term I believe and I’m not sure quite why he chose it because given his obvious like of naughty words there are many others he could have chosen. He repeats this word many times mainly for the benefit of the blonde girl down the front who he seems to have taken a liking to.

He does pick on other members of the audience which explains why the seats nearest the stage were the last to be taken. One chap who he ‘discusses’ blow jobs with looks ready to die and you can see the woman next to him inching away from him. I hope they’re not on a first date because it could be their last.

Continuing the sex theme there’s a gag about how talking dirty can go horribly wrong if you get pedantic about it and he describes his first ever fight which apparently happened recently in Liverpool with a university lecturer in front of an audience of (yes you guessed it) 21-year-old girls. 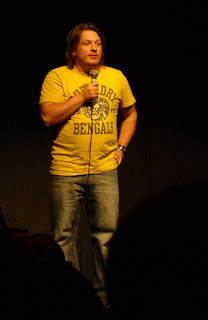 At other times he tries to be topical. A sideways swipe at Chris Langham works but other cracks at paedophilia and gun control get a mixed reaction from the audience. So he returned to the safe ground of the juvenile stuff which at least went down well with the youngsters and most importantly the blonde girl.

His comedy is a mix of good and not so good. The problem is he often delivers some very funny lines but then stays on topic so long, pushing things too far, banging home the same point, that it is no longer funny. The best thing is his observations about being male and 40, some of which are spot on. L obviously realises this too from the sideways glances and the occasional hand on my thigh. It was his interpretation of climbing the hill of life, where ahead is decay and death; behind is the utopia you've regretted rushing through, that got me here in the first place. It's probably not good news for a fast ageing comedian that his philosophical moments are more entertaining than his comedy.

Generally though he sends himself up and his own attempts to still be the age he feels, which is 20, except when walking upstairs. He’s made his name acting as a perpetual teenager on stage so why change now.

Towards the end he returns to the girl down the front and gives her his final sales pitch, impressively maintaining eye contact with her while saying some extremely suggestive things.

The advantage of being 40 and not 20 is the knowledge of life that you've gained along the way. Herring does not let on to having gained much of that until the end when he finishes by telling everyone to make the most of their life on this rock of ours. Take your time climbing that hill.
Posted by FitForNothing at Tuesday, March 11, 2008