In For A Medical

It's -3 this morning, ideal cycling weather. However my bike is in for a much needed medical today so L kindly lends me her bike. I have to keep up the cycling because they say cyclists have fitness levels comparable to non-cyclists who are ten years younger and I'm going to need every year of that on Saturday.

I coax L's bike out of our shed and it reluctantly emerges blinking into the sunlight, it doesn't get out much. Riding her bike is an experience but a nice one. The absence of clip-in pedals confuses me, rather than having to twist my feet out I have to remember how to pull them out, this nearly causes an embarrassing moment or two. On the plus side, her gears remind me how slick mine used to be. I'm also relieved not to get a puncture because I have neither tube nor pump with me.

It's interesting to note that people who usually acknowledge me don't, I assume this is because I'm now on straight handlebars rather than drops and vice versa, people who ignored me before now say hi. How odd.

A chap blasts past me on his MTB at the lights cutting it fine before they change to red. He's obviously not been following the court case of the motorist who's been sentenced to four years in prison for hitting and killing a cyclist while she was texting on her mobile phone. A just sentence indeed but the cyclist didn't help himself, because he had gone through the lights on red when she struck him. He died of head injuries, presumably made worse because he had not been wearing a helmet, just as the chap passing me on his MTB wasn't.

Time wise, it's interesting to note I take almost exactly the same time to get to work as I normally do.

L does the honours with my bike and drops if off to be serviced, for which I'll be eternally grateful. So now both of us are being eternally grateful, which is very promising. The diagnosis is serious but not terminal, my chain is so shagged that its tension is off the tensionometer, I'm not sure whether to feel proud about that or not. Other parts surprisingly pass the MOT.

On the way back from dropping it off, L pops into a shop and buys herself a new vest. Which is apparently my fault. All the same I look forward to testing it out.

Yesterday L was moaning that someone had put a stash of biscuits in the coffee room at work. She avoided them yesterday but today she emails to say her computer has made her have four of them. Hmmm, bit rich blaming the computer for her indulgence. She says her PC is running that slow today it would be quicker and healthier to cycle her messages over to me, that is, if I hadn't got her bike.

As usual I go for my regular Wednesday swim and it's all happening at the Leisure Centre. When I arrive there's an argument going on between the management and a group of footballers, who for the second time have had their booking cancelled without either being given a reason or being notified. They'd even paid up front in cash. They got a refund and were offered their next booking for free. Unfortunately there are no free evening slots, they are offered 4pm but they point out they'll be at work then. Good job they're planning on closing some more leisure centres in Nottingham isn't it. 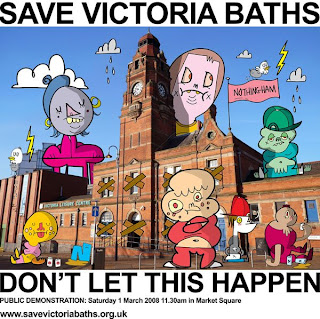 It’s a lot quieter in the pool this week, thankfully. There's an odd sight in the next lane, there's a girl all wired up with headphones. I don't know if this is a waterproof mp3 player or whether she's got one of those devices that beeps in your ear to synchronise your stroke. L's got one of those, although not sure if she's used it. I could do with one to remind me when to take a breath, it might stop me inhaling so much water.

Unfortunately my legs don't feel up to many lengths, I think it's because of using L's bike and the saddle not being quite the right height for me. I get cramp, so I cut it short.

There's more excitement when I leave. A male swimmer is standing in the foyer area in just his trunks, dripping wet, remonstrating with a girl (fully clothed), and apologising profusely for standing her up (unintentionally). She doesn't look at all fazed or embarrassing by the scene he is creating (or the puddle) and gives as good as she gets. It attracts quite a crowd. I think he wins her round but she leaves him in no doubt that he's got work to do if he's hoping to get something out of her tonight.

L goes out for a long run and then on to Guides. Doggo and I go training again.

I’m the only one in the house not reading a smutty book at the moment; I'm feeling a bit left out. Son is studying Angela Carter's 'Wise Children' for his A Level. L does like to keep up with her children’s literary adventures, so she's started reading it too. It’s about two 75-year-old twin sisters reminiscing about their sex filled lives. L would also like to read Daughter's new book but she's up to her neck in Cholera at the moment. Daughter's now reading 'Fanny Hill' or 'Memoirs of a Woman of Pleasure' as it's known but it'll have to go some to be better than Son's book with its constant sex scenes, on the train, in the bushes while the house burns, etc etc... It's enough to make you want an early night.
Posted by FitForNothing at Wednesday, March 05, 2008