A Lot Of Lycra

A small lie-in and coerced again, it must be a green week. Then I take Doggo for a damn good kicking on the park because we're dumping him for the rest of the day. Hopefully this will again have the effect of boosting his enthusiasm for his agility.

We're at the Velodrome in Manchester in time to see our pursuit quartet qualify for the gold medal run off. We also get our representatives into the two other finals today.

After spending the afternoon watching the qualifying we, and everyone else, head to Asda for food. A bit of an oversight for the Velodrome when all its customers are heading elsewhere to eat.

I'm sure you've already read about it courtesy of the wall-to-wall media coverage (ha ha) but there are three medals up for grabs today and we didn't have to listen to any other anthem than the British one as Britain brought home all three gold medals. I'd picked this day to go hoping it would be our best day and so it proves. 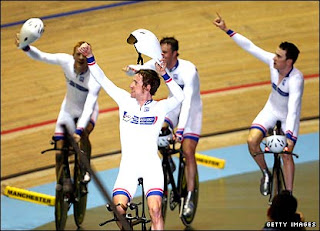 In the women's individual pursuit Wendy Houvenaghel set a new British record but it only stood for a matter of minutes until Rebecca Romero lowered it. It meant Houvenaghel had to race for bronze where she was beaten by Australian Katie Mactier. Romero though was into the final for a rematch against American defending champion Sarah Hammer who beat her last year. She exacts revenge and takes gold and boy was she pleased about it. 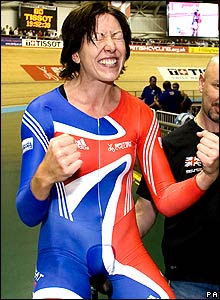 Victoria Pendleton and Shanaze Reade set a new world record in qualifying for the team sprint final. Then in the final, they were slightly behind the Chinese but a storming second lap by Pendleton clinched it. 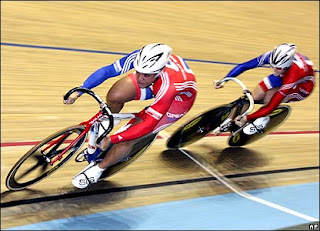 Despite the medals, possibly the performance of the day was by Chris Hoy. Hoy was tactically out-thought by Dutch former world champion Theo Bos in the first race but then won the two remaining races by the slimmest of margins to go through 2-1. Having disposed of Bos, who was probably the favourite for gold, how far can Hoy go? The conclusion is tomorrow.

I was a bit concerned L might find it all a bit dull but she seemed to enjoy it. She brought a couple of books but didn't get time to read much, so it must have gone ok. The fact that all the cyclists do their warming up in the centre of the track meant there's always something going on. There was always some chap (or thankfully, some girl) keeping the crowd amused by stripping themselves in or out of a lycra suit. L said she was fascinated by the psychology of it all and presumably all those men in lycra. I know what she means; about the psychology, it's the same cycling through Risley on a morning and the mental battles that I have to go through with my fellow cyclists.

Doggo is very pleased to see us when we get home, almost as pleased as he is to see the garlic sausage we've brought.
Posted by FitForNothing at Thursday, March 27, 2008