We Could Have Gone To See SLF

The weather has suddenly dipped cold again. L goes out for a slither around the papers with the dog while I manage to limp to the bus stop. The thigh I strained, either in Sunday's race or in the deep sand while training on Monday night probably isn't up to biking. Not with something else very silly coming up this the weekend.

As is usual at this time of the year, e.g. a few weeks before we go skiing, L is spotting all the skiing disasters in the news. Such as today's selection, 'Snowboarder falls 80ft to death' and 'Man dies as hurricane hits Alps'. That'll be my mate Emma then.

L leaves work a little early and goes home to sharpen her heels in readiness for tonight's gig. It sounds like she's expecting a crowd and she has said she intends to be on the front row.

Of course, we could have gone to see SLF, who are playing at Rock City tonight but instead we're at the Bodega Social Club for the third time in less than a month. The ink stains on my hand from the 'Bodega' stamp are getting more stubborn to remove with each visit. We're here to see the 'gorgeous' or is that 'delicious' Delays. L adores them and her adjective to describe them varies depending on her mood. So I'm being the dutiful partner, sacrificing a mosh to the ageing punks and instead spoiling her, a kind of anniversary treat, and she has promised to be eternally grateful.

We arrive just as the support come on stage. They are called Scarlet Soho and like the Delays come from deepest Hampshire and their influences exist somewhere in the dark spaces between the Associates, Visage and Tubeway Army. Consisting of two men and a girl, their pumping 80's beat is good at first but grates very quickly. They diversify little, occasionally bordering on Communards style disco, occasionally on glam. At one point we think they're about to launch into 'Ballroom Blitz' but they don't. It's almost all synths but the drummer is very good, although I can't see him on stage. For ages I'm convinced that they don't know how to turn him off because they don't pause between songs at all, until right near the end. They occasionally pick up guitars and bass but can't seem to summon up more than the most rudimentary of chords.

The Delays take ages getting set up, or rather one of their road crew takes ages, he does a longer stint on stage than the support band do, continually tuning and re-tuning all the gear. I'm tempted to shout out some requests for him.

The venue is filling up; it could even be a sell out, although it's a surprise to see the Delays at such a small venue. Their records have always brought critical response for their Cocteau's meets early 90's shoegazing sound (you remember Slowdive, don't you?), if not loads of sales. I had the luck to see them three years ago supporting the Manic Street Preachers, so I'm one up on L there, when I thought they sounded a bit like early Lush, during their ethereal period.

I can't see the old chap who was down the front at the Von Bondies last week, bet he's at SLF, the swine. There are two girls behind us giving me earache, talk talk talk. I know what one of them has had for tea, what she's doing over Easter and I don't know how she's going to get her essay on Latin American History done on time.

Where as Scarlet Soho knew only one chord, Greg Gilbert of the Delays clearly knows a few more, quite a lot more. The four piece from Southampton start the night with the 'woo woo' sound of 'Long Time Coming', then treat us to a set of favourites, that even I know, together with a few tasters from their forthcoming third album which is to be called 'Everything's The Rush'. The first of which 'Touchdown' seems a bit miserable (Slowdive again!) but the new stuff they play later is better. 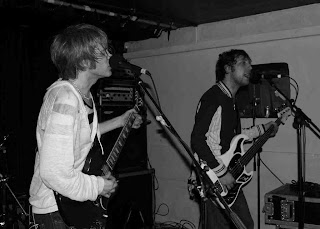 Only three tracks in and Greg seems to have forgot the set list because he tells us 'this ones about chavs' and then apologies for giving misinformation before bursting into a bouncy 'Hideaway' which clearly isn't. In fact he tells us that of all the next few tracks are about chavs, I think he's having a go at his brother Aaron on keyboards because it's not until Aaron takes off his very chav jacket that they finally play said song, which turns out to be 'This Town's Religion'. A gutsy track I wasn't familiar with off the 'You See Colours' album, which sparkles tonight. I will have to listen to that again. 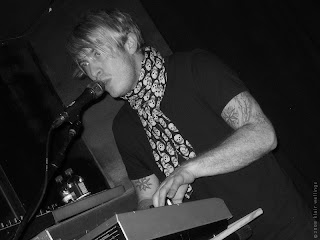 Greg is very comfortable with the crowd, chatting almost constantly. The rest of the band seem content to stay in the background. They treat us to their new single 'Hooray' which sounds poppy, dare I say it's got a touch of the Hoosiers about it. It's ok but not as good as 'Love Made Visible', their last single, which sounds impressive tonight.

A new song called 'Pieces' is a complex 'piece' that will need a few listens. Greg tells us it's been around for a while but they couldn't decide on the right arrangement.

People are pushing forwards a touch and it's getting quite cosy down the front. I think the girl behind me is rubbing her chest up my back. She can pack that in, I'm not helping her with her essay, in any case I know nothing about Latin American History.

He dedicates 'Nearer Than Heaven' to anyone who bought 'Faded Seaside Glamour' and invites them to sing along, which is just so wrong because nobody in the audience can get their voices anywhere near high enough to do it justice. Greg himself though isn't so falsetto tonight with the exception of this track and the closing track 'Valentine', which goes down a storm. A whole set of falsetto would have been too much. The band sound decidedly rockier tonight. I'm suitably impressed. 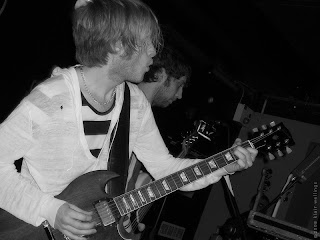 I'm wrong about nobody in the crowd being able to hit the high notes, a chap shouts for an encore by doing a very good impression of the 'woo woo' high bits in Valentine. The roadie chap is back on stage fiddling with things, we now know his name is Robbie. I think Robbie is desperate to be in a band.

They return to play a storming 'Panic Attacks' which is much better than on record and then close the night with a rapturous 'You And Me'. After reminding us 'We Are Delays' for the umpteenth time, they're gone.

We could have gone to see SLF but we didn't. It was a good call and L did take me home to express her gratitude.
Posted by FitForNothing at Tuesday, March 04, 2008