L and I do both paper rounds this morning as both the kids are in Derby. I am gutted not to get any tips, mars bars etc. Well not from the customers anyway. My fellow delivery person is much more accommodating.

I ring up to check to see whether my skis are ready for collection, more in hope than expectation and I'm pleasantly surprised to find that they are, even if the price has craftily increased since I dropped them off. While we're out we trawl around trying to find some ski gear for Son without success. There's only XXXL stuff left on the shelves. Which is hardly surprising, as you don't see any XXXL people on the slopes, so it makes you wonder why they manufacture it in the first place.

A superb FA Cup weekend continues as I watch Cardiff dump Middlesbrough out. 3-0 to the underdog. After taking Doggo on the park I return home to see an impressive West Bromwich Albion dispatch Bristol Rovers. Oddly, for once, a result true to form.

Oh how must those mid table Premiership teams be ruing putting out the weakened teams in the early rounds which saw them get knocked out by lower division teams. Their excuse was that they'll never win the cup because one of the big four clubs always do. How wrong they were.

In the evening, I cook a chilli and share a bottle of Crianza with L. L gets on with 'Cholera' while I watch a film I've wanted to see for ages. It's the German film ‘Leben der Anderen, Das’ or 'The Lives Of Others.

It's set in East Berlin in November 1984, five years before the fall of the wall. Eastern Germany is controlled by the Stasi, the secret police, who specialise in getting ordinary citizens to inform on their friends, neighbours, work colleagues, and even their own family usually by bribery or blackmail.

Georg Dreyman is a 40-year-old playwright working in state-sponsored theatre who falls under the suspicion of the regime and consequently his apartment is bugged and his movements are monitored. The Stasi agents led by Captain Gerd Wiesler keep a written record of everything he says or does right down to documenting his lovemaking with his actress girlfriend, Christa-Maria with whom he shares an apartment.

The twist is that as Wiesler listens in on the 'lives of the others' he discovers a life of love, freethinking and principal that had previously been alien to him. He even starts to like Dreyman and develops a conscience, realising that he has no right to know Dreyman's most intimate secrets. When Dreyman starts to write articles for the Western media criticising the GDR, Wiesler plays a dangerous game by not reporting it and falsifies his reports to his superiors. 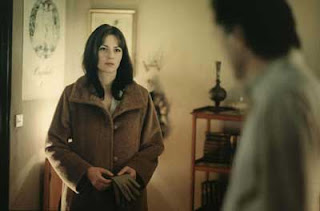 All the same, the system refuses to be beaten and frustrated by Wiesler's lack of success the Stasi attempt to turn Dreyman's girlfriend against him. Christa-Maria is already being unfaithful to him with a Stasi official because she feels she has to, so she's an easy target. They succeed and Christa-Maria betrays him. Wiesler intervenes to save Dreyman but she doesn't know this and wracked with guilt she throws herself under a truck.

At the end, post collapse of the GDR, Dreyman gets to see his Stasi file and begins to understand parts of his own life that he couldn't comprehend before. Its fascinating story and a great film depicting the grey world of the former East, totally enthralling.
Posted by FitForNothing at Sunday, March 09, 2008