L reckons the romance of last night got to me because I was throwing myself around in my sleep, keeping her and Doggo awake. Either that or I had too much cheese. More than likely I was having a nightmare about tonight’s race. All the same it's some achievement to keep the dog awake.

L walks to work in a strappy top, clearly on the pull. She denies it though, says she was simply training hard and working on her tan at the same time.

Maria Sharapova turns up for Wimbledon and immediately bonds herself to the British public, by seemingly coming straight from the night club. Looking every bit the typical British chick out on the pull, in her shorts and a see-through top. Not that this is much good to us at work, where we are listening on the radio. 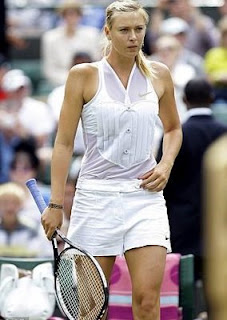 Well here we go again, the Nottingham Grand Prix, four running races in nine days. Four times the fun or something like that. L's dreading it and is drugged up on ibuprofen to get her through the pain barrier. She has a physio appointment for the day of the last race by which time she'll probably be crawling, mind you, so will I. My knee still hurts but only when I kneel down or it stiffens up when I sit, but I should be ok.

First up, a 10k at Holme Pierrepont. Last year, when I was a novice in his first race, I got caught up in the middle of the pack and finished in 42.06 which, good though it is, I should be able to beat this time.

On the start line I see a few familiar faces but not too many. Then I bump into a friend of ours, an orienteer, who's doing his first running race and the whole series. Baptism of fire eh? He starts up front with me, hope he doesn't follow me; I wouldn't want my stupidity to rub off on him. 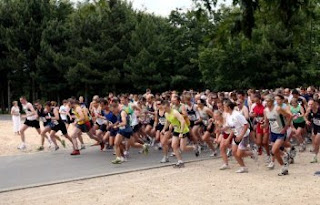 I see her immediately, the girl with the unnecessary ponytail. I naively think I can keep up with her, despite the fact I've never beaten her, and tuck in behind her. Big mistake. By the 1km marker I realise how out of my league she is, as she disappears off into the distance.

My first km is too fast, as it always is but this time I fail to ease off sufficiently. This isn't my fault, other people are coming past me and you don't give up a position without a fight, do you?

At 3km, I am still faster than my Sinfin pace. Scary. At 7km, I'm still on that pace but I suffer badly thereafter. Some annoying git, passes me just before the line and I crawl home in my second fastest 10k time ever but oh how I've paid the price for that.

After a brief dying spell, I grab a drink and hobble off to get Doggo, who is parked at the other end of the lake with the geese. L has warned me that she may well collapse in a heap amongst the geese. This would mean that she was a bit off course, so I check but there's no one lying there at the moment. L may not have found the Geese but someone's grey collie has and it's having a damn good roll in their droppings. Its owner isn't going to be happy. Hang on a sec; I recognise that dog.

I finally retrieve Doggo and we go back around the lake to meet L. As we stand waiting for her, I'm appalled at the bad hygiene of the runners, or is it me. The smell is appalling. Everyone seems to be surreptitiously sniffing their armpits, checking it's not them. No folks, it's not you, the problem is right here at the end of this lead.

I had promised Doggo a trip to the pub. No chance now. He stays in the car as we go for a pint. Not that the car will be usable with the windows closed for some time. He gets a damn good brushing and a bath when we gets home. He takes his 'punishment' well and the smell is a little less but he's not a popular dog.
Posted by FitForNothing at Tuesday, June 24, 2008