Back Home, The Sportaphobes Are Watching 'My Fair Lady'...

Tennis analogies today, as I sneak a quick set against L before heading off in the car to work.

A new study for British Music Rights has discovered that half of the music stored on the MP3 players of British youngsters hasn't been paid for. The average 14-24 year-old has 1,770 tracks on their MP3 player, but only half of those had been legitimately paid for.

They seem to think this is bad news. At school in the 1980's it was well known for LP's to circulate around the whole class for copying. So on that basis; 'half' is major step forward. I can recall some tightwads whom I can never recall shelling out for any music at all.

Talking of music, I haven't seen a lot of Glastonbury but every time I did look at the coverage, they seemed to be rerunning Kings Of Leon's set. Probably because it was totally awesome and means I might have to swallow my pride and do the Arena next time they visit.

We've been seeing a few old red Routemaster buses around Nottingham without really knowing what they were for. Well now, they're getting rid of them because they failed to attract enough passengers. Bellamy Coaches have been running a service between Parliament Street in the city centre and Arnold. A bit of publicity might have helped but I imagine it's going to be hard work muscling in on Nottingham City Transport who are desperately trying to get everyone on pre-paid cards, which is good in a way but kind of forces you use their buses.

At dog class in the evening, everyone has half an eye on the tennis, where Andy Murray produces a stunning fight back from two sets down to beat Richard Gasquet. In the third set, Gasquet even served for the match. The epic contest finished at half past nine and in near darkness. Cracking stuff though, even on radio. This is why sport is so cool, anything can happen. The Scot now plays Rafael Nadal in Wednesday's quarterfinals. 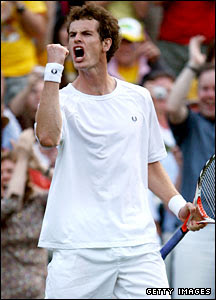 Back home, the sportaphobes are watching 'My Fair Lady'... Mind you L and I get to finish our game.
Posted by FitForNothing at Monday, June 30, 2008