I defy logic this morning, and despite the pain in my legs, I bike in to work. However, almost as soon as I get the bike out, I feel that some divine force is trying to give me a seriously large hint not to cycle. Firstly, my bike has somehow acquired a flat tyre since I last used it a week ago. So, I had to put a new tube in, which made me late. Not good news when I was hoping for a nice easy ride, now I've got to 'tank' it.

Then when I got onto the road from Ilkeston to Spondon, I found that whilst I've been temporarily off the road, those fun loving people who maintain our highways have loose chipped this stretch. Why? This was one of the best stretches of tarmac in the area, which was why I went that way, now they’ve ruined it. Perhaps this is the councils idea of industrial action. Did you see that 15% (55% on a 27% turnout) of their employees have voted to strike over pay, that's about 1 in 7. So, we're going to have to put up with closed leisure centres and parks, among other things, for a couple of days next month. This should sell a few more gym memberships at the private gyms.

So a traumatic morning but at least I didn't have to get off and walk up the hills as I thought I might if my legs weren't up to it. In fact it turns out to be the best thing I could have done, as it seems to loosen them up a treat. Perhaps I should have taken this approach on Wednesday in between races. As L points out, walking appears to be my predominant post-race problem, not cycling. Cycling, in fact, turns out to be actually easier than walking.

There was nothing particularly interesting about yesterdays Henley by-election but then I happened to notice on the results the 'Miss Great Britain Party'. They fielded two candidates, which means they've not quite got the hang of elections. Fielding two candidates, standing against each other and splitting their own vote, not terribly sensible. 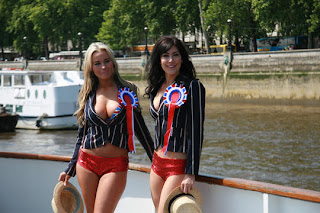 The party's manifesto 'seeks to empower women and make Britain in general and Westminster in particular more glamorous places.' Hmmm.

They didn't win by the way.

After work, I cycle to the pool, determined to get a bit of a 'float' in, to make up for not going on Wednesday. It's not lane swimming night and I can't get a shower because they're both full of kids but once in the pool it's not too bad.

I get a lane all to myself for a bit but then I'm joined by a girl who does a rather interesting backstoke. It's like breaststroke but on her back, so her legs kicks are rather, well bordering on the pornographic. I don't let such distractions put me off.

The swim goes well until my legs collapse after 24 lengths but I manage to limp the final 6 to make up my 30.

In the evening L heads off to the gym and I arrange to meet her afterwards to go to the pub. When I amble up to meet her with Doggo, we take a detour via the new ice cream cone but this takes longer than expected due to a languid dog and the fact that the cornet isn't quite where I though it was. So we run out of time and don't actually get to see it up close.

Thankfully, once at the pub, the Supreme is back on but Doggo still doesn't get on with the pub dog.
Posted by FitForNothing at Friday, June 27, 2008