The rain saves me from cycling, which is good because it takes the decision out of my hands and my knee needs a rest.

As I walk to the bus, I meet a wet dog and a wet girl in the street. Doggo and L by the way. The bus, as it turns out, is also full of wet females but not wet dogs.

I stand in the bus shelter sheltering from the rain, waiting for the bus along side one of the regulars. He's a grumpy old chap, well he's mid-thirties, but he never smiles probably because he's a Daily Telegraph reader.

When the bus comes he totally stuns me by turning to the person on the other side of him, a young blonde ponytailed female student (I hadn’t noticed her until then!) and offers her the chance to get on first and therefore get least wet. How chivalrous. Unfortunately she's a little slow in taking up his offer and when he steps out into the rain he obviously thinks better of it, barges her out of the way and gets on first. Charming.

The local NHS do come up trumps within 48 hours and Daughter gets her appointment. I would love to tell you about the mis-diagnosis's going around our house but I fear that I may get into trouble with the Blog Police, when she reads it, so I won't.

Talking of medical matters, L has given me some exercises to do to strengthen my dodgy knee. Well it's a list her physio gave her and she's passed it on to me. One of them needs to be performed on a step and every time I go downstairs at work to make a coffee I surreptitiously do them on the stairs. Makes it interesting balancing a tray of coffee cups at the same time. L says this should be done four times a day but unfortunately I only made two rounds of drinks today.

I take the bus home which has hoards of teenagers on it who are heading over to Nottingham for a gig. I don't want to jump to any conclusions but they don't look like Guillemots fans to me, as that is who we're off to see tonight. The Futureheads are also in town tonight, at the Rescue Rooms, but I don't think they'll be seeing them either.

I get home, cook up some pasta for all of us and then head on to the park with Doggo. L gets back from pilates just before we get back. Then it's down to Rock City. On the way we pass the same bunch of teenagers, that I saw on the bus, hanging around outside Junktion 7. Turns out Azriel are playing there. Who? Exactly. Turns out they're another of those hardcore metal bands who seem to appeal to the teens of today.

Rock City isn't full and the balcony is closed for added intimacy. We head up the staircase and get a good spot, perched at the top, like, well like a guillemot or should I say guiLLeMoT, as they prefer to write it.

First though, London's Royworld and their mainstream pop rock, promoting their debut album 'Man In The Machine'. It's a terrible name and none of the band are even called Roy, in fact what's worse is the lead singer is called Rod, so why not Rodworld? Can't be any worse, or can it? Or Robworld after the guitarist? Tim and Jerry-world, the other two members, conjures up cat and mouse games...

They play some pretty standard stuff that seemed ok but nothing stood out or grabbed my attention. After a few tracks, my mind and eyes soon started to wander elsewhere.

As the roadies set up for the Guillemots, I conclude that the sound check could take a while, as a huge array of equipment is wheeled out on to the stage including more effects pedals than I've ever seen before. They also bring out a stuffed lion, which looks like the King John character from Disney's Robin Hood. 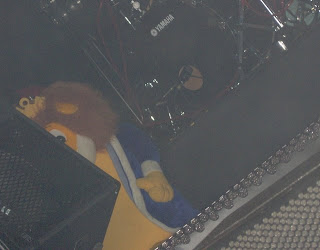 The lights go down and the baggy suited Fyfe Antony Dangerfield Hutchins takes to the stage clutching a hand held keyboard that I'm not sure he's actually playing. He sings the first verse of 'Made-up Lovesong #43' solo, sounding a little like Stevie Wonder. Fyfe it appears is a man of many voices and has a truly great vocal range. He sings about something he got 'off the paper round', hopefully not from round our way. Then he takes a seat at his keyboards and coloured lights go on everywhere, including a tube of red lights running all around the stage and the other band members join in for the rest of the song.

There are several birds on stage, there's one perched on Fyfe's keyboards, a guillemot I assume, and then there's Aristazabal Hawkes looking good in a near backless black dress with a double bass between her legs.

They drift into 'Clarion' without a pause with Arista now banging on a set of drums. Guitarist MC Lord Magrão is rocking out, as he does all night, even when the tempo of the song doesn't warrant it. Fyfe stays at his keyboards, side on to the audience, which isn't very rock n roll and annoys the hell out of me. Face your audience! He doesn't talk a lot but oddly asks what people's favourite paint was. Some bright spark replies with a yell of 'Green'. 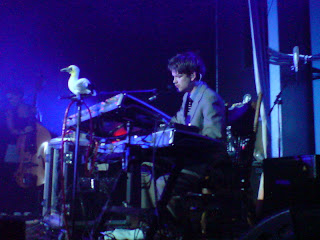 The title track to their Mercury Music Prize nominated debut album 'Through The Windowpane' follows as we get a sequence of slowish songs to open including their rather twee new single 'Falling out of Reach'.

'Falling out of Reach' would sit well on their first album but some of the other stuff on the new album 'Red' would not. Some of the tracks are very different for sure and all hell breaks lose when the band employ a major change of pace and play 'Last Kiss'.

Arista timidly shuffles forward to take main vocal duties, a more reluctant vocalist I don't think I've ever seen. She mumbles something, I think she says the songs about marriage. Oh dear. Major assertiveness lessons required and as for her dancing, well...

Putting all that and her rather quiet vocals aside, its still an outstanding moment. Also for Arista's dress, for which L has now placed an order.

Then they go from being completely manic back to soft and gentle although Fyfe briefly ditches his keyboards in favour of a guitar, for 'Standing On The Last Star' for which he sounds far too like Mika for my liking. He encourages everyone to clap and sing along to the ending.

The band are continually swapping instruments, often even mid-song. Fyfe's on harmonica for the intro to 'Words' which rather unfairly reminds me of that French-Tunisian crooner FR David and his awful schmaltz of the same name which sold by the skip-full in 1982. Thankfully it's not the same track but shockingly similar in sentiment.

Arista shows what a diverse girl she is by picking up bass guitar for the brooding 'Don't Look Down', which is my favourite track from 'Red'. It's a captivating song that picks up speed as it goes along until it gets insanely fast towards the end. My highlight of the night.

'Annie, Let's Not Wait', another of my favourites, has possibly too much drumbeat on it but its still good. Then Fyfe dons some very silly sunglasses as their punchy recent single 'Get Over It' picks up the pace again, dramatically so. When I first heard this being played on the radio, I couldn't believe it was the Guillemots gone all pop.

He tells us it's about being a bitter old man. Bitter it seems at ending up with the wrong girl and still longing for his unrequited love but hey, at least he's getting over it. 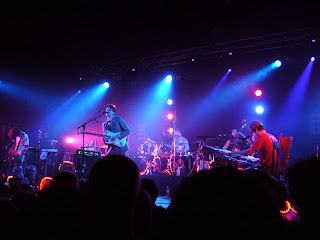 Fyfe is left alone to play a solo 'We're Here'. It's a quiet moment but initially the crowd are too busy chattering, still abuzz from a cracking 'Get Over It' which just needed to be commented on. Probably not a good time to play a slowie.

The rest of the band return with Arista now at the keyboards for the raucous Scissor Sisters sound of 'Kriss Kross' which closes the set.

The band leave the stage but the audience had barely finished applauding when they return. Oddly drummer Greig Stewart is now stripped to the waist with a face drawn on his torso, dancing madly, and waving a bell above his head while Fyfe plays the drums. What was that all about then? Quite surreal. Someone shouts out their perverse appreciation for Greig, Fyfe tells them to 'get over it'.

Normality is restored for 'Trains to Brazil'. Their debut record, that made a name for the band. A sad but clever song commenting on the threat of terrorism in the world these days. They re-named the song in tribute to Jean Charles de Menezes, who was shot by the police on the London Underground.

Fyfe introduces all the band members, including the lion. We even got a few words from the lion but he mumbled too much into his microphone for us to be able to make them out.

They end with a hyperactive 'Sao Paulo' with lots of percussion, with all the roadies joining in and Fyfe banging a dustbin lid.

A good gig but too many slow moments for me but then they're that sort of band. L compares them a little to Elbow, although not as witty or crowd friendly. Equally, if not more, nod-off-able at times. The new, dare I say 'disco', stuff doesn't really quite fit in their repertoire but gives an interesting contrast and possibly widens their appeal. I think perhaps, Fyfe is going through a mid-life crisis. You're supposed to start doing more slow songs when you get older but he's going the other way.

Home for a bit of pudding and passion.

(Photos pinched off the Guillemots forum. Sorry)
Posted by FitForNothing at Tuesday, June 03, 2008