Today redefines 'mad'. I'd already booked into a dog show at Elvaston Castle when L noticed that there was a 10k there on the same day. So, as it would have been rude not to, we both entered into that as well.

The day starts nice and early with us outside the paper shop, waiting for it to open so that we can do Son's paper round. Just to add to the enjoyment, it starts to rain. Task number one completed, we load up the car and head over to Derby. Just to drive home the 'mad' theme, L's bike is on the roof, as she intends to cycle home later.

At the dog show the weather is dry and there's no sign of the rain we've had in Nottingham. It duly arrives just after we do.

The scheduling has been kind to me as regards the dog show, giving me three early morning runs and two late afternoon runs. I also have to work on a ring and I manage to negotiate an afternoon-only shift. This sorted I set about getting the three runs in before we have to head off to the race which starts at 10.30.

It's good to have the rare treat of L there supporting us but we don't put on a very good show for her in our first event. We mess it up big time, well I do. I try and straighten Doggo up for his weaves but make a total hash of it causing him to miss the first pole and we are faulted. Perhaps I should have just trusted him to do them on his own.

Our second event is better and we post a clear round but in a small field we finish outside the top eight and the rosettes.

The fan club, my parents, turn up in time for our third event. Which goes really well, on a tough course, until I make a mess of a tricky sequence of jumps which results in Doggo jumped sideways over the long jump. My fault again, so I can't blame Doggo for anything yet.

We're all done by 9.45 and we head off across the road to the race. I think with hindsight, trying to cram three events into such a short space of time didn't work but it's a busy day and you can't do everything to perfection.

All morning the rain has been on and off but it eases for the start of the run. I try not to go with what appears to be a very fast pace but this just makes me distraught at the sheer amount of people who are ahead of me right from the off. This is clearly a better quality field than the one at Aston two weeks ago. 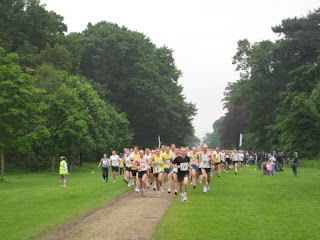 The first two kilometres are utterly horrible as they take us through the castle courtyards which consist of stone cobbles which prove very slippery in the wet. Not at all pleasant. The course does improve, although it's not the course they sent me a map of. Obviously all part of a sinister plot to unnerve me.

We come to a bottleneck where they take us through a narrow gate. A member of the 'fairer sex' barges everyone out of the way. She's impossibly skinny, right down to her elbows which come rather 'keen' when they land in your ribs. I'm sure the chap in front of me has a go at legging her down but she's far too fleet footed for him.

My pace is good, despite the cobbles, and for some reason I don't fade as much as in my previous races. When I do notice that my speed is slowing, as usual around the 7km point, I manage to force myself to lift it again. Good running, they say, is 80% mental. Ha, I assume they mean as in mind over matter, not just as in 'nuts'.

I can hear a dog barking hysterically somewhere, it sounds so like Doggo, but I'm sure he can't possibly have escaped from his internment in the boot of the car.

At 8km, it appears I might be on for a sub-40. I'm divided on whether this would be a good thing or not, actually I'd be happy for a mid-40 as that would be a good improvement on my previous best and save that sub-40 moment for another day.

I run past my charmer of a father, who spurs me on (not) with shouts of 'get a move on'. Not sure if that supposed to be motivational talk or not.

At 9km my pace has slipped a little but the sub-40 is still on. My knee, still reeling from it's encounter with the floor of the squash court, is now starting to throb and I'm beginning to struggle a bit.

Finally I approach the line, I can see the clock which says '39:'. I can't see the rest because someone is stood in front of it. So I can't see it counting up and daren't look down at my watch. I give them my best hard stare; words are not possible. Can't they see that I need to be able to see how long I've got to live.

I collect a 'red' t-shirt, not really my colour, and go find the fan club. My father is stood at the line still waiting for me to come in. He's so reliable... I wander up the course to look for L, who looks like she's hobbling and struggling a bit with her injury. Naturally she'll deny it. She's also less than impressed with my father's cheerleading when he yells 'hurry up' at her. Hmmm.

Afterwards I head back to the dog show, while L manages to cycle home. Doggo and I clock up two clears in our afternoon runs but no rosettes. Both are fast courses for fast dogs, not for us.

Distressingly my finishing position in the run is down in the 40's, out of 334. Still though a pretty successful day.

In the evening we have L's brother and his partner round for Sunday dinner. It's a pleasant evening and the wine flows, although mainly down the necks of L and me. We've earned it.
Posted by FitForNothing at Sunday, June 01, 2008