A Good Advert For Glasgow?

I finally get to do some training and I ride into work on my bike. Very pleasant it is too, a glorious morning. It's far too nice to be in the car but judging from the amount of traffic on the road not everyone agrees with me.

Its a very busy day at work, lots of stuff to sort out as well as lots of blogging to catch up on.

When I get home, I take Doggo out, although L has already seriously de-edged him on the paper round. I bring him back half an hour later, totally creased.

L's been spending, on another new top that she can't afford. Tut tut. It's very nice though, although she's worried its too low cut. Hmmm, is that possible? and if she was worried about that, then why did she buy it? It looks perfectly fine to me, quite high cut if you ask me.

With L decked out in her new revealing outfit, we head off to tonight's gig. Our resident rock chick joins us, although she seems to be on a downer, as is often the case when the gig isn't of her choosing. Of course she could have turned down the free ticket.

On the way, L takes the opportunity of Daughter's presence to try and get her a passport photo done. We stop at a booth outside Sainsbury's which refuses to work, so L goes off in search of a refund. Then suddenly it does work, so we get the photos for free but then they tell us they're too 'pink' for passports and that they'll get rejected. Oh well, perhaps it's worth a try anyway.

We're at Derby's new venue tonight, The Royal formerly the Royal Hotel although it closed as a hotel in 1950. Both tonight's bands comment on the posh-ness of the surroundings when they come on stage, which is quite late. The support act play at 9.15, the main band at 10.15.

First up are a band called Madskull. The name doesn't sound promising and neither does the lack of a drumkit. Then when a badly dressed group of scallies, looking like Oasis after they've eaten all the pies, walk on stage to the sound of 'My Boy Lollipop' possibly my worst fears are realised or possibly not. Turns out they're actually quite a nice bunch of lads albeit with impenetrable Scots accents who make quite a nice sound. I think they're funny, as in entertaining and comic sort of way. Apart from that second track which is called 'Bouncy' or something like that and is all my musical nightmares rolled into one. They only play four tracks, saying that's all they've got, as they've only been together a matter of weeks but they're not too bad at all.

For a band who only assembled recently, they have a lot of equipment and they take almost as long shifting it as they did playing. Then eventually dry ice and red lighting floods the stage as four be-quiffed figures dressed in black take the stage. Glasvegas certainly look the part, like a 1960's version of the Jesus And Mary Chain with Joe Strummer on lead guitar and singing in Glaswegian. L's analogy was a cross between the Skids and the Cold War Kids with a dash of Rab C Nesbitt thrown in. Which is priceless. As you may have guessed the band are, as the name suggests, from Glasgow or more correctly Dalmarnock. Mind you, it's still a shocker of a name, even if it is how many Scots jokingly refer to Glasgow.

After their impressive entrance, singer James Allan kicks off the evening with 'Flowers And Football Tops', a song big on emotion and seemingly about roadside memorials. Along with his cousin Rab on guitar and Paul Donoghue on bass, the three of them lay down a gorgeous wall of guitar noise. This is partly where the comparisons to fellow Scots Jesus And Mary Chain come from, I also wonder if they've listened to My Bloody Valentine. The guitar sound is backed by the simple drumming of Caroline McKay on a cut-down drum kit, who is slightly hidden in the shadows at the back of the stage. 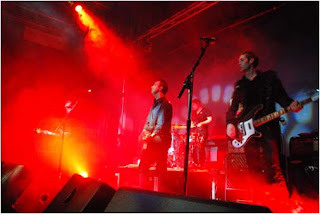 The place isn't full despite the hype and their recent appearance on 'Jools' so we can get up close and impersonal with them. Together since early 2006 with the much downloaded 'Home Tapes' demos and three limited edition singles behind them, it's taken a while for them to get noticed but finally they have been.

So have they been hyped for a good reason. Well yes. Tonight, their songs resonate off the walls of the impressive Royal without being as loud as I'd expected. Previous singles like 'Its My Own Cheating Heart That Makes Me Cry' are accompanied by fists in the air and football ground style singing from the crowd down the front but don't hold that against them. Each familiar song is sung back with increasing vigour as the night goes on, even the 'woo woo' Ronettes' bits.

There is no written set list; it's seemingly not needed for what appears to be a well-honed set. The well known downloads all take on another dimension live and are interspersed with a few new songs, such as 'Lonesome Swan' and 'Polmont On My Mind' which promise great things from their debut album when it is released in August.

'Geraldine' sounds wonderfully powerful and totally ace live. It is already L's single of the year and it's not even out until 23rd June. In fact she says the band are the best thing I've played her for a while. She's even bought the t-shirt. 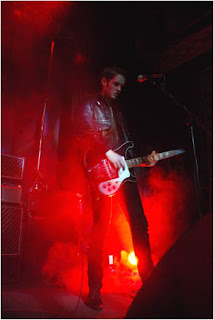 There is hardly any letup, as the band rumble through their brief but breathless 45 minute set, more than justifying the frenzy about them.

'Go Square Go' storms the stage and the crowd but then finally we get a break and a slowie; a new song called 'Ice Cream Van' featuring just James Allan's distinctive Glaswegian brogue and Rab on keyboard, although it sounds a bit like the funeral march. L tells me how moving it was the way he wrung his hands as he sung it. She says she was sure he was rummaging for a hankie in his pocket afterwards so he could have a little sob. I'm not convinced, I thought the lyrics were about sectarianism and he was wringing his hands as if he had them around someone’s throat. Funny how we see things differently.

They finish with 'Daddy's Gone', which is greeted with a big cheer. A track that was voted the number 2 single of 2007 by NME readers. Most of the crowd know it and carry on singing when James Allan opts not to. 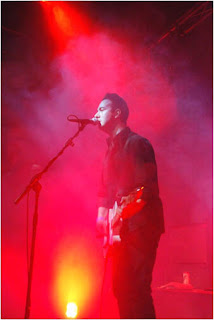 No sooner has he finished singing a final chorus of 'forget your dad, he's gone' and they're gone themselves. Almost as soon as the band are off the stage, the house lights and the music come on. Game over. Which is a shame. Not even chance to shout for an encore.

Despite the shortness of the set, these guys are clearly a class act with some great songs. Probably too short, it would have been good to hear them play 'The Prettiest Girl On Saltcoats Beach', but I suppose it was only £7. Hopefully longer sets will appear when they tour to promote the album.

So a great gig, despite them not having the cheeriest of songs; their repertoire consists of death, racism, absent fathers, social workers, infidelity... he's clearly had a rough upbringing. What a good advert for Glasgow. I've not really been there; don't think I'll bother.
Posted by FitForNothing at Wednesday, June 11, 2008