The Cornet of the East Midlands

London has Nelson's column, the North East has the Angel of the North but now the East Midlands has something bigger, if we're being size-ist.

Nottingham is now home to Britain's tallest free-standing work of public art, a giant ice cream cornet but without the dob of ice cream in the top. Presumably, that will be added later. It's actually called Aspire, it's 60m tall, made of steel, red and orange in colour and has been commissioned by to mark the University of Nottingham's 60th anniversary.

I rather like it and, as it has caused a huge amount of vitriol to be written on the local websites, seems to be well worth the £800,000 it has cost, all funded by an anonymous benefactor. Anything that can gets peoples backs up is fine by me. 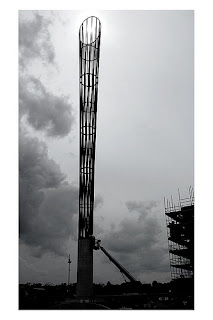 'It represents limitless ambition, the power to change your life through education.' Apparently, not sure about that.

On the way home from dog training I collect L from Derby where's she's been running, not that she's well enough to do so, and on the beer. We head home where she's promised me a romantic evening...

She metaphorically handcuffs me to an armchair. Her motive is to get me to watch her film of the year so far, the DVD of which has just come out today and L has rushed down town to get it. At the same time I rushed to Sainsbury's to get the 'Leffe', the ‘Innes & Gunn’ and the ‘Meantime Porter’ feeling that I might need them but sadly it's an AF Monday.

The film in question is 'Penelope', which has proved very popular with the women of our household. Although this may be more because of the men in it rather than the story itself. Anyhow, I'm about to find out. I will review this in trepidation of upsetting them.

Apparently, a member of the 'well to do' Wilhern family once knocked up his maid but then dumped her causing the distraught girl to top herself. Her irate mother, who by chance is also a witch (probably why he dumped her daughter), places a curse on the family. Subsequently the next baby girl born to the Wilhern's will be born with the face of a pig until one of them finds true love with 'one of her own kind'.

No legitimate girl is born to the Wilhern's for generations but then Penelope appears complete with a pig's snout. Although the curse must have weakened over the years because it's hardly the whole 'face of a pig' deal that was promised. Even so, after attempts at plastic surgery fail, her parents (Catherine O'Hara and an underused Richard E Grant) fake her death, I assume to throw the paparazzi off the scent, and Penelope is (kind of) locked away in the tower, in true fairy tale style. That is until she is older, when in an attempt to break the curse; her family lure potential suitors with a large dowry.

Are you with me so far? Well now suspend belief because once faced with Penelope's horrifically disfigured face, all the potential suitors run screaming from the room and even dive through glass windows to escape... Ahmm.

One of the suitors, Edward, even says he cannot bear to kiss her. Oh come on. Penelope isn't the least bit terrifying. In fact, she's really cute, in a Christina Ricci sort of way and doesn't research show that 95% of people kiss with their eyes closed anyway. Any 'normal' male would shag first, ask questions later... 'great sex Dear... by the way how did you get that awful nose job'

Right, so that's the obvious plot flaw out the way. Perhaps if they'd set the story in ye olden times and not in modern day, then this hypothesis might have worked.

Edward reports his 'horrific' encounter to the police but when he isn't believed, he decides to rebuild his name by teaming up with the tabloid reporter Lemon to expose Penelope. They hire failed pianist and gambler Max, played by a pre-Atonement James McAvoy and looking less of a wimp than usual, to pose as a prospective suitor and get a photograph of her. 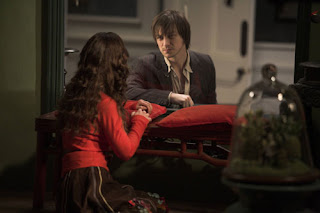 Max though cocks it up and falls for her but then decides he cannot pursue her because he is not of her kind and therefore cannot break the curse. 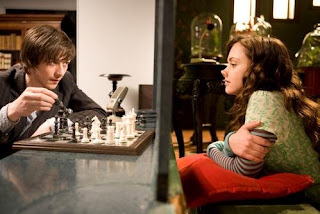 Fed up, Penelope does what teenagers do, throws a strop and runs away from home, wrapping a scarf around her 'hideous' face. Once out in the 'real' world she befriends Reese Witherspoon and her Vespa. Then when she is finally exposed to the world, she becomes a bit of a celebrity and presumably nets a multi million pound contract with 'Hello' magazine. So, she didn't really need to sell her own picture to the tabloids. 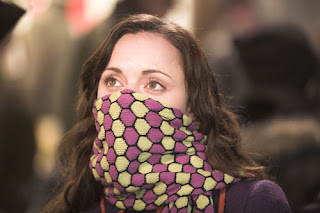 The studio had apparently sat on this film for two years, despite it's all-star cast. Among others, Nigel Havers, Lenny Henry and that guy from 'Shaun Of The Dead' all pop up. This makes you feel they thought there was something not quite right about it.

It's a similar cute fairy-tale to the recent 'Enchanted' and 'Stardust', it's very Walt Disney but actually with more in common with Shrek or Edward Scissorhands. Although without the humour of the former or the charm of the latter.

It's all over in around 80 minutes, just as I was getting into it. It would have been nice to have seen more of Penelope discovering the 'real' world. In the end, Penelope cures the curse herself by declaring herself happy as she is. So, Penelope gets her James McAvoy and lives happily ever after but it's difficult to believe the message about being ugly not mattering and it being the person inside that counts when Christina Ricci is gorgeous even with the nose of a pig.

L simply loves the romance of it but I though the romance was sadly lacking because the two leads spent so little time together. There are some good side jokes and good performances from Ricci and McAvoy but it could have been a lot better but in the end was just alright.

A pleasant evening and at least the romance, or was it the alcohol, rubs off on L.
Posted by FitForNothing at Monday, June 23, 2008