The chap is supposed to be coming back today to finish the fence, so we can't really go out anywhere. We expect him to turn up early so we don't even get to lounge around in bed until lunchtime like on a normal Sunday. Well that's not actually a normal Sunday, a normal Sunday consists of getting up at the crack of dawn for a race or a dog show but on an event free weekend we do like to linger a bit in bed.

The chap takes his time turning up and then, just as we'd about given up on him, he turns up at 4pm. He finishes the fence and completes what has been an excellent job.

So with all this hanging around, basically marooned at home, we have a rather relaxing Sunday doing nothing in particular. As I say, this is perhaps what normal people do on a Sunday. I'm not sure I could cope with this more than once or twice a year.

When he's gone we go for a walk to check out the remains of the old Nottingham canal on Lambourne Drive that we have only just found about. I've only lived here for 14 years. The Nottingham canal was built in 1789 to connect the River Trent with Nottingham, the pits of Wollaton, and the Erewash Canal. Fourteen locks were built between what is now Crown Island and Trowell Road. The remains of two of these locks and the canal basin can still be seen at Lambourne Drive. 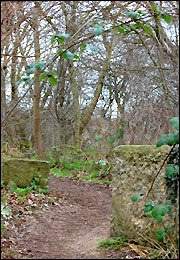 The area has recently been cleaned up by the Nottingham Breathing Places' SWAT team. 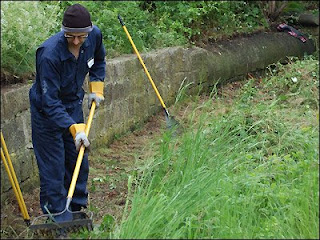