Another dog show today. Not a Kennel Club one but another lower level one from the British Agility Association. I won't go into details; it's all so complex but we're here on points collection to try and move up their grades. We are currently 20th in the agility league table and in the last promotion place. We just need to stay there until the end of August. If we slip below 20th but stay about 40th we are not automatically promoted but we are allowed to put in an 'application'. Basically, we're allowed to beg. Surely, a grade 6 is above begging? Perhaps... perhaps not.

Regrettably, in the agility event, the age-old weave problem resurfaces. Doggo skips the last two, seemingly just because he doesn't like me on his right. The good news is that even with 5 faults we still come 18th and 8 valuable points, which keeps us in 20th.

All the other events are 'jumping' events where, in the league, we are languishing in 60's but we achieve some solid results. 4th in Jumping, 5th in the Helter Skelter but we do a really scrappy run in something called 'Tunnel Teasers' which is actually indistinguishable from last weeks 'Up and Unders'. We do a clear round but only just; it's a rubbish run because Doggo doesn't listen to me. I'm not happy; we'll be 10th place at best. I give the errant creature a mini dressing down. He lifts an eyebrow in acknowledgement while sniffing a patch of grass, which is far more interesting than what I'm saying. Perhaps he knows something I don't because half an hour later, I'm apologising to him and shovelling treats down his gob as we are announced the winners. Stunned. Hmmm, for once the dog knows best.

Our three good 'jumping' results move us up to 20th in that league too. So not a bad day's work.

In the evening L and I get the bus over to Derby and pop into the newly reopened Royal Standard where they do a sampling tray of five beers with a pot of cheese on the side for a fiver, which is tempting but instead I go for something dark.

The pub is close to the Council House, so you would think it would be popular with the council workers but the Council have been trying to get the pub demolished because it's in the way of redevelopment plans for the Riverside area. The pub was boarded up in January 2007. Despite being a lovely old pub steeped in history, Cityscape have dismissed the pub as 'not worthy of retention' because it did not fit in with their mission 'to bring an exciting and vibrant mix of apartments, offices and high-class hotels to the banks of the Derwent'. I would hope not. 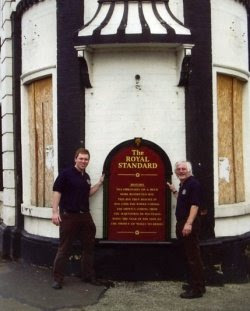 We move on to Trevor Harris's former pub, the Brunswick, where there's no Stationmasters Stout but instead Black Sabbath 6.0% and other strong beers. L oddly, and she assures me she's not pregnant, has a craving for Martini Rosso, which turns out to be practically alcohol free.

We share the bus home with a chap who is vomiting his alcopops all over the floor three seats behind us. Charming.
Posted by FitForNothing at Saturday, June 28, 2008