By The Skin Of My Teeth

My legs are still very stiff, so still waddling, all the way to the bus stop and then from the bus to work.

The new fifteen year old in the house was really quite chirpy considering she’s about to get hung, drawn and quartered by her English teacher. She was redoing homework at 5.30am on the morning after the night out before.

Somebody else whose had a birthday is one of my earliest heroes, Paddington Bear, who is 50. Michael Bond's first book about the bear being found at Paddington station, with a note attached saying 'Please look after this bear', was published long ago in 1958, when not even I was around. So happy birthday mate, you old git. Still living with Mr & Mrs Brown at 50 though, bit sad that. 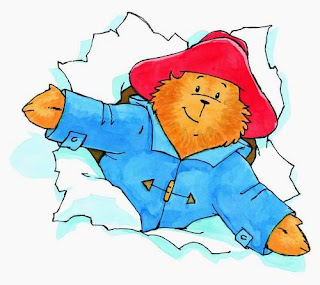 We really cannot cope with the brutality of it. We're trying to listen to the tennis but it seems the BBC are covering someone getting beaten up instead. All we can hear on the radio is continuous grunts of pain or is that just Sharapova playing tennis. Thankfully she loses, so we won't have to listen to that anymore.

L says I would've been so proud of her. She's walked home at lunch and then cycled back to work. She's supposedly going to be scorching along on her bike straight to the start line from work. Wow, she’ll be so fit. Injured beyond repair but fit. Those pills must be good.

The rain does briefly stop, long enough to enable me to get home, but then it starts again. Proper Grand Prix weather at last and a touch of déjà vu, it's just like last year. I delay departing the house, hoping the rain will ease. I kill some time kicking the ball for the still smelly one but eventually, the rain gets too heavy for him and instead he sits in the doorway, watching me kick it.

I have my new streamlined shorts on, which Daughter describes as looking like a thong. She's so flattering. They're really not that brief.

Finally, I jog across to the park on my still stiff legs, doing some poncy warm-ups as I go. L is already there; she's cadged a lift to the start.

We start and run across the grass. Thankfully, this year they've cut it short, so it's easier on the legs. That's two cuts this summer; they must be well over budget on the grass-cutting fund. The process of cutting the grass also has the benefit of flattening the molehills so there aren't as many lethal traps to look out for this year and also the field itself isn't flooded. All the same, I take it easy; I want a nice gentle start today.

I record 4.09 for the first km, which is appalling and redefines gentle. That's my slowest first km, since I started recording them, a few weeks ago. It's time to up the pace and I start overtaking people. Pace wise, I go too far the other way. 3.44. Now I just need to keep a steady 4 minutes per km pace and I'll record less than 20 minutes for the distance, which is my aim. I'm sure on fresh legs I could run 19.30 but not today. Not after a 10k only two days ago.

I'm getting tired now and losing places. I'm 8 seconds off my target pace at 4km, so I need a fast last km, most of which seems to be uphill but I should know this, I'm hardly unfamiliar with Wollaton Park. I dig in, pass a few people and basically cling to life by the fingertips. Just the final downhill bit to go now but I really hate this bit, especially as it's on grass, and I lose a couple of places.

For once I don't collapse on the ground because the grass is very wet! All the same, it's a struggle to stay upright. I grab a drink and wander up the course, looking for the drugged up one. I pass the time by checking the latest inflation figures. 36C they reckon now, up from an average of 34B.

After the race, we had intended to take Doggo to the pub but it's raining quite heavy now. So, we stay at home with some Meantime ales: - dark lager and Porter. Then we open the 'Innes & Gunn', L recklessly urges an Advocaat as a nightcap. I relent but keep a very close watch on her hand as she pours it.
Posted by FitForNothing at Thursday, June 26, 2008