The Cost Of 'Fast' Trainers

A frustrating morning. I head down into town at 8.30 to get my bike checked out. The diagnosis is that the gears are clogged up with road salt, only problem is their workshop is booked up solid for three weeks. All the same they take my bike off me, hoping to fit it in sometime. So I don't know when I'll see my trusty steed again.

Bike-less, so I jog home because a man is coming to quote for a new fence at 10am. He's late, which costs me the chance of returning to bed for a delayed lie-in. Instead Doggo and I cut the lawn, then my coach talks me into going over to a running shop in Derby to get some proper trainers. I part with £81 for 'fast' trainers, so they better be pretty damn fast.

We detour to my parents place, so that I can drop some clothes off there. My latest mad plan is to run there for the match on Monday.

L starts cooking up some carbs for our pre-race meal but my brother drops in, shouldn't complain really, to drop off a birthday card. Surprisingly Doggo doesn't try and savage him, they don't usually get on.

Later we walk down to Broadway. I have an EPA, I'm not being AF pre-race this time; you can have too much of a bad thing and it's only a 'training' run tomorrow.

Tonight's film is Happy-Go-Lucky (with hyphens), the latest film from Mike Leigh.

Poppy Cross (Sally Hawkins) is thirty and a Primary School teacher working in London. Her approach to life is to not take anything too seriously or preferably not seriously at all. Of course there's nothing wrong in being upbeat but she is annoyingly cheerful, far too 'up' for her own good and it actually makes her into an immensely irritating individual, along with her equally exasperating friends and her sisters. However once you get past your initial annoyance at her, the film grabs you as it contrasts Poppy with the other characters in the film and their different approaches to life.

Her younger sister is very downbeat with exams looming and pulls no punches with her comments. Her other sister has settled down, got married, is pregnant, has a house and a pension but is bitterly jealous of Poppy's freedom. Her fellow teachers have equally dull lives. Her headmaster's weekly highlight is a Flamenco class hosted by a teacher with men issues. Another teacher, Tash is swamped by the demands of her large family.

Despite being supposedly happy with her lot, Poppy has no boyfriend, which is presumably because she's simply unliveable with. Less clear is why her saner flatmate Zoë (Alexis Zegerman) is single. 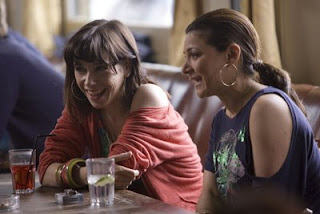 She also doesn't drive; instead she cycles everywhere. The reason for this, I assume, is because she is incapable of taking anything seriously it makes her un-teachable when it comes to driving. This is proven when, after the theft of her bike, she decides to learn.

Her policy in life seems to be to try and make everyone else happy but that is not a challenge she is set to win when faced with Scott, her practically psychopathic driving instructor (Eddie Marsan). Scott is the exact opposite of happy. He's an angry, frustrated, lunatic of a man tortured by his past. He berates her for wearing heels and for not concentrating. She dangerously pushes her luck too far with him. An oddity in the film is that we are told her driving lessons cost £22.50, yet Poppy always pays in notes and never receives any change. I wonder why she's tipping him? 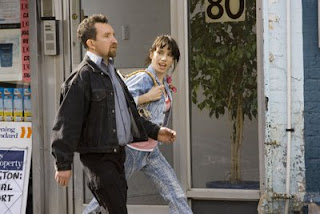 Her urge to do good and make people happy takes her into some dangerous situations such as when she befriends a homeless man but also reaps dividends when she correctly diagnoses a boy at school who has trouble at home and she calls in a social worker. Bizarrely the social worker asks her out. Seemingly not being satisfied dealing with troubled children he also fancies a go at the not-so-grown-up Poppy.

It all makes for very watchable viewing. There's some great scenes, one of Poppy in colourful tights and a g-string getting her back sorted by a physiotherapist, springs to mind.

Regardless of what happens in her life Poppy never stops smiling. Her attitude, irritating though it can be, is probably a lot better than the approach taken by other people in her life and that’s perhaps the point Mike Leigh is trying to make.

We head home for another excellent dessert from L, this time sticky toffee pudding, which is very authentic and will hopefully help me to a fast 'training' run tomorrow.
Posted by FitForNothing at Saturday, April 26, 2008