6am and up. Doggo stunned. Ditto L. It's early morning pond run time. It goes well, with no adverse effects from yesterday's run. Legs a bit stiff but nothing too bad.

L follows this with 30 lengths, she's just showing off naturally, and she teasingly tells me she's forgotten her hairbrush and is therefore sporting a wild look. Sounds great. Crucially she didn't faint in the pool.

Doggo and I had serious words this morning, and he’s had three slaps around the ears. As I was trying to extract him from the bedroom to go to work, he was sat by the radiator guarding L's dressing gown, which he's rather fond of, it's one of his favourite shags. He growled at me when I tried to get him to come away.

As L points out, a slap around the ears guarantees a duff dog session tonight. He's beginning to bear grudges in his old age. Well at least if he’s duff tonight he might be better come Saturday. He had the nerve to go sit by the lounge door once I’d evicted him from the bedroom. There’s no way I was letting him in there, although Son was up so he’d only got 5 minutes to wait for him to open it for him anyway. Bet the old codger’s on the settee right now enjoying his home comforts.

We're back at Monday dog class tonight after a month off due to skiing, bank holidays and a refit to the arena where we train. The downside of which is that they've now moved the equipment store to the far side of their now enlarged car park. So it's a massive hike with the equipment. Tonight we train on a course that was used for a recent Olympia qualifier. Doggo and I go clear at the first attempt, which obviously wouldn't have happened had we ran it for real. In fact he's rather good all night.

Despite the fact that I'm at training, we've also at another gig tonight. We're back at Rock City to see Elbow. They're more L's sort of thing than mine. She says they're very mushy and she's worried that I might nod off at the gig but I've been swotting up on them and I rather like them. If I can stay awake at 'Scouting For Girls' and 'The Hoosiers' then Elbow shouldn't be a problem.

I get back from class, do a quick change and straight out again. Doggo is just starting on his tea and almost chokes on his munchies when I walk back out the house again. He really can't believe that I've had the nerve to do that to him.

L and Daughter are already down at Rock City while I'm aiming to get there for 9.30, which is when the main bands usually take to the stage. So I can tell you nothing of the highly rated 'Two Gallants' who were supporting. I can also tell you nothing of the opening of Elbow's set, playing 'Starlings' armed with trumpets apparently, because they came on at 9pm and I didn't get there until quarter past.

When I get there, after I manage to find someone to take my ticket, the band are playing 'Great Expectations'. I try and find L but it's so packed I can't get through to where she says she is. I wasn't expecting a crowd. I though everyone would be lounging around on blankets and in deckchairs. I was so convinced that it would be sedate and only half full, that I even considered getting the dog a ticket.

I move through the crowd to the front, which is amazingly easy, no moshing tonight. The band launch into 'Mirrorball', beautiful and dazzling but slightly nod-off-able. Elbow are sometimes so laid back they're horizontal and some of their tracks do make you want to reach for the newspaper. At other times they're simply stunning.

After another track, 'Red' I believe, I decide I can possibly make it up the back steps, across the balcony to try and find L and Daughter from above. I have a go and find them; they have a great spot on the stairs. I join them and, because a lot of people find it impossible to stand still for 90 minutes, I'm immediately totally in the way. People are constantly pushing past me, including a chap who smells like he's soaked his jacket in nicotine. At least, thankfully some of the people squeezing past me are female.

From this new position I can take in the scene. Elbow are a five-piece from Bury and are fronted by Guy Garvey, a cheery and slightly rotund chap with an interesting line in witty banter. He could make it in stand-up if his voice goes.

As he communicated with the crowd, better than almost any band I can remember and generally legible, he came across as a thoroughly decent and down to earth sort of chap. At one point he tells us about their roadie 'Mexican Wayne' but he doesn't play the track he's hinting at, 'Mexican Wave', nor does he asks us to wake up their bus driver. Thankfully.

His band, as he keeps telling us, are all friends and colleagues of 18 years. I find it hard to believe that they've been together for 18 years and only produced four albums but Wikipedia says it's true, so it must be. In fact the five guys originally formed a band called 'Mr Soft' at Sixth Form College in 1990 but it wasn't until 1997 that they became Elbow. Even then, their debut album 'Asleep in the Back' was not released until 2001. 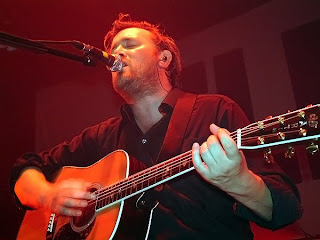 Tonight Guy also surrounds himself with attractive women, in the form of a three-piece string section and another girlie who's acting as a runner with pints of water for him. The 'orchestra' are balanced at the back of the stage, as there's not much room with a large set of keyboards and an equally large drum kit. It would be a shame if they outgrew venues like Rock City because they need a bigger stage.

I'm on the steps in time to see the band perform their recent single; 'Grounds for Divorce', which sounds amazing live, a rocking departure from their normal style.

'Mondays is for drinking to the seldom seen kid' he tells us. Well no actually Mondays are usually AF for us but if we'd known we'd have had a beer.

The 'Seldom Seen Kid' is their friend Bryan Glancy, a fellow Manchester songwriter, who died recently and has been immortalised in the title of their new album. Like their previous three, it mixes epic melancholy ballads with more upbeat but equally epic numbers. It's also possibly their best.

'Forget Myself' follows and obviously prompts a huge sing-along, many octaves lower than last nights. Tonight's crowd is more mature, although a good mix of ages, with more men, and slimmer women. 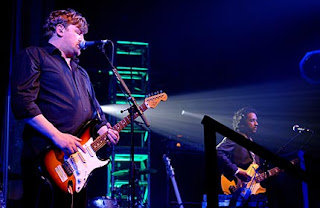 Also from the new album, 'The Stops' comes over well and they play a haunting 'Loneliness of a Tower Crane Driver' a song about 'love and the construction industry'. All in all, a set pretty much filled with spellbinding songs. Although regrettably I miss 'Leaders of the Free World' which they threw in early.

Guy reels off details of the latest births accredited to the Potter brothers, Mark on guitar and Craig on keyboards. Some wag enquires whether they have the same mother, it's a rare moment that Guy gets upstaged from the floor. This leads us into 'Newborn', a song about heartbreak and death. Cheery stuff. A powerful track which I was not previously party to.

To end the set Guy orchestrates a mass sing-along to 'One Day Like This'. Judging by the reaction, you would have thought this was a classic from Elbow's past but no, this is a four-week-old cut from the new album and the crowd sing it back to him with glee, although it is due to be released as a single in June. Could this be their 'Run', the big breakthrough that could make them as big as err... 'Snow Patrol'. Perish the thought but they deserve success.

'One day like this a year would see me right'

Yep, not a bad night out.

After the band leave the stage to rapturous applause, the crowd strike up the song again and keep singing until Guy and Craig return to play 'Puncture Repair' while the rest are allegedly on a 'fag break'.

I look behind me and L is still there on the steps and hasn't tottered over into the non-mosh pit. Thankfully no embarrassing stunts from her tonight.

They continue the encore with 'Station Approach', then to finish Guy goes into the crowd and hand picks ten lucky souls to join him on stage to dance and sing along to 'Grace Under Pressure'. Naturally he chooses the best-looking girls together with a few guys to make it not look too obvious. Although he does seem to let some plonker slip through the net.

So L reckons they're mushy, I reckon mournful is a better word, which isn't the same thing at all. Mushy/mournful works though because L is easily romanced later. I would have quoted some Elbow to her, had I been able to remember the words.

Thank God for the internet.
Posted by FitForNothing at Monday, April 14, 2008