A long Sunday morning in bed, perfect, especially if you're a collie. Then we drive over to Derby and I treat L to my Borrowash to Pride Park running route. Which makes a nice change for her but obviously not for me. It's a good long run for Doggo, around 13km I reckon. I can tell from the look on his face that he fears he's been duped and a 'dumping' is on the cards this evening.

Back home we have a late afternoon breakfast/lunch/tea sort of thing, then Doggo gets his anticipated 'dumping'.

We pop into Cast for a couple of Leffe's to steady our nerves for what is to come. Of course it would have been easier to 'just say no' but I didn't and thanks to OMT (that's Open Mind Theory for new readers) here I am at Rock City seeing 'Scouting For Girls' who I recklessly got tickets for before I'd listened to their album.

As I sip my Leffe I ponder how I can objectively review this 'phenomenally' popular band because despite reaching number 1, their album is one of the most painful aural experiences I've had for a long time. They did postpone some shows last week because the singer has lost his voice. I had my fingers crossed for a slow recovery but then again, just like the dentist, it's best to get these things over with.

First up support band 'Clocks' from Epsom. A band who 'specialise in short and bittersweet, powerful and punchy pop-rock nuggets concerning new love and old valve radios, delivered using the tried and tested guitar, bass and drums method but rendered with sufficient vigour to make it all sound fresh, original, brand new.' Their words not mine. In reality they manage the trick of sounding like everybody else and nobody at the same time. They have a new single out tomorrow you know, I'll not be buying it.

During the interval the teenage girls in the audience, of which there are an unhealthy amount, in quantity and size, are screaming already. I'm not sure if this is just a natural reaction to too much WKD (e.g. one bottle) or whether they fancy the roadies who are setting up the kit because that's all that's happening up on stage. Perhaps they just like screaming.

Then, OMG, things get worse when they pretty much all start doing a mass karaoke of Kate Nash's 'Foundations', it's so high pitched it sounds like they're on helium. You have a right to be worried and any sane individual would have left the building at that moment.

Suddenly before anyone can escape, the lights go down and 'Scouting For Girls' come on stage to an Elvis backing track. Naturally you'd expect them to follow this with their single 'Elvis Ain't Dead' but it doesn't happen, in fact they close the set with that. Instead we get 'I Need A Holiday' an album filler track if ever there was one but the crowd go wild for it all the same, singing every word, on helium.

Hailing from Ruislip, SFG are a threesome of Roy Stride on vocals, Roy Stride on piano, and Roy Stride on guitar. Only kidding but it's easy to forget that there are two other members, Greg Churchouse on bass guitar and Peter Ellard on drums. Their contribution to the evening is minimal and I suspect their input is possibly turned down in the mix to keep the spotlight on Roy. This is a shame because I find Churchouse, clad in his 'Mr Bump' t-shirt, much more interesting than Roy and his occasional backing vocals more enjoyable than our Roy's. Also for this tour they have added a fourth member on guitar, a chap who apparently used to be their soundman. This allows Roy to concentrate on, well being Roy. 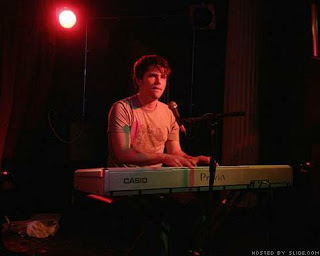 Musically, he's no doubt a talented pianist but he makes for an immensely irritating front man. He is constantly running around the stage, basking in the adulation he's getting and ramping up the audience, not that they need it, being already full of helium and WKD. Roy tries terribly hard but I'm not for the taking, although the previously converted are already in his pocket. The girls are going mad for him. Which is no mean achievement for a band, who couldn't be more Radio 2 if they had Terry Wogan on drums.

One thing that bugs me, well actually one of many things that bug me, is that during every single track he has to stop the song part way through to say something or involve the audience in something or simply to just be Roy. It all means they never get any momentum going and it's all gets very repetitious.

For example, during 'Mountains Of Navaho', which is one of their rockier numbers, as it's starting to get going he stops and we get a silly moment as Roy tries to get the crowd to wake up their bus driver. He's a chap called Dave who is affectionately, or not, known as Rambo. Well, if you must but do you really have to do it in the middle of a track.

He also has a tendency to repeat his lyrics until they are lodged in your skull, as if they've been put there with a lump hammer. The problem with this is that he has some of the most perversely awful lyrics you'd ever want to meet and if you met them in a dark alley you'd run a mile.

'She's a strawberry milkshake, she's as sweet as a peach but she's ice cold' eh? Let's all sing along... err no.

Stride is 29, although he doesn't look it, but he's still old enough to know better.

When he launches into a cringe worthy rendition of Carly Simon's 'Nobody Does it Better', as a tribute to the 'fans', I'm tempted to hit the bar because I know where this is leading. If I had not been driving I'd have had a very large Jack Daniels.

Unlike the false start with Elvis, this time they do continue the Bond theme but with a taped version of the James Bond theme. During this they disappear off stage, presumably for a lie down, while we listen to it blasting out of the speakers. Finally after one of the longest lead ups in pop history they reappear, to a huge ovation naturally, as if it’s an encore, and perform the biggest non-surprise of the evening by treating us to their song 'James Bond'. A song about wanting to be like Roger Moore, accompanied by a thousand high-pitched voices screaming 'just for a day'. Truly shocking. 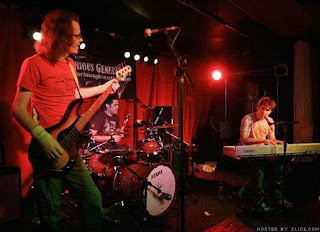 To be fair, he makes the most of what he's got, without his exuberance they'd be nothing and admittedly 'Heartbeat' and 'It's Not About You' are half decent pop songs but there's also an awful lot of dross as well.

To his credit he freshens up the set with new songs and b-sides, a song about 'Glastonbury' and one called ‘Fitter in your MySpace Picture’ to show he's kind of hip but most of his influences seem to be older figures, Elvis, Roger Moore and Michaela Strachan...

Ah yes, that 'legendary' number, 'Michaela Strachan You Broke My Heart (When I Was 12)', makes an appearance and obviously goes down a storm.

Roy sings 'When I got home from school, she was there in her wellies, and a yellow Cagoule'. Oh please, pass the bucket.

Some girl wanders up the steps towards us singing the words. Gross.

Perhaps his lyrics would be brilliant if they weren't so tragic. Thing is he doesn't even appear to sing them with any hint of irony; he appears to be deadly serious.

'It ain't gonna happen for me and the Strachan'.

It just ain't gonna happen for me and Mr Stride either. Sorry mate. Enjoy Radio 2. Give my love to Terry.

I'm feeling a bit nauseous but it's L who cracks first and faints. One minute she's behind me, the next some chap's tapping me on the shoulder and pointing to this body on the floor. Bugger and we had such a good spot too. Daughter looks livid when she thinks we've 'done a runner', even more so when she realises we haven't and realises she's lost her spot.

I hope L's not been overcome with passion for Roy, she has conceded that he's 'fancible'. Not got to the bottom of that one yet. It's just my opinion and I'm not a teenage girl, then again nor is L, but I think he's amazingly ordinary.

They return for an encore and finish the night, as expected with 'that' record. 'She’s So Lovely’ is ok, average enough with its 'She’s flirty, turned thirty, ain’t that the day a girl gets really dirty' lyric. He might even be getting perceptive about something there.

Everyone has to start somewhere with their music and you can't get more entry level than this, simple it certainly was. A band that you could take home to meet the parents, that is if you parents aren't here already but don't do it kids because you parents will probably run off with them. All the way to Radio 2.

41 units this week, not good. Two nights out catching up with old friends in the same week isn't a good idea.
Posted by FitForNothing at Sunday, April 13, 2008