They Don't 'Do' Numbers Anymore

In the car today, partly because I wasn't yesterday and I need to go to Sainsbury's but also because we have 'another' manic evening planned.

L runs from work to Pilates while I head home. I cook pasta and do the dog before being summoned to collect L. Naturally Doggo comes along for the ride.

L's been telling me she's been looking forward to tonight but she had me worried last week when she mentioned the upcoming Sunshine Underground gig. So she could be in for a disappointment because that's not who we're seeing. Tonight its Leeds oddities ¡Forward, Russia! with their artful industrial rock and interesting line in typography. I really need to get a few more long words in, I think I've been slipping of late and I don't want complaints.

We miss the interestingly named 'Cats and cats and cats' but catch the end of 'Johnny Foreigner' who are an intriguing three-piece, two lads, one girl from Birmingham. They produce one hell of a noise with their fast and loud, scuzzy guitars. They consist of a slightly mental guitarist (male), lots of whaling and screaming, together with his slightly calmer sidekick on bass (female). Between them they enjoy quite a bit of boy-girl vocal interplay, well mainly shouting. It's actually quite a potent mix, a bit like the Subways on valium. Oodles of energy and an interesting aggressive sound, rough at the edges but also rather charming, worth another listen. 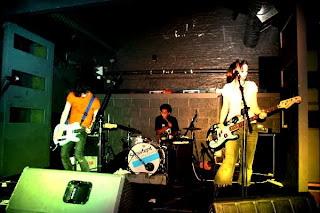 Last time we saw ¡Forward, Russia! we were in the sweatbox of the Health & Safety nightmare that is Junktion 7, tonight we have space and room to breathe in a half-full Rescue Rooms. Daughter is with us again but it's her first time at the Rescue Rooms. She gets asked for id at the door to see if she's allowed to order food. I think the girl on the door had had too many shandies, I think she meant drink!

Tickets obviously haven't apparently been selling like hot cakes, it’s clearly going to be an intimate gig, and we don't have any problems getting down the front. Where the road crew are double and triple taping the cable to the main microphone which means that the band must be due and said microphone is in for a bit of ill treatment.

Guitarist and main spokesperson Whiskas introduces the first track, 'Spring is a condition'. Yep you heard right, the band that only did songs by numbers now have tracks with proper titles, you know with words in them. They don’t ‘do’ numbers anymore. This seems to be to allow them to let they're imagination run wild, hence we get titles like 'Don't reinvent what you don't understand', which is second up tonight.

Yes, from a commercial point of view, I can see the point of titles but personally I would have retained the numbers alongside. The band will never sound 'commercial', I mean you're unlikely to ever see a ¡Forward, Russia! CD on the shelves of your local Tesco. If you ask Mr or Mrs Average about the band, you'll probably get a very blank look. This is probably why the turn out tonight is slightly disappointing. The numbers were a good gimmick and bands need gimmicks.

The average person, perhaps, just isn’t ready for Tom Woodhead but all the same, welcome back Tom, we've missed you screaming in our faces. From the moment the first chord is launched, he is off on one, into his usual manic convulsions, as if his feet have been plugged into the mains supply. 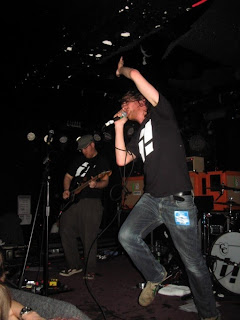 The punk-funk of 'Twelve' gets the crowd moving and Tom too of course, spiralling himself up in his microphone cord as he launches into something I assume he thinks is a dance routine.

Next we get a brooding rendition of last years 'Don't be a Doctor' and recent single 'Breaking Standing' which highlights their newer more gentle sound. A record that was of course criminally overlooked.

'A Prospector can Dream' is more like their old tried and tested formula, with its pounding, dense rhythm. Whereas a lot of the new 'Life Processes' album sees them adopting a generally more thoughtful sound.

We get a couple of 'numbers' from 2006's 'Give Me A Wall'. One of my favourite albums of that year. I get a poke in the back as L's favourite 'Nineteen' makes an appearance followed by another old favourite in 'Thirteen' accompanied by the appropriate vocal histrionics from Tom. 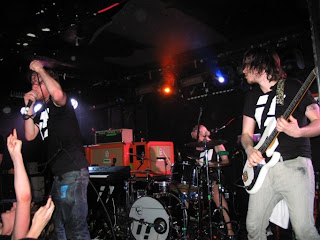 Tom is now giving the microphone, the expected ill treatment and swinging it around his head. Thankfully it looks like they've done a good job with that extra tape and there's more room on the stage for them here, at Junktion 7 it appeared as if they were practically stacked on top of each other.

Bassist Rob Canning is his usual anonymous self while Whiskas chitchats with the crowd. He tries to get some football banter going as it appears he's a Forest fan despite the fact that the band hail from Leeds. It falls flat because I think most of the audience are transient students and not locals. He makes his apologies to a chap who he was watching the football with next door because he told him that they expected to be on stage at 9.30, when in fact they took the stage a 9.00. 'Yeah, you bastard' comes the reply. Apology accepted then.

Last time, the perspiration was simply pouring off Katie behind her drum kit, regrettably tonight it isn't. In fact she plays the efficient ice maiden throughout and barely breaks sweat.

Newbie 'Gravity and Heat' with it's quieter, prettier parts leads us into their debut record 'Nine', which still sounds fresh and different. Tom promptly goes off on another yelping hissy fit, gyrating away to the juddering beat.

Whiskas tells us we're a 'nice audience', as long as we haven't got our Daughters locked up in our basements. Topical eh? I'm not sure there are many here who have Daughters and ours is stood beside us.

Towards the end we get the predictable bingo calling routine as people shout for their favourite tracks by number. I'm not even convinced that some of the numbers being called actually exist as tracks. 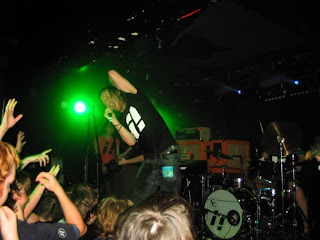 They finish with two new tracks. One of those new wordy titles 'A shadow is a shadow is a shadow'. The new stuff doesn't quite grab you by the throat and spit at you like the old stuff does but it's still not bad. It's more melodic and with tracks like the nine-minute long 'Spanish Triangles' which they close with tonight, they try and be 'epic' but I'm not sure it totally works. A song they describe as 'needing to get out of our system'. They are joined by Bentley the technician on guitar, although his talent in this department seems limited. I think he's there to add a bit of glamour, I think L fancies him.

They return very swiftly for an encore, as if they were worried the crowd might change their mind. They play a storming 'Fifteen', part two naturally.

¡Forward, Russia! may not ‘do’ numbers anymore but they still do throbbingly good gigs.

Back home, slightly deaf and with 'Fifteen' still throbbing through my head we retire to bed, where it appears that L's knee is much better.
Posted by FitForNothing at Tuesday, April 29, 2008