Love, Squalor But No Swordfish Bikini

Doggo and I are at a dog show today but looking at the schedule we have our first event at 8.30am but probably not any of our other three events until around 2pm. The temptation to skip the first event totally and thereby free up the entire morning for lounging around in bed with L is huge. In the end I compromise and decide to turn up late for the first event and hope we can still do it, this at least allows for an extra hour or so in bed.

When we get there, we do manage to fit the first event in but because we weren’t there on time we don't get the advantage of walking it. Despite that we do a clear round but the jobsworth of a judge eliminates us because having been so pleased with Doggo, I slip him a treat before we leave the competition ring. This is against the rules but I, like a lot of people, have been getting away with it for years.

I was a touch over optimistic with my prediction of 2pm for our next run; its 3.45pm when we finally get our second run and then we do three in quick succession. There's one key point to mention about our first run this morning, there were no weaves in the course. So our 'clear' round this morning is followed by two weave failures and then finally a clear round in the last event that didn't have any. We probably got a placing in that but by now it's 5.30pm and I don't stick around. I head home, we have another gig tonight. The results will be on the internet sometime in the next millennium.

Perhaps it's all because I forgot to get any sausage for Doggo. As L pointed out last night 'He'll be worse than useless without a sausage inside him'.

It's our third time at Rock City in seven days and we arrive nice and early, and catch most of the support band, Oxford Collapse. They are from New York, just like tonight's headliners but more specifically from Brooklyn, which according to We Are Scientists makes a difference. Oxford Collapse are not a new band, having three full-length albums to their name dating back to 2002. They are pleasant enough without being spectacular. A lively jangling guitar sound, that has been compared to early REM but I'm not convinced by that evaluation. Much to the delight of the crowd they are joined on stage by Keith from the Scientists for a couple of songs.

Just after 8.30, early because it's a Saturday, the Scientists take the stage. Now cut down to a two-piece of singer Keith Murray on guitar and Chris Cain on bass after the departure of drummer Michael Tapper late last year. Their numbers are swelled tonight with the addition of a replacement drummer Adam Aaronson and an additional keyboard player Max Hart who also adds occasional rhythm guitar.

They open the set in the way the new album opens with 'Ghouls, which sounds rough as they don't appear to have the sound right, before explo-oh-oh-oh-oooh-ding into 'Nobody Move, Nobody Get Hurt' which sends Rock City mental. About half way through that song they do seem to correct the sound, although L begs to differ. She's disappointed that the sound the band seem to prefer to put out live is much rougher than on record. In a way she's right, there is probably a touch too much bass and the vocals a bit too low in the mix. The wall of sound they turn out did often swamp the tunes. They are also very loud. 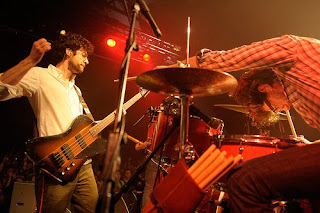 Having jumped from the new album straight back to the old, they stay with 'With Love And Squalor' and play the first three track off it, in order, before returning to the new stuff to play that song about teenage girls and their contacts lenses. Sorry, couldn't resist that one, private family joke. After 'Impatience' they continue to alternate between their two records, playing pretty much all of both of them. Which did mean there were a few not so good ones in there.

Between songs they 'entertain' the crowd with their inane wit. Stuff like asking if anyone is wearing a swimsuit. Keith confesses he is, a two-piece bikini with sharks and swordfishes all over it. It sounds improbable but you get the impression, that with Keith, it's not actually too far fetched. 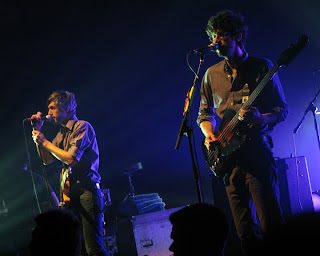 We also get banter about other bizarre things too, along with some Nottingham references. They got some right, Robin Hood and the Sheriff of Nottingham but what was all the stuff about King Arthur? Very weird, they're at least 150 miles out. American humour eh?

A bit of a bugbear was the 'flawless' transitions between tracks or rather the tactic of running one track into another, which I didn't like. This they probably had to do to make up for the time they wasted chatting or else they wouldn't have got more than half-a-dozen songs in.

That apart they certainly knew how to get the crowd going, take note Roy Stride, and the energy that the band conveyed especially by Keith rubbed off on the crowd. The whole place was buzzing. Keith gets his shirt ripped open when he goes into the crowd, there's no swordfish bikini, the rotten liar!

Down the front is where it's all happening and Daughter has requested being accompanied down there. I'm tempted, although it's that packed near the bottom of the steps that we're perched on, it would be a nightmare to fight a way through.

Michael Pace from Oxford Collapse returned Keith's earlier favour by joining them on stage to perform 'After Hours'. A song that does my head in because it's got a really familiar guitar rift in it that I'm sure they've pinched from somewhere but I can't think where. 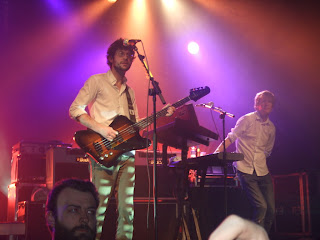 In fact the new album seems to have plenty of outside influences but when they play 'Tonight' tonight, it sounds like, well no one but 'We Are Scientists'. Chris confesses that the new album 'Brain Thrust Mastery' isn't actually new at all as it's been out in New Zealand for three years... hmmm.

They close with an excellent 'Lousy Reputation' and the overrated single 'It's A Hit', which wasn't.

They return to the stage for an encore to a roar from the crowd. 'That's What Counts' is followed by 'Lethal Enforcer', a good track that to me borrows a lot from, of all people, 'Hall and Oates' They conclude with a bang, to the crowds delight, with 'The Great Escape', which pretty much everyone was jumping about to.

A good gig. Storming you might say, if a bit rough at the edges but I like a bit of rough. I head home with sore ears.

Get home and take a huge bowl of strawberry cheesecake to bed which could be seen as a bit perverse particularly if I'd sung some Scientists at the same time,