Doggo and I are up early for the trip up to Scunthorpe for a dog show. The last event up there was snowed off a fortnight ago and again the weather threatens to enhance the weekend. Hail is forecast today and snow tomorrow for the duathlon. Nice. The show though is on and when we get there the weather isn't actually that bad. We get the odd shower but it's generally sunny although with a biting cold wind. So we finally get our 'summer' dog season off the ground, kind of. I say kind of because one problem remains. The dog.

The first course looks our sort of thing but Doggo misses his first weave and his contacts are rubbish, although legal. Course two and despite being desperately slow, he’s very precise but he has a pole down. So, two runs down the drain with one to go. I'm sure he's exacting revenge because I ran with a girl dog on Wednesday. Hopefully that's my penance served now.

I'm looking forward to the third course because I’ve been watching the judge all morning, who's been judging grades 6 and 7 and he set them a real stinker of a course, exactly the kind of sadistic course we like. If he just makes a few tweaks here and there, to placate the moaners who will otherwise say it’s too hard, it would be fine for us grade 4 and 5's. Unfortunately instead of doing that he rips the old course up and puts up a far similar one with loads of straight lines, e.g. perfect for fast dogs, e.g. not perfect for us. All the same that's no reason for Doggo to go in the wrong end of the tunnel and get us eliminated and again his contacts were rubbish. So we're not speaking. I grudgingly give him some of the chicken L has bought me for lunch, not processed and not cheap as she points out. He doesn't really deserve it but she probably bought it more for him than for me in any case. I put some loud music on in the car, just to annoy him. At least we get home in reasonable time.

After some carbo-loading thanks to the pasta that L has prepared, we head off to Broadway. L invites Son but he declines, again before asking what film we were going to see. She says that means he’s spoiling for three chillies in his curry next time she cooks. She’s taking it all so personally.

I was going to be AF, I honestly was. I was going to have mango juice, but when there's something dark and strong pouting at you across the bar, you just have some, don't you? I do, but only a half, and it's wonderful. It was Milestone Dark Galleon 5.4% by the way. I consider sending Daughter home on the bus, after the film of course, skipping the duathlon tomorrow, and staying for four pints or so but I don't.

Tonight, ‘Son Of Rambow’. Set in the early 1980's, somewhere in Hertfordshire, the movie concerns a young boy named Will Proudfoot, who comes from a family hooked on the Plymouth Brethren religion. The Plymouth Brethren reckon they are God's 'chosen ones' and their beliefs keep Will 'sheltered' from music, TV, books and other ills of society. Instead he channels his imagination into doodles on the toilet cubicle wall and elaborate drawings scrawled all over the pages of his bible.

He's not even supposed to mix with 'ordinary' folks but as he's at a normal comprehensive school this is inevitable. This is how his oppressive little world collides with the totally extraordinary one of Lee Carter, the school tearaway, amateur bootlegger and filmmaker. When Lee ‘saves’ Will from punishment at school, he manipulates him into being his stuntman for a film he plans to enter in the BBC Screen Test competition. You remember Screen Test don’t you? Michael Rodd and all that. It ran for years until it was axed in 1984 after it was entrusted to Mark Curry. The prize for winning the young filmmakers' competition was usually a movie camera. I remember wanting to send a film in myself but the problem was no one I knew had a camera and the only way of getting one seemed to be to win one on Screen Test but first I needed a camera... so it never happened.

The two boys are similar in some ways, both lack positive influences at home. Will’s died whilst mowing the lawn and his mother is... well... Plymouth Brethren. Lee has no parents at home at all, his mother seems to be permanently abroad, he lives with and seems to look after his elder brother, bizarrely in a care home for elderly folks that they own. One of the patients turns out to be Eric Sykes.

In other ways the boys are polar opposites, yet they form an unlikely friendship. One moment at Lee's house, changes Will's view on life forever. He gets to see a pirated copy of 'First Blood' on the forbidden television and suddenly there is something to channel his imagination into. The boys set about a remake of sorts of 'First Blood' which they call 'Son Of Rambow'. Will turns out to be practically indestructible as, in his role as stuntman, he tumbles from trees, gets catapulted through the air, and swings from a rope into a lake, even though he can’t swim. 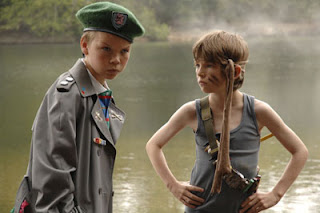 They get on great until a French exchange student called Didier appears on the scene. He, along with his entourage of English pupils, muscles in on the film and everything goes pear-shaped. The film dwells too much on Didier where the main interest is really Lee and Will but despite that flaw we still get a terrific offbeat story of growing up and discovering friendship via rebellion. It’s all terribly predictable but that doesn't matter at all. 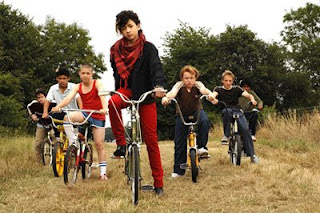 It's funny but not slapstick, it even made me laugh. It's touching but not overly sentimental. It’s light entertainment but also has some more serious subplots. Indoctrinated child escapes from psychological bullying by religious group?

It's also a great chance for anyone who grew up in the 80's to do a bit of reminiscing. There's loads of great period detail with new wave fashion, music and some superbly exaggerated stereotypes. Then there's the excellent flying 'guide dogs for the blind' Labrador-shaped charity box. Remember those?

There are also some wonderfully irresponsible messages in there, such as the impression that you can light a cigarette by connecting yourself and your friends to the mains electricity. Don't try that at home kids.

On top of that all the performances are excellent, especially those by all the children. 'Skill on toast' as they said in them days.
Posted by FitForNothing at Saturday, April 05, 2008