Ratcheting Up The Chilli Count

I roll out of bed again at some unearthly hour to be met by a thin layer of snow adorning all the rooftops. I knew it was a mistake to enter the Derby Double Decker, or whatever it's called. It was the free sausage cob that swayed it. I'm too easily persuaded.

We head off to Repton School, which is where the event is being held. Apparently its a very scenic location, not that I'll have time to notice. 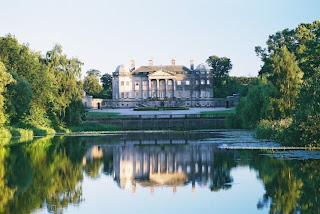 L heads off for a run around the bike course attached to Doggo. There's no sign of my father, who usually supports me at these events.

Just after 8am we start and depart on the first of three 2km runs which will be inter-spliced with two bikes of 12km. There are 44 entrants including 7 relay teams, one of which includes the school’s headmaster. As we run around the school grounds, we make fresh tracks in the snow. The pace is inevitably fast and I feel I do well to finish the first run in 12th place. Now all I've got to do is to try and hold that position on the bike.

It's been a difficult decision to know how many layers to wear. I'm hot after the run but soon get cold hands on the bike, despite my gloves which have been kindly lent to me by L. Thankfully all the roads are clear of ice and snow, so all I've got worry about are my fellow competitors and my gears. Yes, I'm still having problems with my gears, so I do the whole thing in a low gear set. I'm not risking changing up in case I can't change back down again. I shall blame that, and not my lack of bike skills, for the reason I lose quite a few places. About three quarters of the way around we see L and Doggo. Luckily Doggo doesn't see me; some bush seems to be holding his interest. L looks relieved.

Back into transition and onto the second run. The whole event is rather fast and furious. It's also actually really good fun but I quickly realise that in order to do well, a good transition technique is called for and I don't have one.

The second run is hard work. I gain a place and lose a place. Then towards the end I'm surprised to catch up with a fairly normal looking girl, e.g. not a psycho. I was pretty sure that I'd outran all the women on the first run and none had come past me on the bike. I assume they're all biding their time until the second bike. So it's all bit bemusing but then she hands over to a chap for the bike and I realise that she's part of a relay team. Relief.

I'm pretty much all alone on the second bike; I can see a chap a fair way in front of me but no one behind, not that I look. Got to stay focused. No one comes past me and I manage to hold my position, which is unexpected but good. Still no women. How odd.

Then for the first time I see my father, a bit late but never mind. I find out later that he'd mistakenly driven down the run course looking for the car park and got stuck in the mud. Thankfully he was pulled out before he managed to disrupt the race. That could have been embarrassing. He's been trying to phone me but I've been a bit busy...

As I cycle towards transition, Doggo is there cheering me on, as is L. Well I think she is but she seems a bit preoccupied restraining a stupid collie. So to the final run and there's a chap in front who looks catchable, so I have a go but he isn't. There's also a chap behind me, who seems to be having a fair attempt at chasing me down but thankfully he doesn't manage it. I find out later that both of them were from relay teams, so with fresher legs than me but they weren't really in my race anyway.

I come home in 20th place, although three relay teams were ahead of me, so 17th really. A passable performance I suppose. I was also 4th Vet, so nearly got a prize for top three in that. If the organiser hadn’t decided to run and come 2nd I’d have got something. More importantly I beat all the women. Oh, go on then, I'm euphoric.

I just need to work on my transition. The organiser, who came in second overall, tried out the tactic of keeping his helmet on for the second run which, with helmet straps being particularly fiddly with cold fingers, was not a bad idea. Another chap tells me afterwards that he did the run in mountain bike shoes, so no shoe changes, which I'm not sure sounds that much fun but then again he did beat me.

The downside of the morning is that after being seduced into entering by the lure of a sausage cob, there turns out that there aren't any. They have ham and cheese rolls instead. I don't have one but Doggo does along with several cookies. L says he deserves them because he's run further than I have. Hmmm, technically I suppose he has.

After the presentations, as is traditional, I assume, all the women take their battle-scarred men home to sooth their saddles sores, and vice versa for the women competitors I presume.

Later L has a romantic afternoon with Daughter at '27 Dresses', which sounds like hell, while I do a bit of homework with Son, which also sounds like hell but actually isn't too bad.

In the evening we head off into town for a post-race beer, basically to see if the Dark Galleon is still on. It still is, but it's clearly 'on the turn'. We have one and move on. At the Kean's the Slaters is tempting but typically runs out before I get one. After two Preservations, that runs out too, so faced with something 'golden' we head for home.

Back home, L tries to kill us all with an evilly hot spam curry, which I'll be reliving tomorrow I'm sure. It's all Son's fault for ratcheting up the chilli count by annoying L but I suppose a double duathlon deserves double chillies...

I also feel I've earned the glass of port that I take to bed.