The Day Of The Streakers

I take Doggo on park which is packed. I suppose because it's sunny for a change and it's also the May Day Bank Holiday. We pass an abandoned rugby ball on the park; that is until two figures run out of one of the houses and chase after it. There then follows a game where the lad tackles the girl, who has retrieved the ball, around the waist, drags her to the ground, lies on top of her, for longer than is strictly necessary before taking the ball off her and running off with it. Seconds later he inconceivably fumbles the ball conceding possession back to her. You can see the disappointment on his face, 'damn' he thinks 'now I have to tackle and lie on top of her again' and so it goes on.

In the afternoon I do a bit of homework with Son. Hopefully he'll get reasonable marks for his Pascal, now that I've given him a hand with it. It's a fascinating project that I would love to have really got my teeth into but I do love a challenge, even if the youth of today don't.

So I also miss the streaker, a Yorkshire lass with a lot of front. Not quite what the women's game wanted publicity wise, as it tries to get itself taken more seriously. 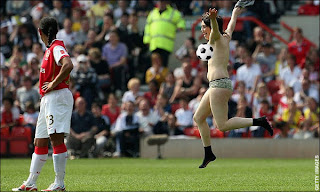 You don't get to see too many streakers these days, mind you there was one in the snooker too. 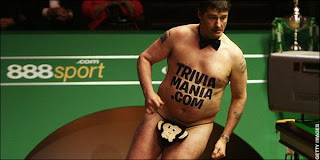 Later we head to Broadway and stay AF but there's no mango juice. Luckily they have other daring juices and I can safely say that papaya is the new mango.

Tonight's film 'Joy Division' is the second of two films focusing on the life and times of the influential Manchester band. Whilst not quite as entertaining as last year's 'Control' mainly because it lacks a big enough dose of Curtis, which was brilliant added by Sam Riley in 'Control'. As much as director Grant Gee would, I'm sure, have liked to interview Curtis, this was clearly not possible. It is still though an interesting and informative film, particularly for a fan like me.

It also lacks a contribution from Deborah Curtis, perhaps contractually bound not to appear, as it was her book that 'Control' was made from. It does though benefit from the insight of Curtis's lover Annik Honoré, who appears to be the only person who noticed, before the event, that Ian Curtis' lyrics were effectively his suicide note. 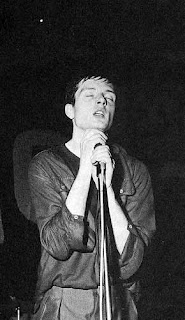 Grant Gee gets intelligent input from the three surviving members of the band along with other key people from the period such as Tony Wilson and Paul Morley. Regrettably contributions were also not possible from manager Rob Gretton and producer Martin Hannett both, and I did not realise this, are no longer with us. It's a good job they made this film when they were still enough people around to interview. Tony Wilson died not long after it was made.

Hannett, who developed their sound, was often acknowledged as the 5th member. There was a great quote from him, that the band were "a gift to a producer, because they didn't have a clue".

The film includes, as well as interviews, old footage, and new photos of 'Things That are Not There', important Manchester locations also no longer with us.

The film follows the band from their inception through to their eventual success and Curtis' decline with epilepsy and the severe mood swings caused by his medication. By 1980, Curtis had already attempted to commit suicide once but had failed. The band didn't seem surprised he'd tried again just shocked he'd succeeded.

The best parts of the film are of course the precious live footage and the excellent music. We also learn the origins of the famous album covers and the concern in the ranks after Curtis' suicide when they realise that the still unreleased 'Closer' has a tomb on the cover. 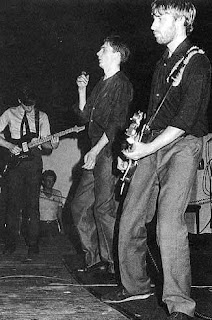 Within weeks of his death, their live favourite 'Love Will Tear Us Apart' was released and went top 10, giving the band their first hit. The album with the tomb on the cover soon followed. Popularity arrived at last.

At the end we see a recent performance by New Order, with the three remaining members playing 'Shadowplay'. This is overlaid on a clip of Joy Division playing the same song. Surprisingly it works quite well.

Joy Division are now more popular than they've ever been. Immortalised even, if ironically, by bands such as... the Wombats but that's another story, for another day, well perhaps Thursday when Liverpool's Marsupials hit Rock City.
Posted by FitForNothing at Monday, May 05, 2008