We Would Have Been At City Pulse Had We Known...

Dog show today. The first course we do is very twisty, the sort of course we like, usually, but in my injured state it's really going to test my knee out.

I get through it and we get 15th place which is a good start. We were actually equal 15th place and were due to 'run off' for it but the other person wasn't interested in such a lowly placing, whereas we're grateful for anything we can get these days, so it was ours by default.

Next we have a clear in the pairs competition, our partner, who is my 'new' dog, the one I trained with a few weeks ago, has faults, so we don't get anything.

Then we save the best till last and 7th place on a difficult agility course. A good day. I'm proud of Doggo and I don't often say that.

We are late getting home because my parents, who have come to watch, want to stop for cod and chips. This is horrifying because they're supposed to be watching their cholesterol. Which they claim they are, hmmm, just not very closely.

Championship play-offs today, for some reason moved from their usual place on Bank Holiday Monday. Hull defeat Bristol City. Good luck to them in the Premier League, they're going to need it. 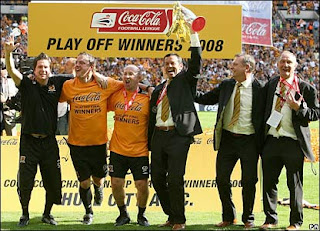 Can either them or Stoke beat Derby's points record? It looks like yet again the bottom of the Premier League is going to be far more exciting than the top. Also well done Phil Brown, their manager, a decent bloke who was unfairly expected to make a good job of managing Derby, at a difficult time and in very difficult circumstances.

I get home, dump Doggo, and head into town with L.

I suppose I ought to give some credit to Nottingham. They do try terribly hard but they always seem to cock things up. The Spring Bank Holiday weekend has been home now for a few years to the Dot-To-Dot music festival. Each year it seems to grow in size, to include more venues, more stages, more bands, and this year more days. For the first time this year, the festival was ran over two days, Saturday and Sunday.

So why this year, did the council try and undermine this roaring success for Nottingham by putting on a free musical festival in the Market Square at the same time?

Now don't get me wrong, a free musical festival like City Pulse is exactly what the council should be putting on but what's wrong with all the other weekends of the year, weekends when there isn't another festival going on in Nottingham. Why should people pay £40 for Dot-To-Dot if elsewhere you've got bands on for free. Ok, so Athlete might not be everyone's cup of tea, we've been there done that and didn't buy the t-shirt. In fact tonight we stayed in the Ropewalk and drank Leffe instead but that's not the point.

Actually we would have been at City Pulse had we known that Ben's Brother had pulled out at the last minute and been replaced by L's favourite, the Delays. She's still seething now. Funnily enough, we both reckoned we could hear the Delays but assumed it was coming from a bar somewhere. So just for L, here's a photo from Saturday, 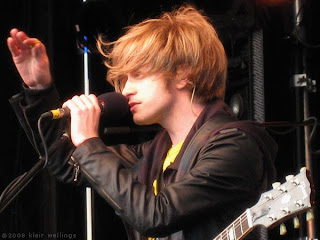 Photo Klair Wellings - www.klair.net
Posted by FitForNothing at Saturday, May 24, 2008