Picnic In The Pool

It's a miserable day again today. The rain I am sure is partly due to the fact that this week is National BBQ Week, billed as Europe’s largest celebration of the pleasures of alfresco dining. Perhaps not.

Despite the miserable outlook, I dodge the rain and stay dry, other than catching the spray off the roads. A good cycle, despite not de-edging myself this morning.

L reports back from the park that there are now several deer with their cards well and truly marked. Oh no, she's been out with her can of red spray paint again, marking up targets for the next cull.

She's working from home today, accompanied by Doggo, who is apparently spending the day sprawled out on his back with his tongue out. Apart from the park all he's done is see off some imaginary visitor, which apparently caused him to almost choke on his bacon. Bacon? Hmmm, the things that go on when I'm not at home.

Eighties favourites Yazoo have reformed and are coming to Nottingham. I'm tempted to say ‘lets go’, what with it probably being a once in a lifetime chance and all that. It could be good, they had the good sense to quit (or rather fall out) whilst they were still at the top of their game, so it should be good set. So despite the fact it's at the acoustically devoid and atmosphere free zone that is the Concert Hall, I'm tempted until I saw the price. £45. Ridiculous. The feeling on the web is that the price is putting a lot of people off going to see them, which is a shame but it'll serve them right if it's only half full. Money grabbers. 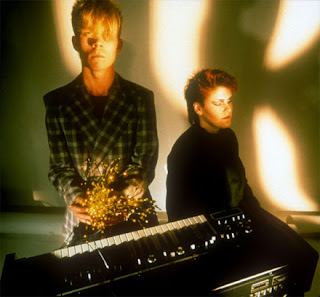 Just checked the date, we’re off to see Glasvegas on that day anyway, for a humble £7. There are simply too many good new bands around to bother spending such a lot of money on a spot of reminiscing, particularly when you've got YouTube. Footage from The Tube here.

and on Cheggars here. Cool. Alf looking almost slim there.

L checks out the links I send her then starts trawling through old TOTP clips of Depeche Mode. She says it's like old times. It is old times, my dear fellow old timer.

Come late afternoon it's throwing it down. Which should liven up the bike home, the paper round, and the tennis. Had I mentioned L and Daughter are playing tennis tonight? L did say it would guarantee rain. Did somebody say AF tonight...

I cycle home, somehow dodging the rain, and to the pool where I find a student party going on half way up lane one. There are about six lads in there, I think they're having a picnic and make swimming in there impossible. The attendants look concerned, they're good at that, and do a lot of hopping from foot to foot but don't have the guts to say anything. Instead they tell off a couple of kids in the beginner's pool for chucking water at each other. Cop-out. I really hope my old friend Mr Annoying-Stop-Start-Psycho swimmer turns up; one stare from him usually empties that lane.

I go for lane three where some swimming is actually going on. I toy, is that the right word?, with a couple of girls in there. Both are slightly slower than I am, so naturally I had to make sure I stayed ahead of them. When I stopped for a brief breather and one of them got ahead of me, obviously I had to make sure I got back in front of her. So it gave me a good workout.

I go and home and wait for the girls to return from tennis... and the sauna. Glad I missed that, I remember nearly fainting in the sauna in Austria. I head off to dog training.
Posted by FitForNothing at Wednesday, May 28, 2008