I can hear the rain falling this morning, so I roll over in bed and snuggle up to L. The rain does stop though and after getting L's assistance in testing out my knee, just to see if it was up to cycling, I decide I ought to give it a go after all.

The weather isn't actually too bad and I wouldn't have been damp at all, if it hadn't been for a few lorries 'sharing' the spray.

My cleats too, now appear to be ok. Instead today, I fall down a rather large pothole, that I'm sure wasn't there yesterday. This was on a stretch of road that was totally resurfaced just a year ago but has since been dug up again and left in a right state and full of potholes again.

They say that there are now so many potholes on our roads that it would take more than eleven years to fill them all in. Another problem is that local authorities are now paying out more in compensation for damage and injury from potholes, than they are on repairing them. The government, has of course, set a target to clear the backlog in filling in potholes by 2010. Don't hold your breath.

L's confirms that her old war wound is indeed playing up and although she's been to the gym, she did all of it standing up because she can't sit down. I wonder if she's still standing up now, at work. It's obviously affecting her sanity too because she's having cold toast and Marmite for breakfast, either that or it's some self-inflicted penance for something she's done.

After work I am again the uninvited one and my work colleagues run without me, five miles this time, I wonder if they're training for something. Something that I'm not invited to obviously.

I take Doggo on the park and we wander down to the South Lodge on Derby Road because it is closed for Health & Safety reasons. It's pulled quite a crowd and we expect to see a tree embedded in the Gatehouse but no, it looks like it always does; neglected and in need of urgent attention but not dangerous. Mystifying. 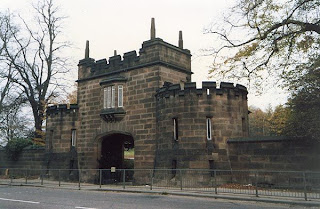 L runs to us on her way back from Pilates, doing her best impression of an uninjured person but I can see through it. Then again, perhaps I'm wrong because later I'm accosted into a goodnight clinch by the same girl in shorts and a vest which is rather better than sharing a Werther's Original at bedtime. If you don't read Mrs Mills in the Times, you probably have no idea what I'm talking about.
Posted by FitForNothing at Tuesday, May 27, 2008